Spying on Hamlet for laughs

And then, there's BOOM 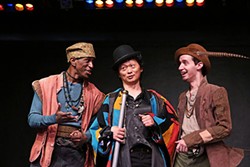 If you're playing Rosencrantz or Guildenstern in Hamlet, you're not exactly one of the Danish Prince's most formidable adversaries. On the contrary, you've been specially chosen by King Claudius to spy on your old friend Hamlet, who sees through your treachery rather quickly. You're not exactly peripheral, either: you come on early in Act 2, lurk fairly often onstage until late in Act 4, and the pair of you have nearly five percent of the tragedy's lines.

But the most telling comical point that Tom Stoppard makes about you in Rosencrantz and Guildenstern Are Dead, the playwright's 1966 riff on Shakespeare's text, is that neither of you has enough personality to distinguish yourself from the other. Winner of the 1968 Tony Award, the play is a centerpiece of the current Sensoria celebration of the arts at Central Piedmont Community College, a natural in the month and year marking the 400th anniversary of the Bard's death.

With a title that telegraphs the fate of its protagonists, there are easier scripts to produce. Other than the UNC Charlotte staging in 1992 directed by Bill Morrison (ranked as 12 on my list of best shows for that year), I can't recall a single local production that truly satisfied. On the contrary, each of the three revivals I've seen in the past eleven years, including this one at Pease Auditorium piloted by Tom Hollis, has come freighted with enough confusion and incoherence to make most audience members wonder: why?

To be fair, Hollis is working with the most inexperienced CPCC Theatre cast that I can recall. Yet at the same time, he and scenic designer James Duke try to keep things simple. There's usually an upstairs-downstairs distinction between the royals who dominate Shakespeare's stage and Stoppard's flunky protagonists. Costumes by Jamey Varnadore aren't lavish — down-market Elizabethan for the royals and courtiers, and a touch of commedia for The Player and his acting troupe.

Fifty years ago, it was only a slight exaggeration to declare that the pervasive influence of Hamlet in modern literature and culture was overbearing. Responding to all that was obviously a part of Stoppard's agenda in his offstage retelling. But 50 years ago, Stoppard could be fairly sure that nearly everyone in the audience — on both sides of the pond — was in on the joke. In Stoppard's native England, that's probably still true. In 2016 Charlotte, after overhearing someone in the lobby confess that she'd never read Hamlet, I'd have to concur that it would have been helpful.

Quick quiz: what was The Murder of Gonzago? You might want to brush up on that stuff before you spend two hours and 40 minutes with Rosie, Guildy, and the gang.

Of course, it helps to have Shakespearean actors playing those portions that Stoppard swipes from the Elizabethan master. Yet what I saw from Jacob D. Page as Hamlet, Cara Cameron as Ophelia, Nick Southwick as Horatio and Polonius, Dwayne Helms as King Claudius, and Kristina Blake as Queen Gertrude didn't convince me that any of them could give a credible full-length performance of any of those roles.

I did detect some promise in this group of nobles and even more in the actors that Hollis found for his leads, particularly Tyson Hamilton as Guildenstern, usually the straight man in the comedy. If Kyle Willson had delivered more broadly and confidently as the simple-minded Rosencrantz, the chemistry might have worked better. Similarly, I saw plenty to praise in Larry Wu's animation as The Player, but his scenes with the title characters lost traction as inevitably as the duo's dialogues.

A familiarity with the absurdist chitchat between Vladimir and Estragon in Beckett's Waiting for Godot is also recommended for all who plan to see or perform in R&G. Curiously, it was when the chitchat paused and Page appeared on the scene as the troubled Prince that my interest perked up. These are islands of realism in Stoppard's world, for our bumbling antiheroes actually behave differently when confronted with their betters.

In the bustle of Friday evening in Plaza-Midwood, I wasn't sure how many of the people crowding the nightspots were even aware of the new BOOM festival in their midst, and its special vibe. My wife Sue and I took in two events that night, On Q's Mo' Betta and Taproot's DinnerBell: Field Guide to Impolite Southern Conversation, and two more the following afternoon, Sinergismo's Not a Cult: the True, Unbiased, Authentic History of Sinergismo and Sarah Emery's Threads of Color.

It was far easier to find parking on Saturday afternoon. Yet the shows we saw were just as well-attended.

All the fare I sampled was delightful. My favorite was the spoofery of Not a Cult at Petra's Piano Bar & Cabaret. Mat Duncan was the Sinergismo Scholar, Dr. Reginald Haephestus Winterbottom, our guide to the sacred birth, copulation, sickness, celebration, and funeral rites of the ancient Gismo society, performed by re-enactors from Charlotte, their only known descendants.

Duncan likely concocted and directed all this fakery, including the first pair audience questions after the Winterbottom lecture. But who fleshed out the archeological spoof with the re-enactors' costumes, choreography, and ceremonial masks is open to conjecture. The artisan who sculpted the sacred mound from whence all Gismo life issued and to whence it returned is also shrouded in mystery. Likewise the bogus, cheesy props, including a dispenser for the healing mound squeezings, a mound flower, and a severed head.

Probably the best aspect of Duncan's performance was its lack of polish. Challenged by the planted audience member on why the mating ritual had omitted the jingling turtles, Winterbottom responded with the bluster of a true mountebank.

Mo' Betta was an old-timey mix of jazz, stand-up comedy, and improv poetry hosted by Quentin Talley. Jazz vocalist Kenya Templeton, backed by pianist Tim Scott Jr. and his trio, was the standout. Freed of the scripted constraints of last January's The Children of Children Keep Coming retrospective, where Marian Anderson and Ella Fitzgerald were her primary inspirations, Templeton floated beyond strict 4/4 time, sounding more like Betty Carter in an exemplary rendition of "Afro-Blue."

DinnerBell may add an "e" to its mealtime compound before long, since it was a compendium of feminine grace, hospitality, beauty pageantry, and genial racism that comprise the heritage of Southern belles. Brianna Susan Smith was the singer/narrator steering this "Field Guide to Impolite Southern Conversation" on its chameleon path — sometimes campy, sometimes satirical, and sometimes bluntly direct.

There were biscuits, deviled eggs, collard greens, and bread pudding served up by the same ensemble that vied in the Ms. Georgia Cow beauty contest. The Q&A at the end of that contest was the best part.

For her suite of seven dance pieces, Emery took her inspiration from the paintings of local ArtPop Street Gallery artists, each of them projected on a huge wall at Open Door Studios as the dancers performed. With Emery taking a solo in "Sixth Season" and former Charlotte Ballet standout Emily Ramirez included in three other pieces — and taking a cameo in yet another — the ensembles and soloists were consistently proficient. Wrapped into the community feel that Emery orchestrated in her show was a dazzling array of costume designers who diverted my eyes as excitingly as the dancers and the projected paintings.

A great start for BOOM and a great boost for Plaza-Midwood, where Actor's Theatre of Charlotte plans to land early in 2017. For more information and to help in making that happen, go to atcharlotte.org.