Steve Bisbikis was 9 years old the first time his dad dragged an old tomato box across the kitchen floor of the family's restaurant on Eastway Drive and positioned it in front of the cash register so the kid would be high enough up to see his customers. Steve dutifully hopped up and began his fist workday.

That was 30 years ago. Some things don't change. On a recent weekday, Bisbikis (pronounced Bis-BICK-us) is standing behind that same counter at the Steak 'n Hoagie Shop, pivoting from speaking Greek with his dad Paul, who has come in for a visit, to Spanish with members of the kitchen staff, to English with me as I chat with him about the little hoagie shop that's served residents of the Eastway and Plaza-Shamrock neighborhoods for the past four decades. 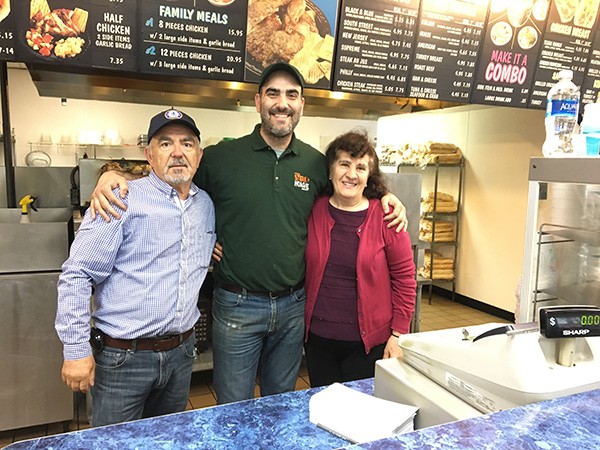 You can't miss Bisbikis if you duck into the shop on a random afternoon for a Greek salad or Philly cheesesteak. He's the guy in the baseball cap and brown polo shirt with "The Steak 'n Hoagie Shop" printed in orange and white letters on the left breast pocket. The guy whose very serious facial expression belies a deep warmth and palpable love for his employees and customers. To Bisbikis, this unassuming sandwich shop in the corner of a strip mall where Eastway meets Finchley Drive isn't just a business his dad handed down to him on a paper platter. It's his life.

"This is my passion. I love it," he says. We've moved over to one of the red booths in the dining area across from a big-screen TV that's almost always tuned to a ballgame. Bisbikis' mom and dad are in the kitchen cleaning and moving supplies around. A typical morning before the lunch crowd arrives.

"I think to be successful," Bisbikis continues, "you have to be passionate about what you do. And I don't mean just your job, but most things in life."

If what he says is true, the Bisbikis family has been wildly successful. Not successful in a Belk or Levine or Bechtler kind of way — successful in ways that really matter to an average American family of modest means. "We've been very blessed, to say the least," Bisbikis says.

When his dad opened the Steak 'n Hoagie Shop in 1978 as Gus' Submarine House, Greek ownership of restaurants across the United States was at an all-time high. By the late '70s, according to Peter and Charles Moskos' book Greek Americans: Struggle and Success, a whopping 20 percent of the names on the roster of the National Restaurant Association were identifiably Greek. One of those names was Paul Bisbikis, who had recently moved from Greece to Charlotte with his wife Alexandra.

"They had no experience in restaurants at all back in Greece," Steve Bisbikis says. "They pretty much worked farms and that's all. My dad picked cotton and my mom tended the house with her sisters, just helping out with all the family stuff. They pretty much grew up with nothing, and then they came over here in search of the American Dream."

In Charlotte, Paul initially landed a job washing dishes at San Remo on Central Avenue in Windsor Park; Alexandra worked as a short-order cook. A little more than two years later, they'd saved enough money to break out on their own.

"We started the business over there," the elder Bisbikis says, chiming in when he hears us talking about the restaurant's early days. He still speaks in a prominent Greek accent. "We were there for about two years." he continues. "Then in '81 we opened a second Gus' Submarine House on Sharon Amity, changed this one to the Steak 'n Hoagie Shop and moved it over here."

At first, the menu was all subs and cheesesteaks, but the Bisbikises later added current favorites such as the roasted chicken, hot vegetables and delicious Greek salads packed with fresh tomatoes, feta cheese, olives and peperoncinis. The business soon expanded to include other Steak 'n Hoagie shops, one of which still operates on South Boulevard. Steve's brother, Jimmy, runs that one. And Paul has since opened a wholesale bread company, Artos, that supplies both shops as well as several other locally owned restaurants including Zada Jane's in Plaza Midwood. Steve's three sisters also work in the family business, as does Alexandra.

It's not as if they had to twist Steve's arms. While he had plenty of friends and enjoyed playing soccer at East Mecklenburg High School, the younger Bisbikis spent most of his time in the restaurant. Even after he graduated and began studying business at UNC Charlotte, he'd come straight to the shop every day. "I would go to my classes and when I was done — usually around 11, 12 or 1 — I'd come back here and work," he says. "I'd do my homework after I got off at around 10, then go back to school in the morning.

What his father does these days, the younger Bisbikis jokes, is stop by regularly for a little daily micromanaging. "Dad comes through at least once a day and tells me I'm doing something wrong," he says. "He'll come in and I'll be doing what I always do and he'll be like, 'Do this, do that,' and I'll be, 'OK, dad. I think I got this.'" He laughs and looks over at his parents. "But I still love 'em."

Another thing Steve Bisbikis loves is working with his mostly immigrant staff and customer base. As a child of first-generation immigrants, he has an intuitive understanding that diversity is a strength in Charlotte, not a burden, as some seem to believe. Not that Bisbikis brags about being more enlightened than others. He doesn't even bring it up. I do. When I point out that I've noticed his fluent Spanish on several occasions, he just shrugs. "Yeah, I took a couple of courses in Spanish at UNCC," he says. "I mean, the Latino population has seen such massive growth in this area over the past 10 to 15 years, I wanted to learn the language. It makes the employees and customers feel more comfortable."

In fact, one night earlier in the week, a friend and I had come in for the Greek salads when I caught Bisbikis in the act of making a pair of customers feel more comfortable. A couple had walked in the door and Bisbikis, in perfect Spanish, greeted them and asked if they wanted their usual. There was no fanfare or excessive earnestness in his delivery. It was just a simple question asked nonchalantly.

When I tell him this, Bisbikis smiles. "You have to adapt sometimes," he says. "That's important to me."

He nods in the direction of the door. "When somebody walks in here and I've seen him come in before and I know he's eaten the Philly cheesesteak or the Greek salad or the roast chicken, and I can talk to him about it... well, that's what it's all about, isn't it? It makes me happy to know what he likes, and it makes him happy that I know. He's someone I know because I've seen him in here before and I've talked to him. I like that kind of interaction with people. People are not just numbers."

Not being just a number is important to Bisbikis, too. Back in the '80s and '90s, Americans fell hard for the big corporate restaurants you find in clusters along freeways — Applebee's, Cracker Barrel, Subway, Jimmy Johns. Local joints like the Steak 'n Hoagie Shop suffered, and Bisbikis felt his father's angst. But things are changing, he says — at least in Charlotte.

"I feel like people here have basically fallen back in love with local businesses, whether it's a restaurant or any other kind of shop," Bisbikis says. "Look at how King of Pops has done. They're everywhere now. People are just embracing this. And that's fantastic. It's what's made Charlotte grow from basically a small big city to a real big city.

"Charlotte's become more of a 'foodie'-type city, where people are more likely to be more adventurous when they go out," he continues. "They're thinking more about what they're eating — how it's prepared, whether local ingredients are used, what the service is like." For its part, the Steak 'n Hoagie Shop uses as much locally produced ingredients as possible, including the chickens used in the hoagies, chicken cheesesteak sandwiches and chicken salad. "I think [the culinary school] Johnson & Wales has helped a lot in that regard," he says. "Instead of just going into the nearest Subway for a sandwich, people are more likely now to come in here or go to another locally owned shop." 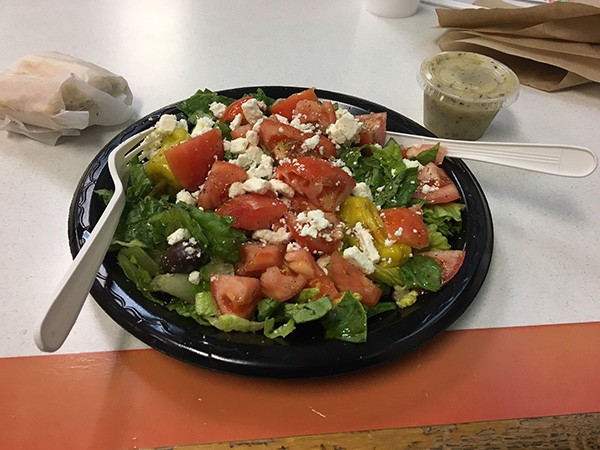 And going to another locally owned shop is just fine with Bisbikis. Local competition doesn't bother him one little bit. Not only does he embrace it, but when he's not at the Steak 'n Hoagie Shop — which is not often — Bisbikis is out searching for new locally owned businesses where he can eat and shop.

"I love to go out and look for great local food — local restaurants, local bars, local anything, actually," he says. "I live in the Cotswold area, but I like to hang out at places in NoDa, or Plaza Midwood, or South End. If it's local, I'm there."

Bisbikis furrows his brow. He's remembering some random customer's face from his childhood. He still sees a few people from that period, he says. "On the weekends, mostly Saturdays, I get customers coming in from Mooresville, Kannapolis, Concord, all over, because once upon a time, they either worked around here or lived in the area and ate here, and they've since moved on or gotten a new job. But they still want to come back and visit us.

"I feel like we're their little hidden gem," he adds. By now, the guy you'll meet at the register wearing the ball cap and a very serious expression is wearing a full-on, ear-to-ear grin. "And that's pretty awesome."

These days on those Saturdays, Bisbikis brings his own two sons, one 5 and the other 7, into the same kitchen in front of the same counter where he once stood on that tomato box ringing up those same customers whose faces he still remembers.

"My kids can't wait to work here," Bisbikis says. "My 7-year-old, he'll come in and I'll pull up a stool for him at the counter and he's already helping at the register.