The highs and lows of the sunny cinema season 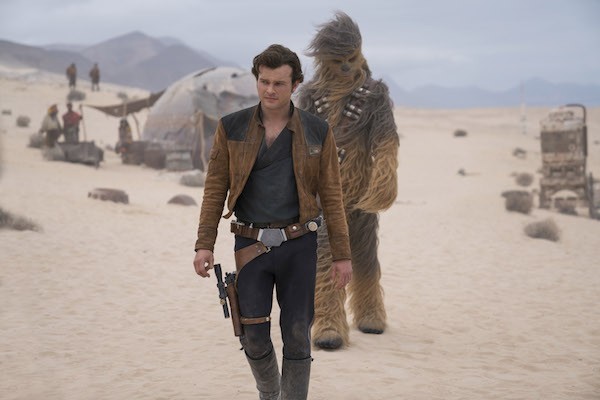 With summertime tragically on its way out, it’s time for the annual glance at the movies audiences and critics enjoyed (or endured) over the past four months. Here, then, are some of the seasonal highlights and low points.

Biggest Disappointment: Solo: A Star Wars Story. For the vast majority of my life, Han Solo has been — along with Atticus Finch, Indiana Jones, James Bond, and a few others — one of my defining cinematic heroes, which is why it pained me to see the character’s iconic dimensions reduced so drastically and dramatically in this ultimately unnecessary addition to the Star Wars saga. Those of us who grew up with the franchise since a young age and find it still rooted in our DNA deserved something better than a cash-grab that’s only moderately entertaining and not especially memorable. Clearly, this feeling was shared by many, as this has emerged as the first Star Wars film to lose money for its studio — consequently, plans for further spin-off films (Obi-Wan Kenobi, Boba Fett) have been delayed if not altogether crushed. Added insult: L3-37, the most ill-conceived, most insulting, and all-around worst character to be found in any film this summer.

Biggest Stateside Bomb: Skyscraper. Were it not for the Christmas smash Jumanji: Welcome to the Jungle, there might be more question marks circling the continued viability of Dwayne Johnson as a box office draw. After all, last summer found him headlining Baywatch, which ended up losing $11 million stateside, while this past spring saw his Rampage coming up $21 million short in U.S. profits. Neither, though, flopped as bad as Skyscraper, a generic action yarn that cost $125 million yet only grossed $67 million — a $58 million tumble. As with Rampage, it took the international audience to save the picture from total disaster, with foreign earnings up to $225 million.

Biggest Surprise: Mamma Mia! Here We Go Again. Considering I wasn’t a fan of the 2008 hit Mamma Mia!, I wasn’t expecting much from this belated sequel. So imagine my delight to discover that this outshines the original in virtually every department, with better singing, better dancing, and better humor. Bonus props to Lily James (Cinderella, Baby Driver), who is excellent “playing” Meryl Streep (i.e. the young Donna in flashback scenes).

Sexiest Stud: Andy Garcia. Forget about Tom Cruise, Chris Pratt, and the other boys of summer. Only Andy Garcia had the distinction of wooing the ladies in two films this summer. Book Club found him sweetly seducing Diane Keaton, while Mamma Mia! Here We Go Again saw him lavishing his attentions on Cher. In real life, Garcia is 62 years old — I guess people in that age group aren’t called sexagenarians for nothing.

Most Unexpected Reference To A Werner Herzog Documentary: Book Club. The character played by Candice Bergen hasn’t had sex in 18 years, leading one of the other ladies to quip that her vagina is a “cave of forgotten dreams.”

Most Expected Reference To A Sharon Stone Blockbuster: The Happytime Murders. Given the film’s focus on puppet pudenda, it’s scarcely surprising when a femme fatale flashes her forbidden felt a la Stone in Basic Instinct.

Best Tagline: “Opening Wide” – The Meg. A declaration that accompanies, well, pretty much every movie takes on additional meaning when it comes to this shark flick. The Warner p.r. department knew it, too, since the words on the poster were positioned directly inside the title creature’s gaping maw.

Most Dependable Movie Stars: Superheroes. Given the state of modern cinema, this isn’t exactly a surprise. Yet once again, summer was overpowered by colorfully garbed beings. Four of the five top-grossing movies of the season are superhero films (the one exception: Jurassic World: Fallen Kingdom), with a combined stateside gross of over $1.8 billion dollars. Naturally, the all-star extravaganza Avengers: Infinity War led the pack, with Incredibles 2, Deadpool 2 and Ant-Man and the Wasp also earning significant bank. As for the top-grossing film of the entire year, it’s also a super-saga: February’s Black Panther, which finally passed the $700 million mark in early August.

Least Dependable Movie Stars: Dogs. Say it ain’t so! Alas, man’s (and woman’s) best friend wasn’t able to sniff out much success with critics and/or audience members — a far cry from those long-ago years when Rin Tin Tin was the nation’s #1 box office draw. May’s Show Dogs earned rancid reviews while the August releases Dog Days and A.X.L. (the latter about a robotic canine) both bombed with viewers. As for the dog’s cousin, the majestic wolf, one starred in the August release Alpha — yet while that picture was greeted with strong reviews, it likewise failed to find an audience.

Movie I’m Most Sorry to Have Missed in Theaters: (tie) RBG and Won’t You Be My Neighbor? These two nonfiction features proved to be the sleeper hits of the summer, earning rapturous reviews and grossing enough to land them both on the list of the all-time top 25 moneymaking documentaries. I hated missing them in theaters; luckily, both are now just hitting Blu-ray, meaning my wait is almost over. Runner-up: Leave No Trace, which has a perfect 100% rating (from a whopping 182 reviews) on Rotten Tomatoes.

Movie I’m Least Sorry To Have Missed In Theaters: Death of a Nation. This was the latest propaganda piece from Dinesh D'Souza, known less as a filmmaker and more as a convicted felon, adulterer, spouse abuser (accused of kicking his ex-wife in the head), anti-feminist champion, anti-gay rights champion, pro-colonialism champion, and — naturally, given all the aforementioned — beloved right-wing hero. Incidentally, Trump recently pardoned D'Souza of criminal charges, so this is him returning the ass-kissing favor. The film’s claim that Trump is comparable to Lincoln was so laughable that even the corrupt president’s supporters stayed away, resulting in one of the summer’s puniest releases (among movies playing on over 1,000 screens, only Action Point and Bad Samaritan grossed less).

Best Film: Eighth Grade. Television and YouTube star Bo Burnham makes an impressive feature-film debut as the writer and director of this raw and realistic movie about an introverted student struggling to survive her last week of eighth grade before preparing for high school. Yet the real story here is the knockout central performance by 15-year-old Elsie Fisher — her work as Kayla Day will break your heart. Runners-up: First Reformed; BlacKkKlansman.

(Source: Box Office Mojo. All grosses are for U.S. only. Grosses as of Sept. 3.)