Sweets For His Sweet

A life lived around chocolate 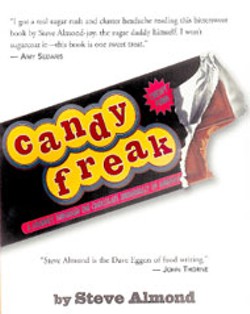 Imagine a drug -- an intoxicant, really -- that you can ingest for your pleasure every day. It's cheap and easy to get. Works fast, too. And it's legal. It's candy.

If you doubt the addictive power of candy, Steve Almond will lure you into his world of yearning with Candyfreak, a quirky but appealing memoir.

Almond is a self-proclaimed candy historian who begins with a look back to childhood for early evidence of the admitted "freak" he would become. He craved, devoured and hoarded candy, and soon became a connoisseur who lamented the extinction of his favorite goodies. And there were more warning signs, such as an incident when he realized he was older and taller than any other kid out trick-or-treating on Halloween.

But he never outgrew his jones for candy, especially chocolate, which seems somehow wired into our biology. Almond explains, "The primal pleasures of candy tend to elicit primal impulses," and, "The main reason chocolate is the ultimate physiological freak is because it's half sugar and half fat."

To make sense of his lifelong addiction, Almond sets out on a personal odyssey. He visits family-owned candy makers who make NECCO wafers, Valomilk cups, Goo Goo Clusters and others. These are the men and women who have survived the corporate buyouts and consolidations of the candy industry. The Big Three candy companies -- Nestle, Mars, and Hershey's -- have driven most independent candy makers out of business.

Critics are praising Almond for his big heart and his wild humor. But more memorable are his knife-sharp observations, most often turned inward; there's a deep vein of pain swirled into this multi-layered tale of chocolate obsession.

For all its deceptive lightheartedness, Almond's observations border on the bitter in some surprisingly candid moments, such as this one, in which he confesses to a peculiar father-son dynamic: "The bottom line here is that candy was, for my father and then for me, one of the few permissible forms of self-love in a household that specialized in self-loathing. It would not be overstating the case to suggest that we both used candy as a kind of antidepressant."

Even the pleasurable act of sharing a sweet treat evokes Almond's ruthless self-examination: "Occasionally, when I split a dessert with someone, I can feel myself gauging their consumption, figuring if I've gotten what I deserve...For those of us who grew up in a state of emotional or material want, the freak retentive lurks below all our selfless gestures."

Almond is already an accomplished writer whose short fiction and commentaries prepared him well for this book-length work. Some readers may be inclined to dismiss Almond's odd personal quest as just the indulgent ruminations of a guy with too much time on his hands. But he displays an uncanny knack for drawing parallels between our individual inner hungers and some unexpected universal truths.

Near the end of the book, Almond steps back and takes stock when he writes, "...I didn't know if I could explain what I was really getting at: that candy had been my only dependable succor as a child, that it had, in a sense, saved my life, that I hoped to draw a link between my personal nostalgia and the cultural yearning for a simpler age, but that, in the end, the laws of the candy world were the laws of the broader world: the strong survived, the weak struggled, people sought pleasure to endure their pain."

Steve Almond will likely win scores of new fans with this deliciously addictive memoir. Whether you view candy as a simple snack or a secret weakness, Candyfreak is everything you could crave: at first sweet and pleasing, then complex and surprising -- and ultimately, delightfully satisfying.

Amy Rogers is a founding editor of Novello Festival Press, and author of Hungry for Home: Stories of Food from Across the Carolinas.