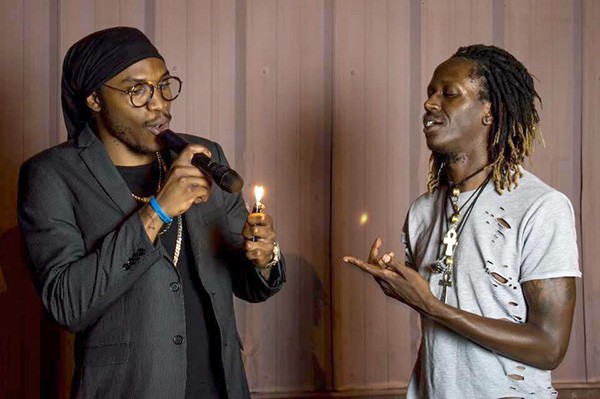 [From left] Kizzy and Tizzy smoke the mic. (Photo by Adam Shutter)

Xavier Walker and DaQuan Bolton, better known by their hip-hop names Tizzy and Kizzy, are pretty much joined at the hips.

The two members of Th3 Higher, one of Charlotte's more promising rap duos, do everything together. Right now, they're sitting together in a small room in a small house just off Eastway Drive that serves as their recording studio and brainstorming lair. The two are animated, talking in great detail about their plans to take their Zen-style rap to the masses.

Surrounded by huge white boards with specific dates and times when certain aspects of their most ambitious album to date, Super Symmetry, will be completed, the room is a glorious mess.

On one white board are lists of collaborators. On another are columns headed "Track Listing," "Where We Going," "Press Box," "Blog Control," "YouTube Popularity" and "Soundcloud Dominance."

Under those headings are detailed plans on how to achieve their goals.

"We know exactly where we're going with this," says Tizzy, 25, who is razor thin with long dangling locks and glasses that give him the look of an intellectual on a mission to transform deep knowledge into ambitious, adventurous hip-hop.

If anybody should know where they're going, it's Tizzy and Kizzy.

The two have known each other since they met in Mr. Weaver's Psychology class at Renaissance School of the Arts at Olympic High. Tizzy was in 11th grade and Kizzy was a senior.

Tizzy was the new kid at school and overheard Kizzy and another student talking about writing raps. Tizzy thought to himself, "Yeah, right."

"Yeah, right" was right. The dudes were good.

The two laugh at the memory.

"Tizzy told us he had a studio and was looking for people to rap with," Kizzy remembers. "We went straight to his house after that and we would record day and night from 2:30 in the afternoon to 2:30 in the morning. We only stopped to eat."

Actually, they haven't stopped in the decade since that fortuitous meeting in psych class. The two have recorded a handful of releases — the 99 Cent EP (2013), Teal and Purple (2014), Trapabolic Time Chamber (2015), and the Seed of Life EP, which drops June 21. (Stay tuned to clclt.com for the SOL EP's premiere right here.)

But nothing has been as ambitious as the upcoming concept album Super Symmetry. You could say it's a sort of Zen and the Art of Hip-Hop.

"This is is the culmination of all the lessons we've learned throughout our career," Tizzy says.

He's standing next to the main white board in the duo's makeshift studio/office space, crammed with equipment and mismatched furniture, pointing to each plan of action on the board. Right now, he's going over the track listing.

"The tape starts off with 'Snakeway,' produced by N.A.P Productions. It's a letter to ourselves. It serves as a mental stake in the ground. As we go from here, we enter uncharted territory where self can be easily lost."

See what I mean? Zen. These dudes are doing nothing short of creating a master plan for living life in the moment; a sort of hip-hop self-help manual, Th3 Higher-style.

"Each song serves as another dimension that we have the ability to tap into," Tizzy goes on. "Our whole career we've been told to pick a sound or genre and stick with that. Screw that. Songs like 'Foot on the Gas,' 'Th3 Myth' and 'Sun at Night,' featuring Matrix P, are just three songs on the 13-track project that showcase not only our ability to change style but also subject matter, tempo, and sound — completely! — and still perform them beautifully and effortlessly."

Did I mention that confidence is not in short supply inside Th3 Higher's lair?

"'Moment' serves as a constant reminder to ourselves as well as our listeners to never take anything for granted and to stay focused on living in the now. The tape closes with 'Super Symmetry.' That song serves as the Ouroboros: we survive because we live and move in love and positivity. Thus when the energy is reciprocated we must only make sure we are ready to receive the blessings that come our way."

This is some heavy stuff, no? Th3 Higher may be Charlotte's most philosophical hip-hop act. They think about — no, actually, they plan, write, conceive and execute — every move they make. And every move involves bringing not just the hip-hop community together, but bringing humanity together into a swirl of spiritual oneness.

It wasn't always like that. Tizzy and Kizzy just liked to rap and make beats in the old days. Oh, they were smart guys with big ideas, but it wasn't until they separated temporarily — Tizzy went off to college to study science at UNC Pembroke and Kizzy stayed back home to study graphic design at Kings College.

"I had my studio with me in my dorm room but I would never use it," Tizzy says of his time at Pembroke. "For some reason it just didn't feel right. I transferred from UNCP to UNCC thinking that I'd do both [music and school] but I was sadly mistaken. So I dropped out of UNCC. I called Kizzy up and was like, 'Yo, we gotta get back to it.' He came to my apartment and — boom — we've been back at it ever since. This was in 2010."

The duo's biggest push came from a woman who is the unofficial mother of underground hip-hop in Charlotte: Ms. Bunny Gregory..

"Ms. Bunny runs and operates the Underground. She called Tizzy one day and asked him to come check out her new house. She had a huuuuggge basement and she gave us permission to turn it out," Kizzy remembers. "We painted all the walls black, put in lights and a stage and started throwing #MFGD (short for Mufucka Gahdamn)."

The Underground, set up in Ms. Bunny's basement, was a sort of a Charlotte underground hip-hop version of Showtime at the Apollo, where crowd acceptance or rejection dictated the day. "It was an open mic where artists were alotted one song," Kizzy continues. "If the crowd liked it, they say 'MUFUCKA GAHDAMN!,' and the artist was able to perform another song. If the crowd didn't like it they'd simply say 'GAHDAMN' and the artist would leave the stage and try again the following week." 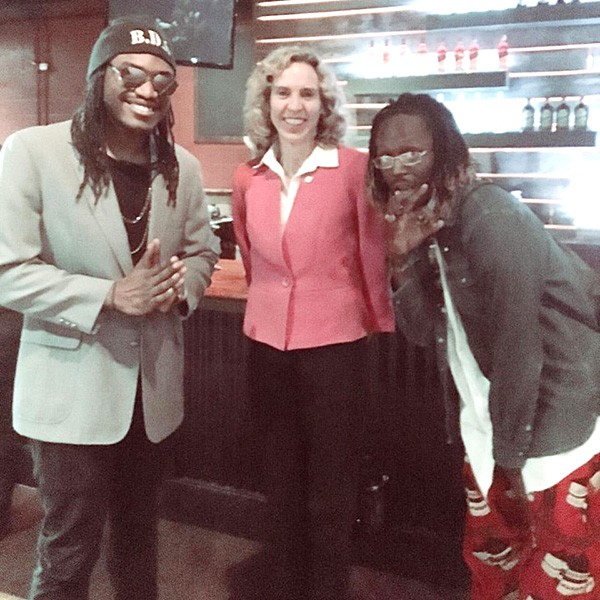 All this happened during a time when the more prominent Charlotte music venues wouldn't give rappers the time of day. A booker would hear the word "rap" and immediately say no. In the white music world, bookers and promotors didn't seem to comprehend that the differences among different genres of rap are about the same as the difference between, say, Justin Beiber, Metallica and the Strokes.

A handful of new and old rock-centric venues have opened their minds somewhat since then, but getting hip-hop booked in Charlotte is still a challenge.

"There are a lot less music venues that book hip-hop," Tizzy says. "We can book bars and taverns but a majority of the bigger venues in Charlotte don't book hip-hop, and we get it, it's based on things other acts did, but it's just shitty when we come to book and get turned away, one-lined or flat-out ignored even after we present professional proposals. Just based on the fact that we're hip-hop."

The Underground was an antidote to that.

"The entire purpose of the Underground was to give artists a stage to not only perform but to hone their skills," Tizzy says. "We'd been performing around Charlotte for a while but we knew there had to be way more people in the city and — BOOM! — we found them." 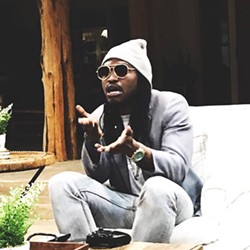 Love. For Th3 Higher, that's what it's all about. The duo's experience with the Underground shifted their focus. They'd always been conscious rappers, but now, with the upcoming Super Symmetry, consciousness is their mission.

"Our current music is focused on shifting the consciousness of our listeners. We're not preaching but we definitely are hitting on vibrations no other artists are hitting on," Tizzy says.

"We believe that we are here to learn and love. We've started to share what we've been learning over the last year. Our newer music is what we like to call Meta. If we're forced to choose a genre we've chosen to create our own. Meta is abstract rap laced with metaphysics and knowledge. We hit all areas from the trap to the boom bap!"

Oh, and one more thing: Don't get it twisted. All the talk of metaphysics, spirituality and academics doesn't mean these guys can't rock a house hard. During the BOOM Fest in April, Th3 Higher had Petra's in Plaza Midwood positively vibrating. Their performance was dynamic, stunning, engaging.

Or, as Kizzy says, "Lit! We get on stage and literally black out and let the music take over. Much of it stems from being looked over on a lot of shows. We book a majority of our own shows because we have only been asked to perform at a handful. Us Southside rappers gotta stick together. So while we're on stage we go as hard as we possibly can. We cannot stand negative energy, so when on stage we feel it our duty to turn up to the max to make sure the audience is entertained and having a good time.

He pauses, adding, "Not to mention Tizzy still wants to stage dive. Can't do that with a dead audience. I mean you can but.. yeah... no."