The Boy Next Door: How J-Lo can she go? | Reviews | Creative Loafing Charlotte
Switch to the mobile version of this page.

The Boy Next Door: How J-Lo can she go? 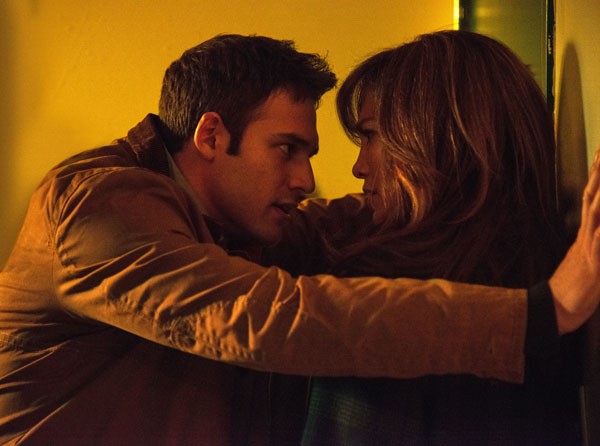 Back in 1944, "The Boy Next Door" was a popular tune sung by Judy Garland in the musical masterpiece Meet Me in St. Louis. Fast forward to 2015, and The Boy Next Door refers to a Jennifer Lopez movie certain to induce groans in St. Louis, St. Ives and anywhere else this hellish drama might pop up.

Reminiscent of the dopey "women in peril" thrillers that blotted the landscape in the years surrounding Y2K — bombs that featured the slumming likes of Angelina Jolie, Halle Berry and Ashley Judd — The Boy Next Door stars Lopez as Claire Peterson, a high school teacher living alone with her teenage son Kevin (Ian Nelson) in the aftermath of learning about her husband Garrett's (John Corbett) infidelity. Garrett admits he made a mistake and wants to reconcile, but Claire remains torn between giving him another chance or signing the divorce papers. So when hunky Noah Sandborn (Ryan Guzman) moves in next door to tend to his ailing grandfather (Jack Wallace), Claire can't help but be distracted by his gentlemanly conduct, Good Samaritan deeds and that absolutely ripped bod. It also doesn't hurt that he's improbably fascinated by Homer's The Iliad, since Claire's about to teach a course devoted to that classic tome (as Jimmy Durante would say, "What a coinkydink!").

Noah is 19 years old, but life circumstances (namely, the deaths of his parents) have led to him still being in high school. The discrepancy is accentuated by the fact that Guzman himself is 27, and while his age-oblivious casting might not match the notorious marquee pairing of 43-year-old Leslie Howard and 34-year-old Norma Shearer as those star-cross'd teenagers Romeo and Juliet, it's still worth a chuckle or two. At any rate, Noah's hot for teacher, and when he makes a pass at her, she responds favorably to his pawing. But the morning after their rapturous lovemaking, Claire realizes she made a mistake; for his part, Noah professes to love her and goes bonkers when she spurns his further advances.

It's at this precise point, when Noah goes from 0 to 60 mph on the psycho scale, that the film hits (with apologies to Mel Brooks) Ludicrous Speed. Noah's on-a-dime transformation is scarcely believable, and any character shadings are immediately stripped in order to turn him into a one-dimensional villain so hissable that one wonders if he also drop-kicks puppies on the side. As for Claire, she's the typical dunderheaded heroine found in thrillers of this low caliber, making so many mistakes in dealing with her stalker that you wonder how she can possibly possess the brainpower to master a light switch, let alone teach Homer to bored teens (maybe she was confusing this Homer with Homer Simpson?). The Boy Next Door is also the sort of daft picture in which a folder of incriminating evidence related to murderous deeds is conveniently named and resting conspicuously on a computer desktop, and where no one apparently has ever heard about this magical realm known as iCloud, where photos can be stored out of reach of home invaders seeking to destroy evidence. And let's not neglect the scene in which Noah presents Claire with a copy of The Iliad, and she chirps, "Oh, it's a first edition!" First edition? As in circa 750 B.C. first edition? Did Homer read excerpts from it at the Aegean Barnes & Noble?

This marks the first produced screenplay for attorney-turned-writer Barbara Curry, so it's too early to make any judgments about her prowess with the pen — maybe she knew that a junky thriller would be the easiest way to break into Hollywood and she'll now start churning out smarter scripts. But at least director Rob Cohen is proving to be consistent: His last two features, 2008's The Mummy: Tomb of the Dragon Emperor and 2012's Alex Cross, both placed on my 10 Worst lists in their respective years, and it's hard to imagine that this turkey won't follow suit. Not to be outdone, Lopez has also shown a similar commitment to cinematic stability. Back in 2002, she starred in the abysmal Enough, another movie in which she's terrorized by a violent brute — albeit a husband rather than a lover (although, as I stated in my review at the time, that movie "ultimately has as much to do with spousal abuse as The Wizard of Oz does with agriculture in Kansas"). Perhaps The Boy Next Door should have been written as a sequel to Enough; that way, it could have arrived with the critic-friendly title Enough Already.

The Boy Next Door is not showing in any theaters in the area.