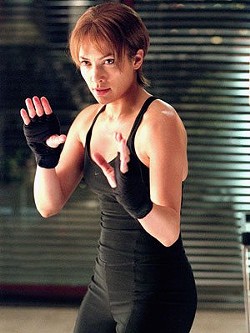 It's rare enough when one director has two movies opening in the same year, but in the same week? That's the present situation in Charlotte, as last Friday saw the local releases of both Enigma, already playing in limited release around the country, and Enough (* out of four stars), opening nationally.

This side-by-side release allows us to study the case of Michael Apted, on balance one of our most reliable directors. He spends most of his time filming documentaries (Incident at Oglala, the Seven Up series) and thoughtful studio pictures (Coal Miner's Daughter, Gorillas in the Mist), yet occasionally he'll slip up and helm something as daft as the James Bond flick The World Is Not Enough. (In case you've lost track, that's the one in which Denise Richards, as Christmas Jones, breathlessly exclaims, "I'm a nuclear scientist!" while poured into short-shorts no self-respecting brainiac would be caught dead in.)

Enigma is the sort of intelligent, character-driven piece we'd expect from Apted (see Film Clips for a review), but Enough easily emerges as the new nadir of his long career. A sleazy exploitation flick disguised as a serious message movie about a nutcase who beats his wife, this ultimately has as much to do with spousal abuse as The Wizard of Oz does with agriculture in Kansas.

It's easy to see how every generation might want its own cinematic rendering of, say, Little Women, but do we need a Sleeping With the Enemy every decade or so? As long as they're worthy, no problem, but even more than the so-so Enemy (which at least benefited from Julia Roberts' bloom as the Next Big Thing), Enough completely screws up a premise that cries out for a serious celluloid treatment. But Apted and screenwriter Nicholas Kazan (who penned Reversal of Fortune in another lifetime) aren't interested in exploring such an explosive topic as wife-beating; they're more interested in dolling up star Jennifer Lopez and letting her kick ass in an obvious finale that can be predicted even by those who haven't seen the tell-all trailer.

Lopez plays Slim, a smart, sensible waitress who meets and marries Mitch (Billy Campbell), seemingly the perfect man. For the first few years of their marriage, he's charming, attentive, romantic, and a good father to their young daughter Gracie (Tessa Allen, cast not so much for her acting ability as for the fact that she draws a collective "aww" from the audience every time the camera zooms in on her tear-streaked little face). But in about the time it takes to clip one half of one fingernail, Mitch turns into a complete monster, an ogre who has affairs with seemingly every woman on the continent, beats his wife to a bloody pulp, and even gets rough with his helpless daughter.

The fact that Mitch excuses his beastly behavior by declaring that he's simply doing what a man's gotta do is offensive enough, but don't think this wanna-be feminist empowerment fantasy goes easy on the women, either. Thousands of wives in this country are trapped in abusive marriages because they don't have the funds to escape or fight back, but hey, that's no problem in this movie, not when Slim manages to track down her estranged father (Fred Ward), a boisterous lout who's so rich he can personally bankroll his long-lost daughter's entire revenge plot, right down to buying her a new house, paying for her martial arts lessons, and allowing her to wear plenty of lip gloss around the clock (apparently, Slim wears the same makeup application over the course of several months, since her face shines in the same manner regardless of whether she's hitting the gym, hitting the sack, or hitting Mitch in the film's over-the-top action finale).

It would take too much space and effort to list the countless plot holes littering the movie, but this is the sort of inane flick in which our heroine plans ahead of time for situations that she couldn't possibly know will happen later -- but of course they do, and of course she's able to then wiggle her way out of them.

But perhaps the most ludicrous aspect of a most ludicrous movie is the decision to break up the action with, of all things, cutesy title cards, as if this were some frothy Meg Ryan romantic comedy. We go from "How They Met" to "More Than Enough" -- I have to assume I was rubbing my eyes when they flashed the one that read "Boy, This Movie Really Blows, Doesn't It?"