The dirt on Yard Art Day

Out front for the DNC and beyond 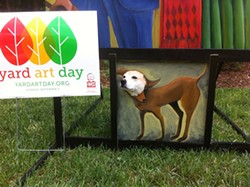 The politically charged guests visiting Charlotte for the Democratic National Convention can poke the noses of their rented cars outside the Central Nervous Center downtown to discover the NoDa Brewing Company, Phat Burrito, Lang Van and hundreds more small-world charms beyond the glitter and pomp of tittering political theater. Along the way, the lucky will wander through our neighborhoods and spy the soul of Charlotte turned inside out — Yard Art, just beyond curbside.

Sept. 3 is Yard Art Day in the Queen City. More than 200 citizens — teachers, massage therapists, nurses, dental technicians, insurance salesmen and ... perhaps ... dare we dream? ... bankers — will unfurl their freak flags in their front yards for all the world to see. Underground Charlotte speaks.

Yard Art Day is the brainchild of photographer Deborah Triplett. Her project was spawned on Facebook; the idea captured eyes and hit a spot in the hearts and minds of artists, wannabe artists and avowed non-artists across town. Many a Facebook friend came a-calling — 1,500 at last count — and many contributed bits and pieces of cash to support the effort. Checks came in from Common Market and other businesses in boho neighborhoods like Plaza Midwood and NoDa. Triplett was grateful for that.

Carrie Gault, a member of the Quasimodo Project — a confederacy of creative-class citizens bent on showing Charlotte's artistic pulse — noticed the enthusiastic response. Gault asked Triplett if Yard Art Day might become a part of her group's efforts to bring attention to the city's seldom-seen creative stripe. A good fit. Neither the Quasimodo clan nor Triplett thinks of Charlotte as merely steel and glass, fund managers and money. They don't believe Charlotte is just for the 1 percent. Not even during the DNC.

Triplett imagines — hopes for — a change in perceptions of Charlotte. "Not only for the people who don't live here, but for the citizens as well," she says.

"A lot of the works I've seen so far vary," says Greggory Bradford, who's both an organizer and a participant. "Some are found-object sculptures. One participant has made a large sculpture from salvaged foam he got from a lake pier. Others are more traditional. Mine is from cardboard, like many people who had a more 'green' idea for their works."

Triplett and her team have launched a website with information on everything from how to join in to where to find the participating homes. If you're visiting for the DNC, check out those neighborhoods. If you're a local, start in your own neighborhood and then venture out from there. But if you do plan to drive through the higher density yard art areas, drive slowly and carefully; remember, you will be rubbernecking.

"Given the scope of the exhibition, I would say driving is a necessity," confirms Bradford. "Even with a big concentration being in NoDa and Plaza Midwood, the spaces between are too great for just walking."

While Triplett hopes Yard Art Day will attract DNC visitors, she also expects the art will linger long after the convention is over. "It was not created for the DNC. It was created for Charlotte," she says. "Many will leave the art in their yards permanently, and for some, it will only be up for that 24-hour period. My original intent was that this be a 24-hour art citywide flash mob."

Triplett's plans are for Yard Art Day to become an annual Labor Day event. "It will just be great to have one day where you can be expressive, where you don't have to care what anyone else thinks."

(For more information on Yard Art Day, go to www.yardartday.org.)