The Five-Year Engagement: Engaging but overlong | Reviews | Creative Loafing Charlotte
Switch to the mobile version of this page.

The Five-Year Engagement: Engaging but overlong


It would be both obnoxious and inaccurate to quip that The Five-Year Engagement feels as if it runs as long as the titular length, but there's no denying that this is one movie that would have benefitted from some judicious trimming in the editing room. 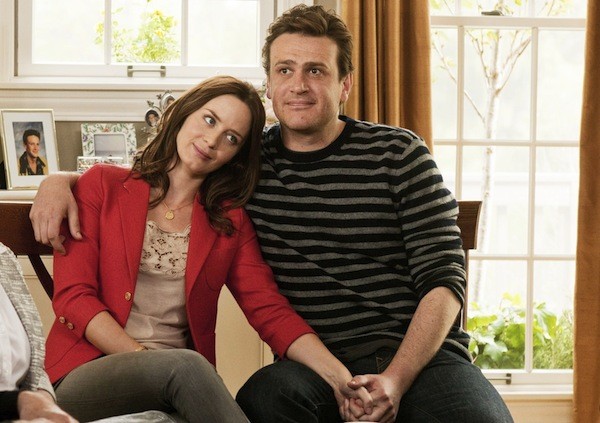 At 125 minutes, the latest comedy from the director (Nicholas Stoller), star (Jason Segel) and producer (who else but Judd Apatow) of the superior Forgetting Sarah Marshall doesn't sound especially long — after all, it's the exact same running time as the Apatow-produced Bridesmaids, which wore its length beautifully. Yet by unleashing most of its best gags during the first act, and by sprinkling its dramatic moments around like a sous chef adding just a soupçon of parsley to an order of grilled trout, that leaves plenty of time for the film to develop a noticeable sag around the middle.

Speaking of sous chefs, that's the role essayed by Segel in this picture: He plays Tom Solomon, a highly respected member of San Francisco's culinary scene. His girlfriend is Violet Barnes (Emily Blunt), and it's only after he pops the question and they're planning their nuptials that Violet is beckoned to the University of Michigan for a postdoctoral position. Deciding to put his own career on hold while she builds hers, Tom agrees with Violet that they should postpone the wedding for two years and move to Ann Arbor. Tom, who can only find work at a deli, hates living there, and when it looks like the two years might stretch into something longer, he loses it in rather imaginative fashion.

The late film critic Pauline Kael famously said of the popular Fred Astaire-Ginger Rogers pairing, "He gave her class and she gave him sex." In this film, Blunt provides both the class and the sex, but Segel nevertheless brings enough easygoing charisma and sly wit to the table to make them a believable screen couple. While this is evident in the scenes in which they make doe eyes at each other, it's crucially also identifiable in the sequences in which their characters are at odds with each other. There's a terrific bit in which the two argue in bed, replete with the sort of acidic asides, frustrated exchanges and oddly understandable oxymorons ("I want to be alone ... with you here!" — a great line) that spring from real life. Scenes like this make the lowbrow moments even more unworthy of inclusion here, whether it's the sight of Violet getting walloped by an opening car door or the increasingly tedious banter between Violet's colleagues at the university.

This isn't to suggest that all the comedic material fails (it would be a pretty sorry romcom if that were the case). Two TV stars, Parks and Recreation's Chris Pratt and Community's Alison Brie, brighten two rather commonplace characters (the vulgar best friend and the snappy sister, respectively), and Tom's frightful facial hair during the film's midsection is almost worth the admission price alone. If they had kept all the drama and halved the humor, The Five-Year Engagement would have truly distinguished itself. As it stands, it's engaging but hardly revelatory.