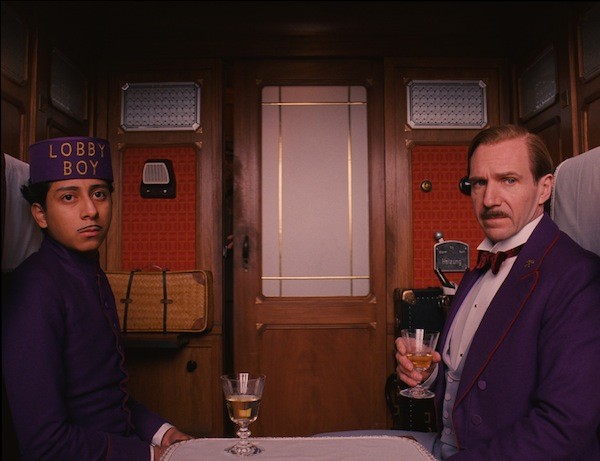 It would be insulting and inaccurate to state that Wes Anderson is the Zeppo Marx to the Coens' Groucho and Chico (or Groucho and Harpo, if you will), but as both sets of filmmakers have often leaned heavily on stylized dialogue, eye-popping tableaus and no small measure of eccentricity in both the storytelling and characterization departments, there have often been comparisons that have left the solo artist standing in the shadows of the sibling team. Because, for all his obvious talent, I've always found Anderson's movies easier to admire than truly enjoy, kept at arm's length by a coolly distant sensibility that didn't always translate to film. But with 2012's Moonrise Kingdom, Anderson finally broke through his own remoteness, and now with The Grand Budapest Hotel, he has ascended even further with what turns out to be the best film of his career.

Working with co-writer Hugo Guinness, Anderson has concocted a fanciful tale marinated in whimsy and tinged with ruefulness. After a pair of framing devices, the film takes us to the 1960s, where an author (Jude Law) spends most of his time in a crumbling, practically empty hotel located in the fictional Republic of Zubrowka. There, he meets owner Zero Moustafa (F. Murray Abraham), who proceeds to tell him a story that takes us even further back in time. The setting is now the hotel during the early 1930s, when young Zero (Tony Revolori) is serving as a lobby boy under the tutelage of M. Gustave (Ralph Fiennes), the property's ab-fab concierge. Gustave is superb at his job, which on the downside includes bedding the elderly — and wealthy — women who stay at the facility. One such individual is Madame D. (played by an unrecognizable Tilda Swinton in layers of wrinkled makeup), and when she passes away under mysterious circumstances, she wills an invaluable painting to Gustave. This displeases her son Dmitri (Adrien Brody) to such a degree that he frames Gustave as his mother's murderer and sics the family henchman, the snarling Jopling (a frightening/comical Willem Dafoe, replete with pointy teeth), to bump off anyone who interferes with his diabolical plot. Thus, it's largely up to Zero, with the aid of his girlfriend Agatha (Saoirse Ronan), to save his mentor and the day.

Several of Anderson's past films, works such as The Life Aquatic with Steve Zissou and Fantastic Mr. Fox, have showcased unique visual compositions, and with its generous use of models and matte backdrops, The Grand Budapest Hotel follows suit. The playful art direction is matched by the jocularity of the screenplay, which mines ample humor from the relationship between Gustave and Zero. Fiennes and Revolori prove to be a choice tag team, but they also shine individually, with Revolori making the most of his character's whispery demeanor and Fiennes sensational as the concierge whose occasional buffoonishness can't mask the tortured soul of a poet. Indeed, Gustave functions as the film's conductive circuit, subtly discharging a melancholy air that informs a rose-colored fantasy that's nevertheless very aware of the impending war soon to crush Europe. The Grand Budapest Hotel is Anderson's best film not just because it makes us laugh, but because it makes us care.