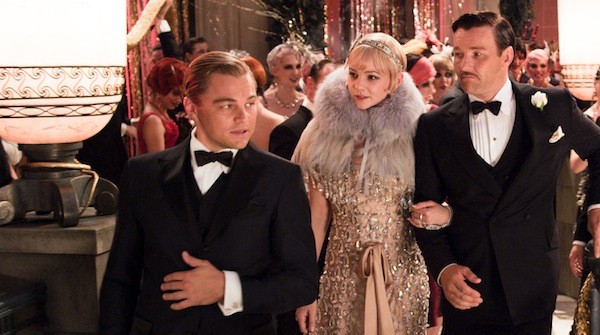 One of the Ten Commandments of movie reviewing, at least in The Gospel According to Matthew Brunson, is that "Thou shalt not compare the film adaptation with its source material." As completely separate art forms, it's a ludicrous exercise, and the only possible exception should be when the big-screen treatment perverts the original text to a grotesque degree (e.g., the infamous Demi Moore version of The Scarlet Letter).

Here's the thing about director Baz Luhrmann's The Great Gatsby, the fifth adaptation of F. Scott Fitzgerald's 1925 masterpiece: It actually remains quite faithful to the book, at least in terms of plot developments, character motivations and other integral elements often butchered by Hollywood filmmakers. But it rarely taps into the essence of the novel, preferring instead to continuously showcase the glitz over the grit. It's a stage spectacular made for impatient moviegoers, and yet there's no denying that it works fairly well in that capacity. So if I were to rate this in comparison to the novel, it would merit a flat 2 stars. But as its own entity — and to avoid being tagged a hypocrite — that rating gets bumped up a half-star.

Like the novel, this Gatsby is set on Long Island in 1922, as the affable Nick Carraway (Tobey Maguire) moves into a cottage situated next to the sprawling mansion of Jay Gatsby (Leonardo DiCaprio), a nouveau riche entrepreneur known far and wide for his lavish parties (the sort that end with a fireworks display). Across the way lives Nick's cousin, Daisy Buchanan (Carey Mulligan), and her loutish husband Tom (Joel Edgerton), who's been having an affair with the wife (Isla Fisher) of his dirt-poor mechanic (Jason Clarke). Gatsby and Daisy once shared a grand but brief romance, and the millionaire has been pining away ever since. Becoming fast friends with Nick, Gatsby convinces him to help facilitate a rendezvous between the pair, a clandestine plan until Tom starts to get suspicious.

Fitzgerald's novel touches on numerous weighty subjects, including the allure and the insidiousness of decadent living, the opportunity for Americans to reinvent themselves in startling fashion, the perennial class struggle between this nation's haves and have-nots, and the subtle but significant differences between "old money" and "new money." Luhrmann, who co-wrote the script with his frequent collaborator Craig Pearce, pays lip service to all of these topics but resists delving into them, opting instead to fashion a film that plays like a fabulous party that only goes downhill when the cops turn up to shut it down. Luhrmann's modus operandi is generally to add a modern layer to stories set in other periods (Moulin Rouge, Romeo + Juliet), but this is the first time when his additions feel intrusive rather than innovative, calculated rather than clever. For example, did he opt for a contemporary soundtrack packed with Jay-Z tunes for any artistic reason or simply because he knew it would likely yield a bestselling soundtrack?

Of the previous screen versions, I've only seen the 1974 adaptation (now out on Blu-ray and reviewed here); there are no existing copies of the silent 1926 film, the 1949 take (starring Alan Ladd) is generally difficult to track down, and I've never made time for the 2000 TV-movie. While not a complete success, that '74 model trumps this one in almost every regard, particularly in the casting. DiCaprio is arguably a better actor than Redford, but he doesn't have the stature to quite pull off this iconic role. Maguire's Nick Carraway doesn't differ enough from his Peter Parker, meaning I prefer Sam Waterston's thoughtful portrayal. As Myrtle Wilson, the mechanic's wife, Karen Black made her tragic dimensions palpable, whereas Fisher in this edition makes the character feel like an afterthought. Faring best among this new lot is Edgerton as Tom — he's deliciously duplicitous and seedy — but few can top Bruce Dern in playing this sort of role. The only casting misstep in the earlier version comes in the form of Mia Farrow's grotesque turn as Daisy Buchanan: Mulligan isn't nearly as disastrous, but she's still all wrong for the part, portraying this beautiful whirlwind as a mousy girl — it's like watching a 12-year-old playing dress-up in her mommy's clothes. In fact, much of The Great Gatsby feels that way: It's pretty, charming and sometimes even clever, but it's impossible to take seriously.