The Wolf of Wall Street indulges in overkill | Reviews | Creative Loafing Charlotte
Switch to the mobile version of this page.

The Wolf of Wall Street indulges in overkill 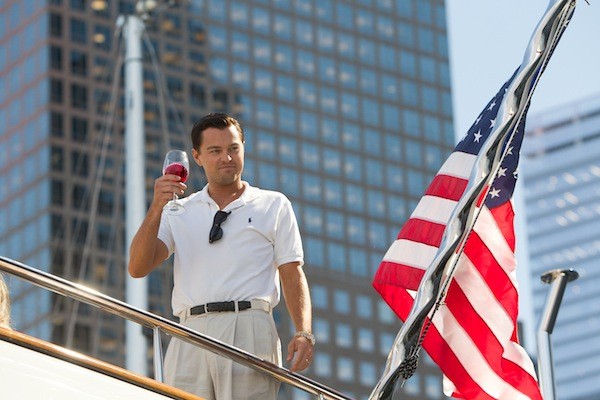 While David O. Russell is managing to out-Scorsese Scorsese with American Hustle, the real Martin Scorsese isn't taking the movie season off; instead, he's back with The Wolf of Wall Street, an adaptation (by Terence Winter) of Jordan Belfort's memoirs about his success during the 1990s as a crooked stockbroker whose wealth was matched only by his hubris.

While this is the weakest of the five collaborations between Scorsese and his star player Leonardo DiCaprio, that's not putting any of the blame on the actor's shoulders. He's sensational as Belfort, who rises from an eager Wall Street newcomer to a whiz kid great at the shady sale to a millionaire whose bad habits and bad deeds mean he's primed for a fall. Like American Hustle (as well as many other 2013 titles, including DiCaprio's The Great Gatsby), the film is a look at American success and excess, a tale of unchecked consumerism and capitalism, but it feels like it's late to the party. Its Wall Street setting makes it more familiar than other recent films in this vein, and there's little here that expands on corporate raider Gordon Gekko's mantra (in Oliver Stone's 1987 Wall Street) that "Greed ... is good." Creatively, it's a step back for Scorsese: Replace the violence in his gangster flicks with the copious nudity here, and it doesn't feel like the needle's moved much.

Yet because it's a work from this master moviemaker, it looks great, and it features a few powerhouse scenes. Mostly, though, it's showcases some terrific acting. On the heels of his impeccable work in Mud and Dallas Buyers Club, Matthew McConaughey hits a homer in his brief appearance as Belfort's mentor, who insists that booze, drugs and frequent masturbation are the chief requisites for a successful career on Wall Street. As Belfort's best friend and, alternately, worst nightmare, Jonah Hill basically plays the standard Jonah Hill character, albeit in a larger-than-life manner — strangely, it works. As one of the few female characters in this testosterone zone, rising Australian actress Margot Robbie holds her own as Belfort's quickly disillusioned wife, and there's a nice nibble of a role for Absolutely Fabulous star Joanna Lumley as her aunt. The only actor who fails to make much of an impression is Jean Dujardin, who won the Best Actor Oscar a couple of years ago for The Artist. Stripped of his voice, he carried that silent film with his charm; here, he gets to deliver dialogue as a Swiss bank manager, but it's a colorless role, and he's drowned out by all the cacophony in this ambitious but overbaked movie.