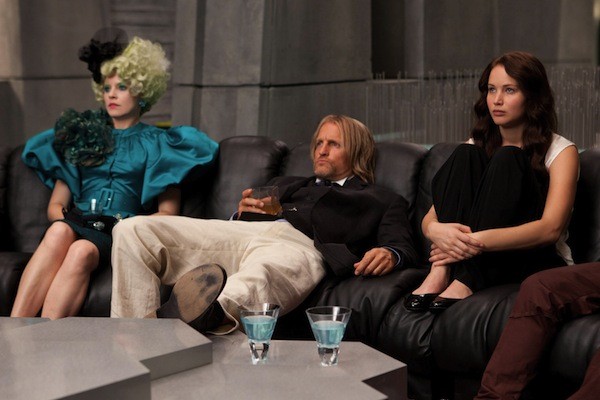 So, read any good books lately?

As anyone with even the faintest trace of a pulse has heard, The Hunger Games, the eagerly awaited adaptation of Suzanne Collins' smash bestseller, has finally hit theaters, and even though I'm not Catholic, let me pull up a confessional booth and admit that I'm one of the few sentient beings in this country not to have read the novel. Unlike copious critics who wolf down a book in order to offer a blow-by-blow comparison between text and screen (almost always a losing proposition for the cinematic side), I believe in letting movies stand on their own. And when viewed through this prism at least, The Hunger Games largely delivers on both its provocative premise and its exciting execution.

Set in a future world where the ruling 1 percent long ago squashed a rebellion by the 99 percent, the law dictates that, as perpetual punishment, those once-radical districts — 12 total — must annually send both a boy and a girl, randomly chosen from a pool of 12-to-18-year-olds, to participate in the Hunger Games, a televised ritual in which all 24 contestants are set loose in the outdoors and must kill each other until only one remains. The representatives for District 12, the most impoverished of the outer regions, turn out to be the headstrong Katniss Everdeen (Jennifer Lawrence), who volunteered once her little sister's name was drawn, and the meek Peeta Mellark (Josh Hutcherson), who's convinced that he'll be killed long before the end.

The lengthy first act is compelling, anchored by the strong central performance of Lawrence (whose similar role in Winter's Bone must have served as her audition tape for this endeavor) and reveling in the introduction of such memorable characters as Caesar Flickman (Stanley Tucci), the unctuous TV host and broadcaster, President Snow (Donald Sutherland), the calculating ruler who hates the working class with the passion of a Republican presidential nominee, and, providing some grizzled heart and off-the-cuff humor, Haymitch Abernathy (Woody Harrelson), whose status as the only District 12 representative to ever win a tournament allows him to serve as the boozy mentor to Katniss and Peeta.

Director Gary Ross, who co-wrote the script with Billy Ray and Collins herself, has a minimalist style that enhanced dialogue-dependent and character-driven efforts like Seabiscuit and Pleasantville, and it's precisely why the first half works so well — and why the second half needed a stronger presence behind the camera. As the kids scatter into the woods and the picture ratchets up the action, Ross can't quite keep up. That's not to say the outdoor scenes ever lack for drama, but a filmmaker with a better feel for kinetic energy — say, Steven Spielberg or even Gore Verbinski — could have turned the winner-takes-all competition into a breathless roller coaster ride. As it stands, the film peters out toward the end, due in large part to a rather anemic duel-to-the-death and in small part to some shoddy visual effects. (In fact, surprisingly lackluster FX work plagues the entire production; for example, the flames emanating from Katniss and Peeta's much-lauded fire suits are laughably unconvincing).

Still, the relatively few drawbacks are no match for the many strengths — the latter column includes the contributions of Clint Eastwood's regular cinematographer Tom Stern, who captures both the majesty and the mystery of the North Carolina landscape. If the N.C. Film Office ever needs someone to shoot more promotional videos targeting either potential tourists or potential Tinseltown investors, Stern's their man.