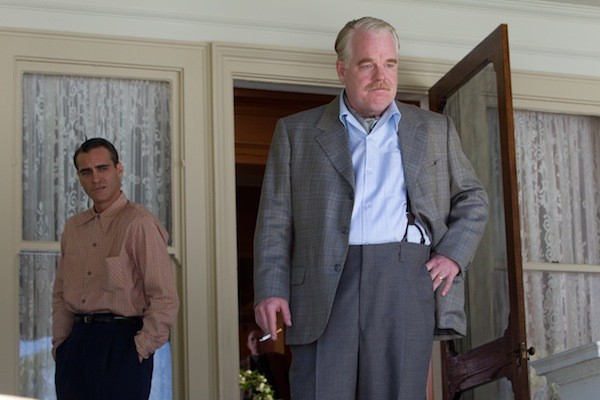 There's a great scene in Milos Forman's 1984 Oscar winner Amadeus when Mozart (Tom Hulce) tries to convince Emperor Joseph II (Jeffrey Jones) to allow him to stage a particular opera. Replies the Emperor, "You are passionate ... but you do not persuade."

That snatch of dialogue might as well be a mini-review for Paul Thomas Anderson's The Master, the latest from the writer-director of There Will Be Blood and the instant masterpiece Boogie Nights. The Master features passionate performances from its stars, Joaquin Phoenix and Philip Seymour Hoffman. It's obviously a work of passion for its creator, who stages it with his typical flair and inventiveness. And yet it never quite persuades us to believe in its convictions, its viewpoints, even its sense of purpose.

Phoenix essays the role of Freddie Quell, a World War II vet who returns to the world in a shell-shocked condition. An often temperamental man, he soon becomes a disciple of sorts to Lancaster Dodd (Hoffman), the founder of a religion known as The Cause. No one, not even Dodd's wife Peggy (Amy Adams), can understand why such a cultured gentleman like Lancaster would hang around an uncouth thug like Freddie. But it's a relationship that works in spurts — and that pretty much describes the film itself.

Although Lancaster Dodd and The Cause are clearly based on L. Ron Hubbard and Scientology, the movie approaches the religion from such a safe, soft distance that it's hard to get a proper slant on either its inner workings or outer appeal. This problem would perhaps have been alleviated by making Lancaster Dodd, the picture's most interesting character, the protagonist, but this is clearly Freddie's story, thereby keeping audiences at an unfortunate distance.

The Master contains some genuinely powerful scenes and probably warrants a second viewing, but for the most part, even true believers of Paul Thomas Anderson might lose some of their faith after kneeling before this heavily hyped, but curiously airless, endeavor.

The Master is not showing in any theaters in the area.