Her: Computer blue | Reviews | Creative Loafing Charlotte
Switch to the mobile version of this page. 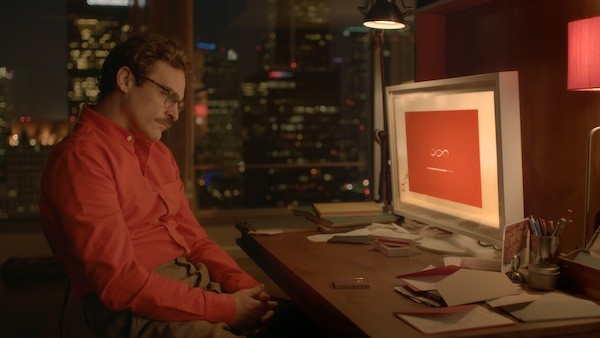 It's sometime in the near future, and Theodore Twombly (Joaquin Phoenix) is a lonely man. A once-glorious marriage has disintegrated to the point that his wife (Rooney Mara) keeps pushing him to sign the divorce papers, phone sex (a voice bit by Kristen Wiig as "SexyKitten") is unsatisfying, and his neighbor Amy (Amy Adams) is purely a platonic friend (besides, she has a tool of a husband). It also appears that he doesn't have a single friend in the entire world. So when a new computer operating system programmed to meet all user needs hits the market, he quickly purchases one. Soon, he's bonding with his OS, who has given herself the name of Samantha (voiced by Scarlett Johansson), and they rapidly become best friends, work colleagues and even lovers.

That, in a nutshell, is the plot of Her, the new film from writer-director Spike Jonze (best known as the helmer of Adaptation. and Being John Malkovich). It's clearly a film of the moment, where it seems like most everyone in this country has an HD TV, an iPod, an iPhone, an Xbox, a PlayStation, and on and on and on. Jonze astutely taps into this national zeitgeist where people are wondering what will come next in our technological evolution. He makes the logical leap for them, imagining a world in which folks will find some way to get close and personal with their computers (no, silly, free online porn doesn't count).

Her might not be a complete original — Lars and the Real Girl, Electric Dreams and even Simone spring to mind — but it does make its futureworld setting uniquely its own. Still, the film contains enough niggling details to prevent me from jumping on the Best of 2013 bandwagon (and a second viewing didn't elevate it). As played by Phoenix (in full mumble mode), Theodore Twombly never feels like a man who was once capable of being madly, passionately in love (as he was with his soon-to-be-ex), and the fact that he has no friends (a co-worker played by Chris Pratt finally fills that slot, but that's well into the movie) suggests that he was never well-adjusted in the first place. (A blind date played by Olivia Wilde tells him he's creepy, to which he replies that he's not; well, yeah, maybe, at least in the hands of Phoenix.) And for a film that's ostensibly about the need to make meaningful connections, it's a rather chilly endeavor, with the only warmth provided by, yes, the computer voice (Johansson delivers the movie's best performance, despite being only heard and not seen).

Still, Her pushes some interesting notions and sports some lovely dialogue (I especially liked Theodore's speech about how all future feelings will just be smaller versions of ones he already experienced), and there are some stellar shots that further illuminate the versatility of cinematographer Hoyte Van Hoytema (whose work here scarcely brings to mind his d.p. duties on Tinker Tailor Soldier Spy or Let the Right One In). Perhaps the film just needed one more rewrite — or would that be reboot? — to make it perfect instead of perfectly fine.

Her is not showing in any theaters in the area.