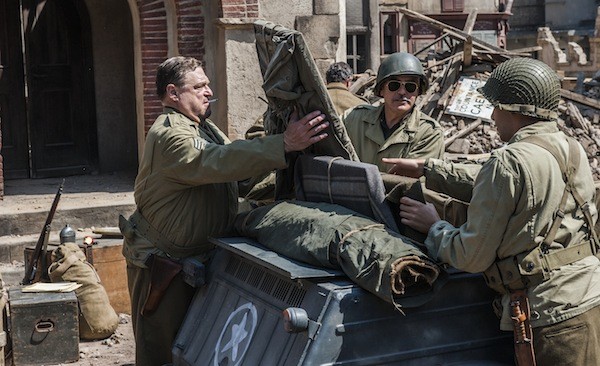 It's a question that's been posed in one way or another through the ages, but let's co-opt the variation employed in Woody Allen's Bullets Over Broadway. Chewing over weighty matters, Sheldon Flender (Rob Reiner) asks fellow playwright David Shayne (John Cusack), "Let's say there was a burning building and you could rush in and you could save only one thing: either the last known copy of Shakespeare's plays or some anonymous human being. What would you do?"

That query is the tickle at the back of the throat throughout The Monuments Men, a true-life World War II tale that was captured in book form by Robert M. Edsel and Bret Witter. That novel, titled The Monuments Men: Allied Heroes, Nazi Thieves and the Greatest Treasure Hunt in History, served as the source for this film version from writer-director-producer-star George Clooney and his frequent collaborator, writer-producer Grant Heslov. It's the sort of picture for which no expense was spared, given its high production values and its A-list cast. It's also the sort of picture that one wishes were better, as the number of missed opportunities seemingly equals the number of unexploded landmines at the war's close.

It's deep into the war, and art preservationist Frank Stokes (Clooney) is being given the go-ahead by FDR (no, not Hyde Park on Hudson's Bill Murray, though he's in here somewhere) to assemble a group of men with the purpose of hightailing it to Europe, where they'll try to locate and take back the thousands of paintings and statues that the Nazis had stolen during their tear through various countries. The classic works have been earmarked for inclusion in the Führer Museum being planned by Hitler; the more modern ones (like those by a fellow named Picasso) are being destroyed. Clearly, it's a daunting assignment, so Stokes recruits the best that the U.S. art world has to offer: museum curator James Granger (Matt Damon), architect Richard Campbell (there's Bill Murray!), sculptor Walter Garfield (John Goodman) and art historian (and ballet director) Preston Savitz (Bob Balaban). He completes the group with two overseas allies, the charismatic Frenchman Jean Claude Clermont (Jean Dujardin) and the boozing Englishman Donald Jeffries (Huge Bonneville), as well as Private Sam Epstein (Dimitri Leonidas), a Jewish kid from New Jersey whose family had managed to escape from Germany just in time.

After the team has been assembled and put through the most minimal of basic training, the film largely turns episodic, with the members scattered to carry out various assignments. Granger heads to Paris to gather valuable intel from Claire Simone (Cate Blanchett), a museum curator whose position allowed her to note all Nazi activities related to art. Garfield and Clermont are paired up and make a lovely couple; Campbell and Savitz are tag-teamed and make a cantankerous one. And Stokes orchestrates all the proceedings, eventually worrying not only about the Germans but also the Russians, who plan to keep all discovered artwork for themselves (unlike the Americans and Brits, who plan to return it to the rightful owners).

The Monuments Men serves up a terrific premise for a movie, although buffs will recall at least two previous efforts with the same subject: the 2006 documentary The Rape of Europa, with its Monuments Men-friendly tagline of "Imagine the World Without Our Masterpieces," and John Frankenheimer's 1964 The Train, starring Burt Lancaster as a French Resistance operative attempting to stop the Nazis from absconding with prized works of art. Even the idea of aging idealists carrying out a dangerous mission during WWII isn't new; for starters, check out 1980's fact-based The Sea Wolves, with 64-year-old Gregory Peck, 70-year-old David Niven and — the baby of the group — 53-year-old Roger Moore as former British officers tasked with destroying German ships located in a neutral zone. Yet with war movies a rare commodity these days (just like Westerns and musicals), it's usually a pleasure when a new one appears on the horizon, and this particular picture has enough going for it to deserve a look. Particularly, the manner in which it mulls over the aforementioned notion of Art vs. Life gives it some degree of heft. Stokes argues that preserving art is preserving history itself — as such, it must not be callously destroyed (I winced at this part, recalling the scene in the documentary No End in Sight when Iraqi civilians wept after Bush bombed their museum and library, historical landmarks containing artifacts from over 1,000 years ago), and even his own men would think their lives were worth the risk. But the other side has its say as well — an officer angrily tells Stokes that he's not prepared to write a letter to a mother stating that her son died so a church tower could be saved — and it's difficult not to continue to reflect on this issue well after the film has ended.

It's just too bad that all aspects of the movie aren't as worthy of such contemplation. The characterizations are a joke, with practically every character assigned one trait or quirk to differentiate him from the rest. Damon's Granger is constantly mocked for his atrocious French (admittedly, an amusing running gag); Dujardin's Clermont smiles and smokes with the dapper grace of a bon vivant; Goodman's Garfield is a jovial giant, not unlike Gilligan's Island's Skipper (I kept expecting him to call Clermont his "little buddy"); and so on. When characters die, it's hard to get emotional because we know next to nothing about them.

The Monuments Men was originally slated for a prime December 2013 release, right in the thick of Oscar season, but Clooney asked for an early 2014 date because the film wasn't ready. One source states that the effects work needed to be completed; another mentions it was because Clooney was still trying to find the proper tone between the drama and the humor. Regardless of the reason, I'm fine with the results following either assumption. All technical attributes (including the minimal effects) are top-notch, and the balance between the serious and the comical strikes me as OK. What does bother me is that much of the humor is barely worth a wan smile (many quips sound like outtakes from a wheezy vaudeville act) and the drama rarely reaches a boil, preferring instead to remain lukewarm (a climactic The Russians Are Coming! The Russians Are Coming! segment proves to be especially feeble).

I appreciate Clooney shining light on this historical footnote, and the movie is accomplished enough to inspire viewers to further examine the real story. But with its shallow characters and hopscotching narrative, The Monuments Men frequently recalls the board game Risk, as both feature largely indistinguishable tokens making their way across a war-torn surface that's noticeably flat.