The Oscar Nominations: Swimming Into Focus | Features | Creative Loafing Charlotte
Switch to the mobile version of this page.

The Oscar Nominations: Swimming Into Focus

With the 90th Academy Awards ceremony set to unfurl on March 4, it’s time to ask the hard questions. Does The Shape of Water represent the shape of things to come? Will Three Billboards Outside Ebbing, Missouri get its message across? Will Phantom Thread play it close to the vest, or will it unravel at the last minute? Or does Winston Churchill pose a double threat thanks to Darkest Hour and Dunkirk?

These are all viable questions, as the five aforementioned films racked up the most Oscar nominations from the 2017 cinematic crop. Here, then, is a look at various highlights, low points, and that stuff that falls in between.

(For sidebars on the year’s best movies as chosen by Academy members, film critics and moviegoers, head to the bottom of the article.)

• The Best Director nomination for Jordan Peele. Get Out was one of the best films of 2017, but since it primarily resides in the horror genre – a designation largely frowned upon by the Academy – it would seem to be an also-ran in the awards race. But its critical raves, its potent box office and, most importantly, its sociopolitical import (did any 2017 release tap into the zeitgeist more stirringly?) kept it in the conversation all year long. The Academy responded positively, handing it nominations for Best Picture (co-produced by Peele), Director (Peele), Original Screenplay (Peele) and Actor (Daniel Kaluuya). Peele’s director bid is especially significant – it marks only the fifth time that a black filmmaker has been nominated in this category. The others: John Singleton, Lee Daniels, Steve McQueen and Barry Jenkins (none have won).

• The Best Director nomination for Greta Gerwig. Second verse, same as the first. Like Get Out, Lady Bird was one of the year’s finest achievements, and it likewise scored a handful of major nods: Best Picture, Director (Gerwig), Original Screenplay (Gerwig), Actress (Saoirse Ronan) and Supporting Actress (Laurie Metcalf). Gerwig’s director bid is especially significant – it marks only the fifth time that a female filmmaker has been nominated in this category. The others: Lina Wertmüller, Jane Campion, Sofia Coppola and Kathryn Bigelow (only Bigelow won). 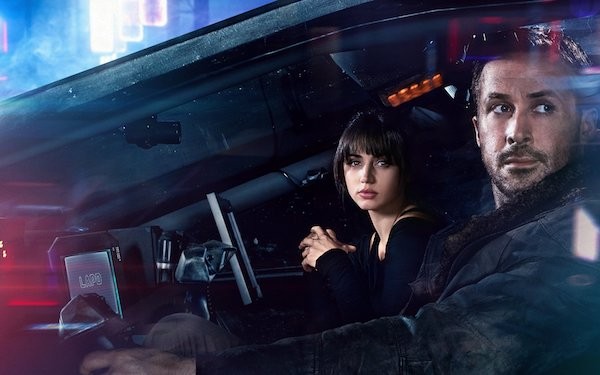 • The five nominations for Blade Runner 2049. Ridley Scott’s 1982 masterpiece Blade Runner only nabbed two Oscar nominations (it lost Best Visual Effects to E.T. The Extra-Terrestrial and absurdly lost Best Art Direction-Set Decoration to Gandhi) even though it deserved a lot more (Best Original Score and Best Cinematography, for starters). Dennis Villeneuve’s belated follow-up fared better, landing a quintet of nods. The race to watch is Best Cinematography, where Roger Deakins landed his 14th nod. Deakins is widely considered the best director of photography working today (credits include Fargo, No Country for Old Men, Skyfall and Sicario), but he has yet to win an Oscar. Let’s hope this is the year he finally prevails.

• The Best Supporting Actor nomination for Woody Harrelson. Harrelson is one of the most interesting performers on the scene today, but a nomination for Three Billboards Outside Ebbing, Missouri was not guaranteed. That’s because Harrelson’s co-star, Sam Rockwell, has been inexplicably grabbing most of the attention for his acceptable albeit showboating, look-Ma!-I’m-acting turn as a lovably loony cop who also happens to be a racist redneck. Harrelson’s charismatic turn is smaller but also more subdued, and it’s a fine contrast to his frightening work in last summer’s War for the Planet of the Apes. In the end, the Academy ended up nominating both actors for their supporting stints in the film.

• No Best Picture nomination for The Florida Project. One of the year’s most critically adored films (see chart below) and a major player with all the major critics’ groups, writer-director Sean Baker’s phenomenal film certainly deserved a Best Picture nomination, as well as additional nods for Baker for Best Director and Alexis Zabe for Best Cinematography. Yet while many prognosticators expected it to be in the mix, I predicted it would only receive a solitary nomination for Willem Dafoe’s formidable supporting performance. (I hated being right.) For all its excellence, the film struck me as too small and too raw to be embraced by an Academy that mostly feeds on glamour and hype. And in Trump’s America, it seems that even liberal Oscar voters don’t want to watch a film about impoverished Americans living on the fringes. Or, as Charlotte Clymer accurately stated on Twitter, “I was legitimately stunned that The Florida Project wasn’t nominated for Best Picture. Then I remembered it’s a gritty, unromantic look at poverty that forces the viewer to recognize conditions that actually exist in this country for millions of children.”

• The Best Supporting Actress MIAs. To be sure, the five nominees represent a solid lineup. But next to Dafoe, the year’s greatest performance was delivered by Hong Chau, who earned accolades (and SAG and Golden Globe nominations) for her breathtaking work in Downsizing. Unfortunately, Alexander Payne’s latest picture was despised by many, and Academy members opted to ignore the picture altogether. Veteran Holly Hunter was largely expected to earn a deserved nod for her stellar emoting in The Big Sick, but she also came up short. And while Tiffany Haddish was a long shot to earn a slot for her hysterical turn in Girls Trip, that would have made for a hip pick a la Melissa McCarthy for Bridesmaids.

• The shutout of Wonder Woman. Superhero flicks were largely a no-show this year, with only Logan earning a nod for Best Adapted Screenplay and Guardians of the Galaxy Vol. 2 nabbing one for Best Visual Effects. Unfortunately, the best superhero film of 2017 was completely ignored. Film adaptations were remarkably slender this past year, which explains how Logan cracked the lineup alongside the deserving likes of Call Me by Your Name and Mudbound. But if they were going that route, Wonder Woman deserved that slot more. Its biggest fault was a shaky final act, compared to Logan’s various flaws in terms of lazy plot devices (a clone?), lackluster villains (particularly Richard E. Gant, who was about as menacing as an inchworm), and repetitive action scenes and narrative beats (including one borrowed from the reviled X-Men Origins: Wolverine). Alas, voters ultimately mistook nihilism for gravitas. Even on just the technical side, Wonder Woman should have contended in the categories of Best Costume Design, Best Sound Mixing and Best Sound Editing. 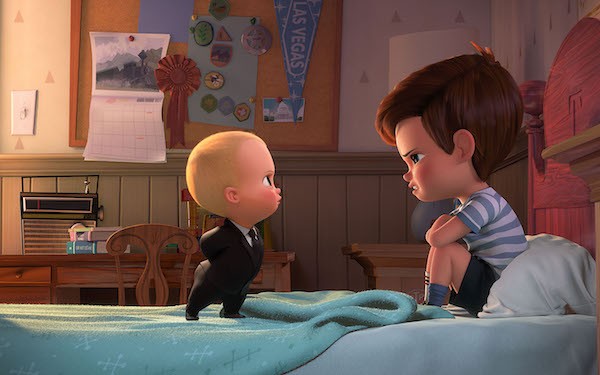 • The Boss Baby for Best Animated Feature. In the earliest years of this category (which began in 2001), the nominees were often junky Hollywood efforts that didn’t belong anywhere near an Oscar (e.g. Treasure Planet, Brother Bear, Shark Tale). Eventually, though, the animation committee began serving up a perfect mix of deserving hometown efforts (e.g. Zootopia, Moana, Inside Out) and foreign and/or indie titles (The Red Turtle, Anomalisa, Shaun the Sheep Movie). So what happened this year? The Pixar gem Coco deserves its placement, as do the Polish production Loving Vincent and the Irish-Canadian effort The Breadwinner. But instead of filling the other slots with acclaimed international efforts like Canada’s Window Horses: The Poetic Persian Epiphany of Rosie Ming (which I caught at Winston-Salem’s RiverRun International Film Festival) or any of numerous Japanese works (among them A Silent Voice and In This Corner of the World), voters opted for Ferdinand, which earned respectable but hardly revelatory reviews, and The Boss Baby, a truly mediocre effort deserving of its negative reviews. Why the backsliding on the part of the Academy? Easy. Whereas it used to be that (following the protocol of most other branches) only animators nominate animated productions, a rule change this past year now allows everyone to weigh in. As Collider’s Matt Goldberg presciently wrote back in April 2017, “This is going to strike a major blow to the category’s diversity... With voting now open to the entire body, the studios have far more power because their films have wider distribution. It wouldn’t shock me if we’re hearing nominations for The Boss Baby and Despicable Me 3 next year.”

• Speaking of Star Wars: The Last Jedi, composer John Williams earned his 51st nomination for that film, extending his record as the most nominated living artist (Walt Disney still has the most overall, with 59). However, Williams was overlooked for his score for Steven Spielberg’s The Post. And speaking of The Post, Best Actress contender Meryl Streep earned her own record-extending 21st nomination, by far the most for any actor in Academy history (Katharine Hepburn is a distant second with 12).

• Christopher Plummer now becomes the oldest person ever nominated for an acting award, cited for Best Supporting Actor for All the Money in the World. At 88, he surpasses Gloria Stuart, who was 87 when she was nominated for Titanic.

• Mudbound deserves a mention for breaking through on two different fronts. Rachel Morrison becomes the first woman ever nominated for Best Cinematography, and the movie itself becomes the first Netflix production to score major nominations (Best Supporting Actress for Mary J. Blige and Best Adapted Screenplay for Virgil Williams and the film’s director, Dee Rees). 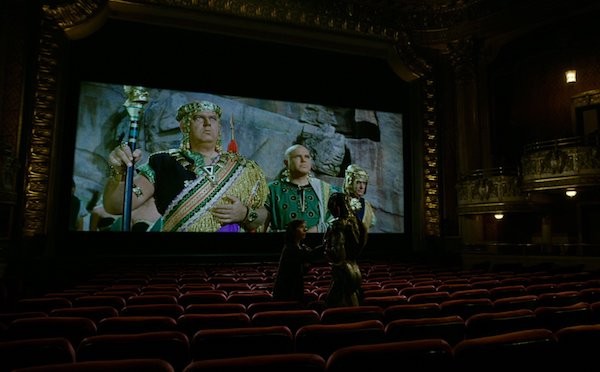 These were the films nominated by the Academy for Best Picture.

Based on a national sampling of 754 critics, these were the films that appeared the most frequently on 10 Best lists.

6. The Shape of Water

These were my picks for the year's best movies.

These were the year's biggest moneymaking releases.

2. Beauty and the Beast

7. Jumanji: Welcome to the Jungle

OK, we now have a sense of which films reigned as the biggest and/or best of 2016. But what about the worst? Glad you asked. Based on cumulative scores at Rotten Tomatoes and elsewhere, these were the year's biggest turkeys: