The Ratings Game, The Return of the Living Dead, To Have and Have Not among new home entertainment titles | View from the Couch | Creative Loafing Charlotte
Switch to the mobile version of this page.

The Ratings Game, The Return of the Living Dead, To Have and Have Not among new home entertainment titles 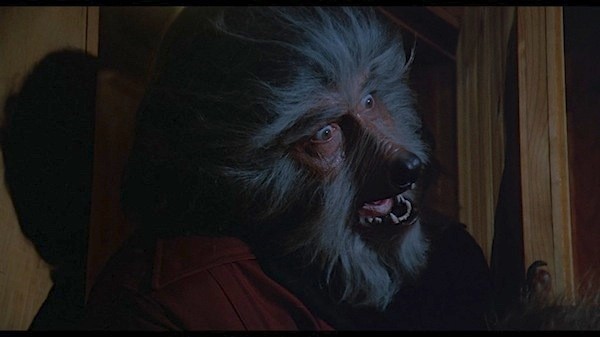 The Boy Who Cried Werewolf (out next Tuesday) finds a father (Kerwin Mathews) and his young son (Scott Sealy) encountering a werewolf in the woods near the family's secluded cabin; Pop kills him, but not before being bitten himself. Soon, Dad is transforming into a lycanthrope on a regular basis — his son knows the truth, but he can't find anyone to believe him. The risible werewolf makeup sinks this picture almost from the start, with some daft plotting and Sealy's irksome emoting further sealing the deal. The most creative acting comes from the picture's scripter, Bob Homel, who's cast as the leader of a band of roving Christian hippies. 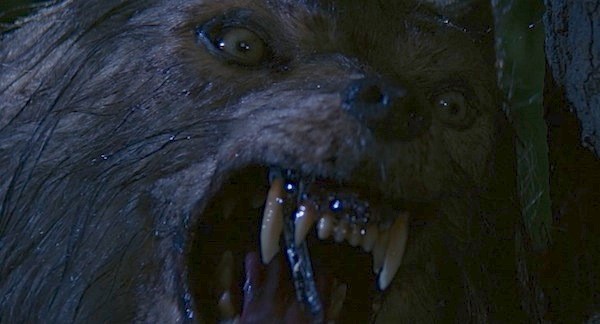 It's impossible to hate any movie in which the hero is a magnificent German Shepherd, but that angle is about all that Bad Moon has going for it. Adapted by writer-director Eric Red from Wayne Smith's novel Thor, this stars Mariel Hemingway as a lawyer and single mom living with her young son (Mason Gamble) and their dog Thor. Her photojournalist brother (Michael Paré) comes to visit, and only Thor senses that this beloved family member is now also a fearsome werewolf. Bad Moon is extremely thin on the narrative side, and Paré's character fails to make consistent sense, but the effects aren't bad. 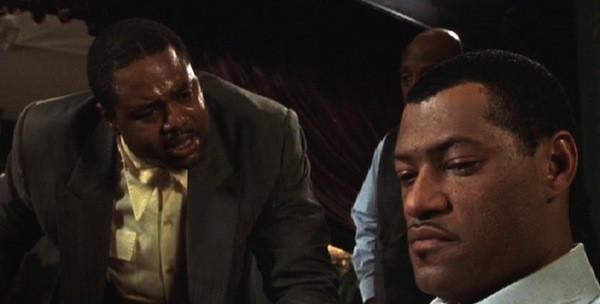 HOODLUM (1997). This impressively mounted if overly familiar gangster tale stars Laurence Fishburne as Ellsworth "Bumpy" Johnson, who rose to prominence as the head of the local numbers racket in the Harlem of the 1930s. He finds his turf constantly being invaded by hotheaded mobster Dutch Schultz (Tim Roth), and he debates whether to take care of the problem by forming a risky alliance with suave crime lord Lucky Luciano (Andy Garcia). Strong performances propel this overlong period drama, not only by the three marquee names but also from Chi McBride as Bumpy's easygoing cousin and Clarence Williams III as Schultz's morally conflicted gunman (look also for Cicely Tyson, Vanessa Williams and Queen Latifah in key supporting roles). Like most Hollywood products, Hoodlum plays loose with the historical record — for starters, district attorney Thomas E. Dewey was revered as an honest man who sought to destroy organized crime (his nickname was even "Gangbuster"), but because he's played here by William Atherton (jerks in Die Hard and Ghostbusters, among others), you can bet he'll be painted as utterly corrupt. Yet such dramatic license is a given; more detrimental to the film's success is that it's awfully familiar stuff, offering little that's new to the tattered gangster genre. For a more interesting crime flick also set in Harlem and also directed by Bill Duke, try to track down 1991's A Rage in Harlem, with Forest Whitaker and Danny Glover.

MY FELLOW AMERICANS (1996). Two former U.S. Presidents who can't stand each other must eventually work side by side to save their own skins once they get entangled in a dirty deal involving the current Prez. That's about all the plot needed for this breezy comedy that triggers plenty of silly grins but rarely anything more hearty. Still, this is the sort of wafer-thin material that survives on the charisma of its stars, and in Jack Lemmon and James Garner, it has two of the best. As former Republican President Russell Kramer, Lemmon gets to be the grumpier old man of the pair, criticizing his opponent's womanizing ways and moping that he's been all but forgotten by the nation. Garner, as former Democratic President Matthew Douglas, plays the easygoing liberal, expressing his support for the gay rights movement (the pride march was filmed in Asheville, as were select other scenes) and talking fondly about his presidential penis, nicknamed "Blinky." The humor is clearly of the lowbrow variety, but Lemmon and Garner handle their lines with the conviction of Royal Shakespeare Company members tackling Macbeth. And while most of the supporting players fade into the background — Lauren Bacall is wasted as Lemmon's wife, and I wish Dan Aykroyd, playing corrupt Republican President William Haney, had based his portrayal on his SNL/Nixon impersonation rather than just coasting — John Heard has some funny moments as a Vice President so dumb, he probably couldn't spell "potato" any more accurately than Dan Quayle.

DVD extras consist of bloopers and the theatrical trailer.

NIGHT AND FOG (1955). Alain Resnais' Night and Fog (nuit et brouillard) runs barely over 30 minutes, yet it manages to pack a lifetime of horrors into its half-hour length. Considered to be the first significant documentary about the Nazi concentration camps (the film was commissioned as a memorial on the 10th anniversary of the end of World War II and the liberation of the camps), it finds Resnais employing archival footage as well as narration penned by poet and camp survivor Jean Cayrol to create a masterwork of shocking power. The color footage used in the film is primarily of Auschwitz in 1955, coming off as a ghost town of ghastliness; the older, black-and-white scenes are the ones inspiring anger and revulsion, showing in rapid succession the rise of the Third Reich, the building of the camps, and the atrocities committed therein. The shot of the products cheerfully sent by manufacturers to be used for heinous medical experiments on the Jewish inmates reveals that Bayer (yes, the aspirin company) was among the Nazi regime's ardent supporters (further Internet digging shows that the company finally apologized for its actions in 1995). The film's other shocks are more visceral, with uncompromising images of skeletal corpses, decapitated heads and more — even Steven Spielberg's hard-hitting Schindler's List looks comparatively benign when compared to the sights on view here. This is essential viewing for both students of film and students of history.

Extras on the Criterion Blu-ray edition include a 1994 audio excerpt with Resnais and a 2009 French documentary about the Holocaust. Incidentally, Criterion has also just released a second collaboration between Resnais and Cayrol: 1963's Muriel, or The Time of Return (Muriel ou Le temps d'un retour), starring Delphine Seyrig (Resnais' Last Year at Marienbad star) in a drama about a woman and her son who are both haunted by their memories. Extras on this edition include excerpts from a 1969 interview with Seyrig and a 1980 documentary on Resnais.

THE RATINGS GAME (1984). Despite garnering stellar reviews upon its debut 32 years ago, the first original movie produced by Showtime has been largely MIA since then, with its only home-video outings proving to be on VHS from Paramount and, in a badly scanned version renamed The Mogul, on DVD from the no-name Legacy Entertainment. Kudos, then, to Olive Films, for not only bringing the film back from the void via new Blu-ray and DVD editions but for also sweetening the deal with a 28–page booklet full of trivia, photos and choice quotes. Danny DeVito (who also directed) stars as Vic De Salvo, a trucking magnate who hoofs it from New Jersey to Hollywood in the hopes of becoming a TV celebrity. He shops his scripts around to all the networks but none bite — at least until circumstances lead to the struggling network MBC getting hold of his wretched screenplay for Sittin' Pretty (a show that makes Three's Company look like Hill Street Blues) and shooting the pilot episode. But the only way for Vic to ensure his baby is a smash hit is to tamper with the rating system (the fictional Computron subbing for the actual Nielsen) and, for that, he turns to his girlfriend Francine (Rhea Perlman), who happens to work at Computron. The razor-sharp script by Jim Mulholland and Michael Barrie contains countless knowing digs at the TV industry, and the mock shows created for MBC (H.O.T. B.O.D.S. and Levar, the pimp series Nunzio's Girls, etc.) are inspired. Look for future Seinfeld co-stars Jerry Seinfeld and Michael Richards in small parts.

THE RETURN OF THE LIVING DEAD (1985). Dan O'Bannon, best known for co-scripting such sci-fi gems as Alien and Total Recall, made his directorial debut with this extremely gory and extremely goofy horror outing that has since achieved a modicum of cult enshrinement. Playing up the humor in an effort to differentiate this from George Romero's zombie flicks, O'Bannon and his fellow scribes (including John Russo, who also co-wrote Romero's original Night of the Living Dead) have Frank (James Karen) and Freddy (Thom Matthews), two employees at the Uneeda medical supply warehouse in Louisville, Kentucky, accidentally release not only a zombie from a misplaced military canister but also the attendant gas that soon turns the corpses at nearby Resurrection Cemetery into the walking dead. Burt (Clu Gulager), the Uneeda boss, is summoned to contain the crisis, and he in turn seeks assistance from a neighboring mortician (Don Calfa). Meanwhile, Freddy's girlfriend (Tina Randolph) and her punkish friends have picked the wrong night to party in the cemetery. The makeup effects are tremendous, and Calfa and especially Karen are hilarious as working stiffs (no pun intended) who end up fighting for their lives. It's just too bad the ending is so abrupt and unsatisfying.

Blu-ray extras include four separate audio commentaries, with participants including the late O'Bannon, Matthews and author Gary Smart (The Complete History of The Return of the Living Dead); a making-of documentary; the final interview with O'Bannon; pieces on the film's effects and music; and a featurette on '80s horror films. 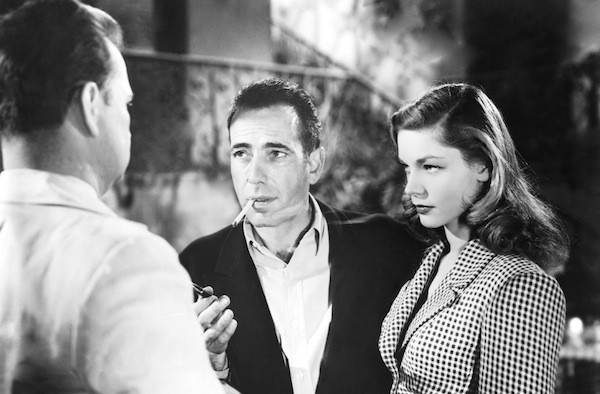 TO HAVE AND HAVE NOT (1944). This reworking of Ernest Hemingway's novel (with a script co-written by William Faulkner and Rio Bravo's Jules Furthman) marked the first of four screen teamings of Humphrey Bogart and Lauren Bacall, although it's the last to finally be brought to Blu-ray by Warner Bros. As with most things Bogie, it was worth the wait: Second only to The Big Sleep (reviewed here) as the best of the love birds' quartet of films together (the others were Dark Passage, reviewed here, and Key Largo, reviewed here), it's yet another gem from Howard Hawks, still the most underrated of all great American directors. Not surprisingly, this picture has Casablanca coursing through its veins, what with its World War II time period, its bustling bar setting, a couple (Dolores Moran and Walter Molnar) on the run from Nazis, a laidback piano player (Hoagy Carmichael), and Bogart as an apolitical smoothie who sticks his neck out for nobody — indeed, about all that's missing are those illusive letters of transit. Bogart's cast as Harry Morgan, an expatriate who runs a charter-boat service in Martinique with the soused assistance of his friend Eddie (Walter Brennan). He strikes up a heated relationship with an American drifter named Marie (19-year-old Bacall in her film debut), but their wooing gets frequently interrupted by skirmishes between French resistance fighters and pro-German Vichy officers. The dialogue crackles (including the legendary "whistle / blow" line), Bacall sizzles, and Bogart captivates.

Blu-ray extras include a making-of featurette; the 1946 Merry Melodies short Bacall to Arms; and the theatrical trailer.

Tags: View from the Couch, film, review, View From The Couch, Blu-ray, DVD, Matt Brunson, The Boy Who Cried Werewolf, Bad Moon, Hoodlum, My Fellow Americans, Night and Fog, The Ratings Game, The Return of the Living Dead, To Have and Have Not