One dad runs interference against the worst of children's entertainment 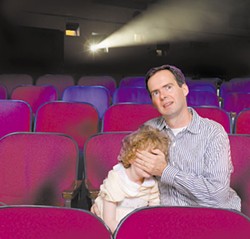 When I hear other parents talk about kid's entertainment, they typically use terms worthy of a sudden drop through Dante's nine circles of hell. Comedians, commentators and chronicles of parenting, such as Neal Pollack's recent book Alternadad, describe the likes of Baby Einstein videos and the Wiggles as lesser demons, with Barney the Dinosaur occupying Satan's place at the center.

The likes of Boohbah and Caillou grate on me as much as the next parent, but my perspective's a little different. As a pop-culture critic, I've always been interested in cartoons, puppetry and comic books, both the "mature" and kid-friendly versions. I'm sort of a volunteer on the front lines of children's media, rather than a draftee.

Sometimes the critic's job conflicts with the parental duty. For instance, the advance screenings of Pixar Studios' rat-in-the-restaurant film Ratatouille posed a dilemma. Should I take my daughter to a screening I'm covering as a critic? Pixar arguably makes the finest family-friendly product in the world, but what if the film's too intense or inappropriate? Usually I'll go see such a film solo, to take notes for review while vetting it for my daughter -- but I have to keep it secret. It wouldn't be cool to say, "Guess who saw Ratatouille while you were at swim class, sucka?"

After raising my daughter for four and a half years, I've found that only occasionally can I share the things I like with my child, like the time last month when we watched one of the Stephen Fry/Hugh Laurie "Jeeves & Wooster" episodes from Masterpiece Theatre. The vast majority of the time, however, we hang out at her level, where the movies and music can have a lot of charm -- and quite a few booby traps.

I don't care much about being a "cool" Alternadad-style father, or maintain illusions about how much I can control what my daughter will like or discover, especially as she gets older. Mostly I try to introduce her to things that fit her interests, while filtering and running interference against some of what I've discovered to be the "Seven Deadly Sins of Kid Culture." As long as we guard against them, we can enjoy our time together and discover cool new things -- without passing through Hades' candy-colored gates.

One of the first cultural tests for a parent is realizing that material that agonizes you may be good for your kid. Before my daughter was born, I was shocked to learn that my sister was Barney-tolerant -- but she pointed out that it's a benign, trustworthy show, and researchers from Yale call it "nearly a model for what a preschool program should be."

Baby-oriented shows such as Teletubbies seem similarly toothless. The problem stems not from their sexual preferences, which are clearly nonexistent, but the show's implicit purpose to teach babies to watch TV. The American Academy of Pediatrics recommends no television or other electronic media for children under the age of 2, yet shows such as Teletubbies or the BabyFirstTV channel seek to train infants to be TV watchers. The concept scares the bejesus out of me, and fortunately my wife showed admirable discipline at turning off the TV.

The Smart Parent's Guide to Kids' TV opposes using television as a baby sitter (or what we call in our household "The Neglect-o-matic"), but defuses some of the knee-jerk alarms against television for kids. Since our daughter was born, we gave up cable TV, keeping her choices (and level of commercial interruptions) to a minimum.

It was a revelation to me that even innocuous, insipid shows on PBS Kids might not all be equal, particularly when I compared Clifford the Big Red Dog with Dragon Tales. At first I preferred Clifford, because I liked the books when I was young, and the late John Ritter voiced the pachyderm-size pooch. More shrill and saccharine is Dragon Tales, the maddeningly inane adventures of human kids in candy-color Dragonland, featuring guests such as Princess Kidoodle of the Doodle Fairies.

It slowly dawned on me, however, that a high proportion of the Clifford stories involved characters behaving foolishly and receiving correction, while Dragon Tales emphasized working together to overcome phobia or accomplish a goal. Clifford seems more interested in shame as a motivation, while Dragon Tales rewarded achievement. Sometimes banality has a purpose, so it's back to Dragonland for us.

Recently I introduced my daughter to one of the greatest works of art of the 20th century: the 1953 Looney Tunes cartoon Duck Amuck, in which the animator plays existential pranks on Daffy Duck. A few mornings later we were sitting on the floor of her room playing with toys, and my daughter smiled. I asked her what was so funny, and she said, "Ho, ho, that's rich. Now how about some color, stupid?" quoting Daffy Duck verbatim.