The William Castle Film Collection among new DVD reviews | View from the Couch | Creative Loafing Charlotte
Switch to the mobile version of this page. 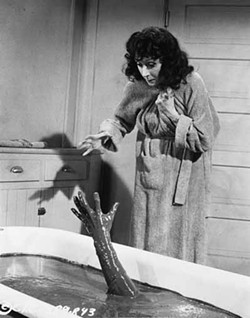 LAND OF THE LOST (2009). The surprising thing about Land of the Lost isn't that it contains several hearty laughs; the surprising thing is that it contains any laughs at all. After all, Will Ferrell vehicles are increasingly becoming known for their inability to generate honestly earned guffaws, as the comedian generally calls it a day after establishing an ever-so-slight variation on his idiotic man-child routine and then throwing a couple of on-screen tantrums. Yet the reason this new picture works on occasion is precisely because it isn't a Will Ferrell movie; rather, it's a movie that just happens to star Will Ferrell. Updating the TV kitsch classic from the 1970s, we find Dr. Rick Marshall (Ferrell), a disgraced scientist, studying time-space vortexes in the hopes of being able to visit other eras and places. He gets his wish when he's sucked back into a prehistoric land, with hottie research assistant Holly (Anna Friel) and sarcastic redneck Will (Danny McBride) by his side. There, the three befriend a randy ape-man named Chaka (Jorma Taccone), steer clear of a rampaging dinosaur, and battle an army of lizardmen known as the Sleestak. Land of the Lost works best when it plays up both the campy nature of the original show and the quirkiness seemingly inspired by ad-libbing between its male stars. The picture is at its absolute worst when it hands Ferrell the entire spotlight and allows him to do his standard shtick; those moments threaten to envelop the entire picture with a stench that's impossible to shake. Then suddenly, we're back in the land of the surreal, and the welcome eccentricity cuts through the mundanity like a knife through cheese.

DVD extras include audio commentary by director Brad Silberling; three deleted scenes; and a day on the set with McBride.

WHATEVER WORKS (2009). It's a fact that several of Woody Allen's movies have found him paired on-screen with women decades his junior (Mira Sorvino, Tiffani Thiessen, Mariel Hemingway, etc.). But with Whatever Works, it appears the 73-year-old filmmaker finally drew the line and elected to pair 21-year-old Evan Rachel Wood with someone closer to her own age. So he sent in 62-year-old Larry David to pinch-hit. David, the star of TV's Curb Your Enthusiasm, essays the role of Manhattan misanthrope Boris Yellnikoff, who has nothing but contempt for everyone and everything. Into his life stumbles a Southern runaway named Melodie St. Ann Celestine (a charming Wood), and although he treats her with the same level of disdain as he treats the rest of humanity, she ends up falling for him. And in the face of her inherent goodness (to say nothing of her supple young flesh), he finds his defenses weakening just a tad – enough, anyway, to marry the ill-educated child. But their happiness could be short-lived once Melodie's Bible-thumping mother (Patricia Clarkson) arrives from the Deep South and immediately tries to break them apart. David's character is so rancorous – and his performance so one-note (this isn't acting as much as it's a standup comic turn captured on celluloid) – that the couple's relationship is only believable when filtered through Allen's own lecherous sensibilities. For the most part, this is a rehash of themes, discussions, jokes and characters we've seen countless times in past Allen efforts. One ultimately gets the impression that when scripting Whatever Works, Allen was hardly working.

The only extras are trailers for Whatever Works and An Education.

THE WILLIAM CASTLE FILM COLLECTION (1959-1964). Arriving on the scene just in time for Halloween is this boxed set that contains the eight pictures the legendary filmmaker directed and produced for Columbia Pictures within a six-year span. True, such memorable works as 1959's House on Haunted Hill and 1965's I Saw What You Did are missing (they were made for other studios), but this contains the bulk of Castle's most popular pictures, along with some oddities that, while not exactly ripe for rediscovery, are worth a peek for their novelty value.

Perhaps Castle's most outrageous film, The Tingler (1959) also stands as one of his best. Vincent Price stars as a scientist who discovers that fear manifests itself as a physical creature that attaches itself to the frightened person's spinal cord, and that the only way to get rid of it is through screaming. Credit this picture for originality, but also give it props for smartly playing around with the conventions of cinema itself, as witnessed via one segment in which the blood in this otherwise black-and-white feature is presented in color, or in the climactic sequence in which "The Tingler" terrorizes a packed movie theater.

13 Ghosts (1960) is slender but fun, as mild-mannered museum guide Cyrus Zorba (Donald Woods), wife Hilda (Rosemary DeCamp), teenage daughter Medea (Jo Morrow) and young Buck (Charles Herbert) inherit a strange mansion bequeathed to them by Cyrus' late uncle, Plato Zorba (are these great character names or what?). It turns out that not only is the house haunted, it also contains a large fortune stashed away by the deceased, demented relative. Margaret Hamilton, The Wizard of Oz's Wicked Witch of the West, appears as the estate's mysterious housekeeper; this is also the rare film to prominently feature a Ouija board.

Castle clearly was influenced by (and often mimicked) Alfred Hitchcock, and Homicidal (1961) is such a blatant rip-off of 1960's Psycho that a lawsuit probably wouldn't have been without merit. Yet while traveling along similar lines, Castle and scripter Robb White manage to include enough originality that the shock ending still has the power to catch many viewers off guard. Unlike Psycho, this film's central blonde (played by Joan Marshall) is villain rather than victim, yet there's still a squeaky-clean heroine, her dullard boyfriend, a crotchety old woman in a wheelchair, and a soft-spoken young man. To reveal more would be criminal.

The period tale Mr. Sardonicus (1961) relates how an Eastern European peasant (Guy Rolfe) is forced to dig up his late father's grave in order to retrieve a winning lottery ticket. The gruesome endeavor leads to fortune but also brings on a curse that leaves the man's face frozen in a permanent, grotesque grin. Now a baron, Sardonicus summons his wife's (Audrey Dalton) former lover, a renowned London doctor (Ronald Lewis), to cure him of his affliction ... or else. This handsome but occasionally meandering drama admittedly makes creative use of several nasty leeches.

Castle begins a drastic freefall with Zotz! (1962), a supernatural comedy in which a college professor (Tom Poston) discovers that an ancient coin in his possession gives him various powers (none too exciting). There's an uproarious scene involving an attempt by a rival instructor (a pre-Gilligan's Island Jim Backus, easily stealing the show) to deliver a speech, but other comic situations are frightfully anemic.

13 Frightened Girls (1963) actually reveals 14 girls in some group shots and 15 in others, but such sloppiness quickly becomes the norm in this daft espionage yarn that emerges as the worst film in the collection. A couple of decent actors (All About Eve's Hugh Marlowe and Jaws' Murray Hamilton) find themselves surrounded by rank amateurs in this story of a diplomat's perky teenage daughter (the dreadful Kathy Dunn) who uses her position of privilege to steal Cold War secrets in order to aid the U.S. This was originally set to be called The Candy Web (the heroine's name is Candy, you see), but it's a turkey under any moniker.

The Old Dark House (1963) was Castle's ill-advised attempt to remake the 1932 classic of the same name. Instead of the original's Boris Karloff and Charles Laughton, we now get Zotz!'s Tom Poston, hardly a fair tradeoff. Poston plays an American car salesman who journeys to a remote English estate to meet its eccentric inhabitants. Upon arrival, he learns that a family fortune is at stake, and, not coincidentally, the members of the household start dropping like flies. As the most pompous of the clan, Robert Morley provides the only spice in this clumsy comedy-thriller.

Strait-Jacket (1964) finds Castle regaining much of his former luster by helming this hit about a woman (Joan Crawford) who hacks up her husband (yes, that's an unbilled Lee Majors) and his girlfriend with an axe in front of her young child. Twenty years later, Mom is released from the insane asylum and goes to live with her now-grown daughter (Diane Baker), but has she really been cured of her violent impulses? The twist ending is one of the most obvious ever put on film (the script is by Robert Bloch, who wrote the novel on which Psycho was based), but Crawford's campy histrionics and some neat stylistic flourishes make this worthy entertainment.

Ever the consummate showman, Castle was known as much for his promotional gimmicks as for the movies themselves. For The Tingler, he had select theater seats wired to provide viewers with an electric jolt at crucial moments in the film, while the viewing of 13 Ghosts required special glasses for a process he termed "Illusion-O." These innovations and others are discussed in the documentary that's included in the set (Spine Tingler!: The William Castle Story) as well as in various retrospective featurettes. Other DVD extras include two episodes from the short-lived TV series Ghost Story (on which he served as executive producer); alternate sequences; and theatrical trailers.