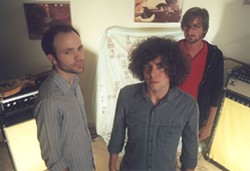 Charlotte's Calabi Yau would love to see you at their Snug Harbor date with Athens' Mouser on Wednesday, Oct. 10 -- but they'd like you to know you have a standing invitation to their house, too.

Dubbed the Yauhaus, the band's studio/practice space/residence has become one of the city's premiere house show venues, hosting an average of three shows a month this year and between 40 and 50 during Calabi Yau's three-year tenure there. Bands from as far away as Oregon have found a place to play in Charlotte thanks to the CY trio of drummer Davey Blackburn, guitarist Robin Doermann and bassist Bo White.

"In the punk and indie rock communities, the house show is a big deal," says Blackburn. "That's how a lot of bands make it when they go on tour, and it's really awesome to be a part of that.

"We get inquiries every day from people who need shows, and we get to swap shows with people. We give a show at our house, and they usually try to set us up with a place to play, a place to stay and they take us to eat sometimes. It's just a really good way to network."

Calabi Yau play what fellow Loaf scribe Tim Davis colorfully describes as "part free skronk, electric blooz, fed-back blips and twitters, and not a little bit of Drano-drinking drone," and their house shows reflect their broad musical interests. On Oct. 23, for instance, Baltimore's Videohippos -- part of the that city's growing Wham City collective, which includes Dan Deacon -- bring their swirling and churning, morning-after melodies and video madness to the Yauhaus.

House shows differ from club and venue gigs in several key ways. For one, they're only legal if they don't charge, so donations are key to a house's longevity. If a band can earn gas money to the next gig, it's usually considered a success. White, who does Yauhaus' booking, says there's also an unwritten etiquette regarding decent sound systems, offering bands a free place to crash, providing directions and answering e-mails in a timely fashion.

Then there are your neighbors, who are only three phone digits removed from calling the cops at any time. When the Calabi Yau moved into the Yauhaus, one of their first priorities was to meet the surrounding neighbors, many of whom are homeowners.

"We went and introduced ourselves and we're all pretty upstanding looking citizens and were really polite," says White. "We told them we were going to have house shows and if they ever had a problem just to let us know before the cops because we'd take care of it or stop the show right then if they needed that."

On the rare occasions when the police have come, they've usually been hassle-free reminders to keep the door closed when the band is playing. Compared with other towns like Athens, White says, where the cops are seemingly always on the prowl to shut down house shows, Charlotte's house show community has it fairly easy.

And with the growth of Ethernet information kiosks like MySpace.com, the house show phenomenon is growing. Calabi Yau estimate that nearly half of their 300 or so live dates have been house gigs from Baltimore to Oberlin and New York, many often leading to venue dates on subsequent tours.

For the band, the house shows are a natural fit with their strong DIY ethic. When they're not hosting, touring or practicing three times a week at the Yauhaus, lately they've been recording the follow-up to their Actuel EP there, the tentatively titled full-length Ipso Facto/Eo Ipso, to be released on Oswego, N.Y.'s Alone Records.

While the band's trademark blend of high-energy, intricately crafted dissonance remains central, they say the new record's songs will prove their most melodic to date. Part of that is due to White's previous throat problems, as well as the band's switch to a two-guitar attack. White cautions, though, that there's still plenty of Sonny Sharrock-inspired controlled guitar chaos.

In any case, it's a safe bet Calabi Yau will continue making music that's difficult to categorize -- which, when composed and executed as thoughtfully as theirs, is never a bad thing.

"This idea's been with us from the get-go and only gotten stronger: if we're playing something, and we can think of a band that it sounds like, we've either got to stop playing it right then or try to change it to where it doesn't sound like that," says White. "It's not just an implied rule, either."

You could call it part of the Yauhaus Rules.

For more information on Yauhaus shows or the Calabi Yau gig calendar, go to: www.myspace.com/calabiyau