The Zulus have arrived 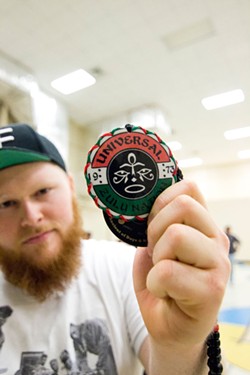 The Zulus have come to Charlotte, and I don't mean the African warriors, or even the Mardi Gras krewe. I'm talking about the Universal Zulu Nation, an international hip-hop awareness group that organizes cultural events and community activism, mainly aimed at youth.

The organization was founded in the 1970s by former gang members in the Bronx who had turned their lives around and committed themselves to making a positive impact in their communities. They ran drug dealers out of housing projects, escorted women to their cars at night, mentored young people and created events to reach youth through local forms of dance and music — forms that would eventually become known as the break-dancing, emceeing and DJing elements of hip-hop culture.

The Universal Zulu Nation recently celebrated its 39th anniversary and now boasts chapters in more than 20 countries, with membership estimated in the tens of thousands.

So what brings the group to Charlotte?

In 2011, Brian Williams, a Queens University graduate and trilingual local rapper, attended the Zulu Nation anniversary in New York. After spending the weekend with the organization's elders and witnessing their work firsthand, he knew he wanted to be a part of it. He saw it as a way to fill a void he's noticed not just in Charlotte, but in the entire Southeast.

"You don't see volunteer organizations where the kids are consistently attending and getting their parents involved to spread knowledge in underserved communities," Williams said. He cited as inspiration a fellow Zulu from Holland named Cream, who throws huge youth jams sponsored by local businesses and backed by the state.

In November 2012, after a year of studying, taking tests and networking, Williams joined with partners Michael Peltier and Step Tekola to form the Cosmic Union Chapter — Charlotte's own chapter — of the Universal Zulu Nation. It now counts 10 members and two leaders, Williams and Peltier. To apply, potential members must log 40 volunteer hours and read three books of their choice.

For an organization that is only a few months old, its founders' agenda is ambitious. When asked about the group's immediate plans for community involvement, Williams rattled off a laundry list of workshops and demonstrations it plans to hold, with subjects ranging from break-dancing and hip-hop history to nutrition and organic gardening.

"We are b-boys, MCs, DJs and graffiti artists, but also teachers, tradesmen, linguists and chefs," he said.

Williams said the timing is perfect because he sees a lot of momentum building in Charlotte around the concept of a cypher, a circle in which b-boys or MCs present their skills and build off each other's strengths, rather than compete against one another. He wants to channel that concept and inspire the crowd to work in the community, rather than just confining itself to Monday nights at Snug Harbor and occasional jams at Common Market.

The Cosmic Union Zulus had their first chance to do that recently at Midwood High School, when they partnered with another local nonprofit, International House, to hold a hip-hop empowerment workshop and dance exchange with a visiting delegation of students from Brazil.

The Jan. 22 event began with a panel of hip-hop community leaders speaking about how the culture had changed their lives and how they presently used it for activism. There was a focus on using hip-hop to overcome racial and economic barriers and on finding your personal talent and the confidence to use it. A teacher from Garinger High School spoke about how simply knowing the rap songs his students liked allowed him to engage with them in more personal ways, like recording study guides over well-known beats, which helped their learning process and their overall grades.

After the panel, the dance exchange commenced with young people from the United States and Brazil each showing off their hottest b-boy and Samba moves. They bonded through rhythm and movement, laughing and dancing together, despite linguistic and cultural differences.

Before the event ended, one Brazilian student thanked everyone in attendance and said he was previously unaware of any constructive hip-hop activities in the United States because he had only seen the culture associated with violence in the American media. I asked Williams if he thought it was possible to ultimately overcome that perception.

He acknowledged hip-hop carries a stigma but said he considers it his organization's job to dispel that stigma through actions, tenets and teachings. "The essence of our culture is positive expression in all forms, whether that means jumping out of your chair to move your body, or putting your name way up high for all to see. We leave a mark of purity wherever our vibe is cast."

He's especially enjoyed watching families come together because of the group.

"The important thing is demonstrating, instructing, and then watching as the youth contribute their twist to it. Every parent experiences ecstatic pride watching their child express themselves artistically. Its an undeniable, universal good, and we're here to spread it like wildfire across Charlotte."

Editor's Note: The writer served as a panelist at the hip-hop empowerment workshop.