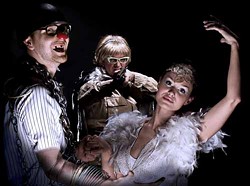 Walking into the current production of Welcome to the Monkey House at Carolina Actors Studio Theatre, my wife Sue and I were actually welcomed by a gorilla while we were still in the parking lot. The CAST lobby and bar are similarly themed: plastic bananas issued at the box office in lieu of tickets, shanty grass and tropical bamboo in the interior.

CAST artistic director Michael Simmons devised this adaptation of Kurt Vonnegut's famed short story collection, freshly adapting seven of the stories for the stage and co-directing the premiere with Charles LaBorde. Robert Lee Simmons plops a super-sized Smith-Corona typewriter in the middle of his conceptualized set design, paired with a projection screen above it -- which becomes the ancient medium of typing paper between segments, as the opening paragraphs of each story are tapped out in animations.

Further homage to the act of writing is provided by Kurt Vonnegut himself, sitting on his typewriter as if it were a front porch and offering a typically oblique and pithy preface. The tech flourishes continue to bombard us in the opening story, "Harrison Bergeron," including outré costumes by Wendy Deitz and Wendy Bailey, uglifying masks by Dot and Maria Marciano, clumsy choreography by Shannon Wightman-Girard, and raucous sound by Jay Thomas, Casey McCann, Simmons pere, and a deadly battery of live brass.

Among the performers, the heaviest lifting is done by Scott McCalmont as Harrison, the most handicapped gifted person in 2081 America, and the beauteous Jennifer Lynn Barnette as the Ballerina Empress he adores. You don't want to miss the cameo of Buddy Hanson as Diana Moon Glampers, the Handicapper General of the U.S., who deals with Harrison's rebellion.

So it goes for much of the remainder of the evening, with Barnette and McCalmount paired as the romantic leads in "Who Am I This Time," a goofy romance sparked at rehearsals of A Streetcar Named Desire, and "Long Walk to Forever." A couple of other pieces actually rival "Harrison" for theatrical brilliance, the pleasure-machine concept of "The Euphio Question" and the futuristic rampage of Billy the Poet in the title story.

Ironically, it's J.R. Adduci, the star of Streetcar at Theatre Charlotte less than two months ago, who follows McCalmont's cartoonish Stanley with an even more cartoonish Billy. Adduci is somewhat less successful as inventor Fred Bockman in "Euphio," needing to dial down (or preferably turn off) the Jerry Lewis shtick.

Simmons treats each of the short stories at satisfying length, admirably capturing the elusive spirit of Vonnegut's work. My only problem with the script is the inclusion of "The Manned Missiles," a story that assails the Cold War rivalry between the U.S. and the U.S.S.R. The story is cleverly broken in two so the same cast portrays the surviving families of both the Russian and American astronauts who die needlessly in an outer space clash. Yet the dramatization doesn't sufficiently freshen the static, epistolary nature of the original.

With Russell Rowe as both the grieving fathers, even this weakest link is a worthy attempt.