They Came From Up North 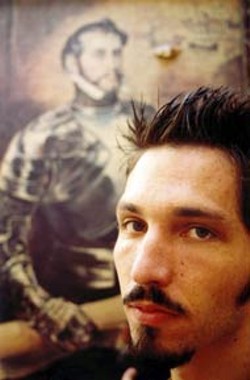 The weather's heating up and so is the I-40 express, bringing some of the Triangle's best acts to Charlotte. After suffering through what one musician wag described as "a post-Superchunk hangover," the Durham-Chapel Hill-Raleigh scene is cooking again with a veritable buffet of acts from the bubbling indie pop of The Rosebuds to the homegrown country of divas Très Chicas. This week several of that area's best acts hit the highway to display their wares here in town. Since the ascendance of Chapel Hill's indie rock brigade (Archers of Loaf, Superchunk and Polvo), the music scene has moved in a decidedly roots-oriented direction. Among these country-inflected groups, no one's light shines brighter than Two-Dollar Pistols. Led by former drummer turned front man John Howie, Jr., the Pistols purvey a dusty, traditional country sound that recalls George Jones. But like many of his generation, the 30-something musician went through a youthful period disowning the country music his father played.

"You get to that point when you're like 14,...where you're like I don't want to be associated with anything my parents like. But I got into some music I still love from that time period, like the Ramones and the Sex Pistols," Howie says.

He only began to appreciate the music — like most Americans, historically — after he heard it championed by the Brits.

"I went to England when I was 19, playing drums for a punk band there. And those guys were all really into Gram Parsons. When you hear something like that, from people who you consider your peers and contemporaries, and they're extolling its virtues, you suddenly can kind of see it," Howie admits somewhat sheepishly.

Howie continued to drum as an in-demand session player into his late-20s while continuing to write songs, performing them from behind the kit in area bands. He eventually grew tired of drumming, chucking both the sticks and the rock & roll to try his cool baritone croon with Two-Dollar Pistol's tear-in-your beer country songs. It immediately caught on.

"Part of it was I had been around long enough that people trusted what I was doing was going to be genuine and not ironic and filtered through some detached perspective," Howie says. "It caught me a lot by surprise. By the time we really started playing out, the whole Whiskeytown thing was happening. Musically I didn't feel we had that much in common with those guys but at least there was an awareness of more roots-based music."

Indeed, while Texas country, bubbling country-folk, and old-timey, Appalachian music are all the rage in the alt-country community, Two-Dollar Pistols work a less traveled corner, with their cross of twangy Bakersfield swing and pre-outlaw, 70s Nashville country. It's a supple, resonant approach with a sonic warmth to cozy up to while Howie breaks your heart.

Django Haskins hasn't developed the following yet that accompanies the Two-Dollar Pistols, but it's not for lack of activity. Since moving to Chapel Hill from New York City two years ago, he's released his third solo recording, a fantastic rock album with Ben Folds proteges Robert Sledge and Snuzz under the name International Orange, and is preparing to release the debut of his latest project, the orchestral/cabaret pop outfit The Old Ceremony.Asked how he came to North Carolina from Manhattan, Haskins quips, "I took a left at Newark."

"I got burned out with New York and I wanted to find a another base of operations. All arrows pointed to North Carolina for me. I had toured down here, played the (Evening) Muse, in fact, a couple times," Haskins says.

The Old Ceremony is a new development that was originally going to be his next solo album. While his earlier albums featured the kind of smart, spiky pop and clever lyricism that earns you immediate comparisons to Elvis Costello, this album was going to be mainly piano, with noir-ish, cabaret pop songs. He recorded the album, then in putting together musicians to perform it fell even more in love with the sound and decided to re-record the album with the new players and make the freshly dubbed Old Ceremony a going concern. Haskins enjoys the switch between playing solo and with the strings and horns of Old Ceremony.

"To be honest, I like to be busy with a lot of different projects. I'm just really interested and excited by a lot of different kinds of music. So it's great for me if I have an outlet for different things at the same time," he says. "[Playing solo] keeps you honest. You can foist any old shit on people if you have enough instruments. Solo, the songs have to stand on their own."

Of course, while the Triangle's popping out new acts like spin-offs of CSI and Law & Order, some of the most popular attractions have been around a while. If you've lived in the Southeast for the last nine years you've probably heard about Hobex, and if not, you've definitely heard of singer/guitarist Greg Humphreys' prior outfit, jangle popsters Dillon Fence.But after the Southern pop of Dillon Fence, Humphreys wanted to go in another direction, having felt very circumscribed by Dillon Fence's reputation and (somewhat formulaic) sound.

"We were trying to do different things, but our record company and our fans wanted the old band and the old songs. It's tough when you're pushing 30, and you're playing songs you wrote when you were 18 years old," Humphreys says.

Hobex takes the elements of Philly R&B and mixes it with deep bluesy grooves. The result is a funky workout with more soul than a jam band, but with a greasy, horn-fueled rock punch that has a whiff of New Orleans in it. What Humphreys is seeking to do in assaying this classic sound is create something timeless.

"When I look at the people in 20th-century music who made a difference or made music that lasts — Louis Armstrong or Bob Dylan or Hank Williams — they were communicating something about human nature," Humphreys told a paper last year. "What Hobex is trying to do is not all dark and it's not all light — it's a little bit of both. It's human."