Marah by the Book 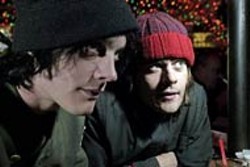 Do what? Marah, the street-jivin', banjo-slingin', South Philly urban homeboy rock & roll throwbacks have been playing backup for an author's reading? What's next? The Oprah's Book Club stamp of approval? A performance on Book TV? Side stage at Nobel Prize-palooza? Okay, the author is Marah Champion No. 1 Nick Hornby, writer of High Fidelity and About a Boy. And unfortunately, his segment of Marah's tour happens in Chicago and New York, but not Charlotte. (Charlotte? Do they even read?) The point is, you never know what the Bielanko brothers — Dave and Serge, the Marah core — are going to do next. Unlike the majority of the band's peers, these two embraces the many contradictions and paradoxes that populate the typical crooked path of a rock & roll career. The Bielankos go where their muse leads them, and the brothers rarely look back.

Take the Hornby/Marah pairing. It was an idea born over after-gig beverages. "Nick started to come see us in New York, and he talked after the shows about how boring the typical Barnes & Noble-type book tour is," says Dave Bielanko, the band's lead singer, songwriter and banjoist. "And we thought, 'Wouldn't it be great to change the venue to a nightclub setting and just loosen everything up.'"

Hornby and the band did a successful test-run of the idea during two European shows — Cologne and The Hague. It only made sense to do encores in the US.

In addition to liberal on-stage wine consumption, the Hornby gigs consisted of the author and rock critic reciting from some of his essays on rock & roll, highlighting certain bands which had a demonstrable effect on him. Marah then followed with a cover song or two of, say, the Clash, before ending the evening with, as Bielanko puts it, the "full-on Marah experience."

Even though Marah will not have Hornby in tow at the Visulite on Friday, Charlotte fans can still see one of the best live rock acts going, an intense, balls-out, sweat-drenched, no-bullshit rock & roll show featuring one of the best front men in the business — Dave Bielanko — and at least one memorable cover tune.

There may even be a song or two from the band's just-completed album, due out in the fall. We'd tell you the title, but Bielanko isn't divulging much about the record. A barrage of early press and leaks may have taken some of the release-date punch from the band's last record, 2004's 20,000 Streets Under the Sky. But the main reason for the gag rule, Bielanko says, is the personal nature of the new record.

"As much as 20,000 Streets was about other people, this one is about us," he says. "It's the most live record we've ever done, and fidelity-wise, it's also the best we've ever done. It's a 'roll-tape' kind of record, and a State of the (Marah) Union record."

It also varies in style from folk to punk, Bielanko says. He makes a point of singling out the album's tenth and final track recorded as an "introspective, 'Formula'-esque, rambling folk song" that wound up as the key to the record. (The "Formula" he refers to is the song "Formula, Cola, Dollar Draft," from the band's debut, Let's Cut the Crap & Hook up Later on Tonight; "Formula" is often cited as the classic Marah song and the yardstick by which all of the band's subsequent material gets measured. During every Marah show, at least one drunken idiot will repeatedly call out, at the most inopportune moment, "FORMULA, DUDE!").

Overall, Bielanko says the new album "should make fans of all our records happy." And those records tell the story of a band with a definite maverick streak.

"One thing I'm proud of as a band is that we're not an elitist band," Bielanko says. "Those bands that make you feel, 'You're not invited to our party' — they're not very rock & roll, are they?"

You can't criticize Marah for that. If one were so cynically inclined, one could say the band's four-album catalog would suggest an inherent inability to capitalize on any trend whatsoever. After all, this is a street-wise, Philadelphia-born-and-bred bunch whose marvelously unique 1998 debut featured the banjo as its centerpiece instrument. Marah quickly became a cult favorite among the alternative-country crowd for mixing poignant, wistful confessionals and up-tempo numbers in a wide array of styles. But rather than ride the crest of that wave at its peak, Marah followed up two years later with Kids in Philly, a raucous, loose-limbed, Beat-like love letter to the band's home town. It was filled with literate patter and tales of legendary denizens and their exploits, legal and (usually) otherwise. The record suggests a grittier, updated version of The Wild, the Innocent, and the E-Street Shuffle-era Springsteen, though the Bielankos turned the Boss' message on its head: Fuck the open road, it's the City that's alive tonight.

Kids in Philly received virtually unanimous critical acclaim, but its sales barely covered the band's bar tabs. The frustrated brothers reacted with an infamous about-face, cutting as many ties as possible to their past, their hometown, and many of their long-standing fans. They moved to Great Britain and remade themselves as a glitzy, decadent arena band. They hired finicky producer Owen Morris (the Brit responsible for the sonic wash of Oasis and the Verve), who promptly buried Marah's best traits — their unique instrumentation and literate lyrics — under an assault of fuzzed-out guitars and overbearing synthesizers. The result was the band's much-maligned 2002 album Float Away with the Friday Night Gods. It didn't sell either, and the world's arenas remained Marah-free.

After that, the differences between the Bielankos and their many fans seemed irreconcilable. But the brothers took some time off, went through some serious re-evaluation and returned to their home base (and New York, for a time). The brothers stand by Float Away's songs, but they have conceded that the recording didn't highlight their strong points. Some of their fans saw this admission as an olive branch and returned to the fold with the release of the well-received 20,000 Streets. The 11 songs on that record are, thematically and instrumentally, a continuation of Marah's first two discs, although the production — mostly by the brothers themselves — retained some elements of Morris' wall of sound.

As for the last record's title, it's an appropriate homage to the underrated British novelist Patrick Hamilton, whose 1930 novel of the same name exposed the dark underbelly of London nightlife. It's also indicative of the band's literary roots, and helps explain the mutual admiration club that is Marah and Nick Hornby. (Now, Hornby has become a huge Hamilton fan.)

"A lot of the influences we use (lyrically) are writers," Bielanko says. "From Stephen King to Charles Dickens — some disposable, some classic, we use it all."