Transformers: Age of Extinction: Preferable to syphilis | Reviews | Creative Loafing Charlotte
Switch to the mobile version of this page. 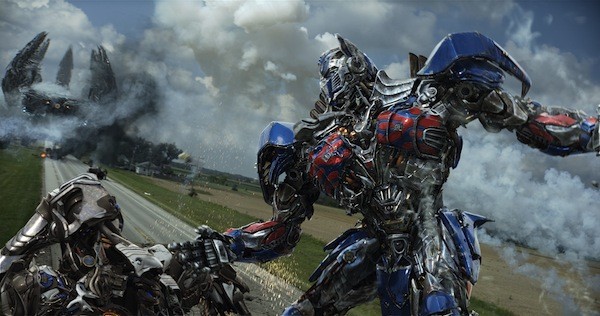 As evidenced by the endurance test known as Transformers: Age of Extinction, Michael Bay's contempt for his audience continues to be matched only by his contempt for the medium of film itself. And if he's going to be so half-assed in putting together a major motion picture, then why should I spend time carefully constructing a review with smooth transitions and penetrating insights? To quote Judy Garland in The Wizard of Oz: Fuck that noise. (Admittedly, I might be thinking of another movie.) Here, then, are 10 random bullet points that popped into my head as I mentally revisited my T:AoE experience.

· First, the good news: Transformers: Age of Extinction, the fourth in the series of films created by the dream team of Bay, Hasbro and Mephistopheles, is better than the previous sequels, 2009's Transformers: Revenge of the Fallen and 2011's Transformers: Dark of the Moon. Now for the sobering afterthought: Even a case of syphilis is preferable to that torturous twofer.

· Mark Wahlberg has replaced Shia LaBeouf as the franchise's human star. This is good news, since Wahlberg is a talented and charismatic actor and LaBeouf is an insufferable little prick. However, at least Bay had the sense to cast LaBeouf as an insufferable little prick so the master thespian wouldn't have to play outside his range. Wahlberg, on the other hand, has been cast as a brilliant scientist, and perhaps not since Steve Guttenberg in the trite 80s flick Short Circuit has an actor labored so mightily — and failed so miserably — at convincing us that he understood what the hell he was talking about when discussing eggheaded science stuff.

· In addition to the Wahlberg-LaBeouf swap, another reason this one is marginally easier to take is because the attempts at comic relief aren't as grotesquely conceived as in past installments. Sure, the sit-com subplot of Cade Yeager (Wahlberg) being an overprotective father to his 17-year-old daughter Tessa (Nicola Peltz) stirs memories of Tony Danza in She's Out of Control (and who wants to be burdened with those memories?), and a Minion-sized Transformer severely tests viewer patience. But at least there are no Amos'n'Andy robots on hand to showcase Bay's racial insensitivity — and no shot of John Turturro's bare buttocks, either.

· Speaking of Turturro... It used to be that name actors would accept small paychecks just for the opportunity to appear in a Woody Allen movie. In these increasingly capitalist times, the trend now is for accomplished performers to accept hefty paychecks for whoring themselves out in Transformers flicks. Now joining the past likes of Turturro, Frances McDormand and John Malkovich is Stanley Tucci, who hams it up as a scientist creating his own line of Transformers through application of the rare metal known as Transformium (hand to God, I didn't just make that name up).

· According to this film, dinosaurs were wiped off the earth by aliens, and this somehow also led to the creation of Transformer dinosaurs known as Dinobots. I gotta confess, I do like it when movies teach me something new about history and the real world surrounding me.

· No one goes to a Transformers flick expecting to hear immortal dialogue along the lines of "Forget it, Jake; it's Chinatown" or "What we have here is failure to communicate" or even "Yo, Adrian!" but the banter concocted by scripter Ehren Kruger has the proven ability to make ears bleed. "Where's your warrant?" asks Yeager of a black-ops creep (Titus Welliver) on the hunt for Optimus Prime. "My face is my warrant!" comes the ingenious reply. Wait, what? Oh, never mind. There's also a moment when hissable right-wing zealot Harold Attinger (played by hissable right-wing zealot Kelsey Grammer) states, "We have a saying here on Earth. The enemy of my enemy is my friend," to which the evil Decepticon bounty hunter Lockdown replies, "I also have a saying. I don't care!" "I don't care"? Is Lockdown a formidable enemy from outer space or a petulant Judd Nelson in a mid-80s Brat Pack flick?

· In preparation for my upcoming cookouts with family and friends, I need to buy some more charcoal at Harris Teeter. Yes, I realize that this has absolutely nothing to do with the actual movie, but it was one of the many thoughts that randomly popped into my head during the interminable battle that takes up the final portion of the film. After all, it's hard to stay focused when what's happening on the big screen is even less exciting than watching golf on TV after having been sleep-deprived for two days. During this grueling stretch of stench, I also daydreamed about my lovely wife, what sort of puppy we should get, early holiday deadlines, and the delicious Kahlua-filled marshmallows I enjoyed at a wild party held this past weekend. I'm pretty sure I also pondered rising gas prices at some point.

· I like John Goodman a lot ... except when he's providing the voice for an annoying redneck Transformer named Hound. Also, his Transformer has a beard and chomps a cigar. Nuff said.

· As expected, product placements run rampant in this film, with one of the primary offenders being Bud Light. That's OK by me: A crappy American beer deserves to be partnered with a crappy American movie.

· Transformers: Age of Extinction lasts 167 minutes. In this case, that's not a running time. That's a prison sentence.

Transformers: Age of Extinction is not showing in any theaters in the area.