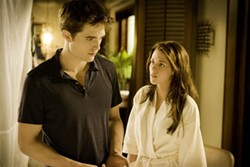 Forget Dickens' A Tale of Two Cities; what we get here is Meyer's tale of two movies. I'm not referring to the fact that the final book in Stephenie Meyer's wildly successful franchise has been split, Harry Potter style, into two separate films, with the second half due exactly one year from now. Even within the confines of The Twilight Saga: Breaking Dawn — Part 1, there exists a dichotomy between the first and second hours, enough that it feels like an incompetent crew was replaced halfway through with one that had at least some inkling of what it was doing.

TTS:BD-P1 opens with 18-year-old Bella Swan (Kristen Stewart) preparing to marry the considerably older — but still Tiger Beat pinup-worthy — vampire Edward Cullen (Robert Pattinson). Although she plans to allow Edward to eventually bite her and turn her into a fellow vampire, she decides to remain human for the honeymoon — a fact that disturbs romantic rival and part-time werewolf Jacob Black (Taylor Lautner). Jacob believes that hanky panky between a vampire and a human might lead to the latter's death, a theory he possibly picked up from enjoying too much hentai. At any rate, the inadvertent S&M sessions between the newlyweds yield something more unexpected than a few bruises on Bella: a pregnancy that will result in either a human baby, a vampire suckling or some ungodly combination of both.

Writer-director Bill Condon, who deservedly won an Oscar for penning the adaptation of Gods and Monsters, has only been assigned helming duties here, with Melissa Rosenberg retaining her job as scripter of all the films. They both deserve equal blame for the first half of this picture, which plays like a drably lit, monotonously written and indifferently acted soap opera. But as the movie is set to reach a point of no return (around the time Bella and Edward gaze into each other's eyes for, oh, the 268th time), some interesting dynamics come into play. Jacob's love for Bella forces him to side with the hated Cullens against the rest of the wolf pack (Lautner has revealed himself to be an acting nonentity in such films as Abduction and Valentine's Day, but his skills at appearing buff and surly make him perfect for this series), while the Rosemary's Baby-esque conundrum — and resultant complications — result in some modest tension.

Even during the superior second half, there are so many pop tunes crammed onto the soundtrack that viewers might feel like the movie was made only to support CD sales, and a sequence involving talking wolves ranks among the most risible of the year. But critiques really have no weight when it comes to films like this. The haters are gonna hate, the fans are gonna love, and everyone else will check the movie listings and their own wallets before deciding if this is the best option for a night on the town.