The real secret? Sloppy yet satisfying 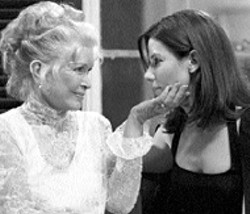 Just as the traditional male-oriented movie has long devolved from character-driven James Cagney gangster flicks and archetypal John Wayne Westerns into obnoxious Jerry Bruckheimer noise pollution, so too has the so-called "woman's picture" (I refuse to call them "chick flicks," a derogatory term that needlessly pigeonholes the works into separatist factions) run over rocky terrain in modern times. Decades earlier, the genre gave us brilliant films on the order of 1937's Stage Door (Katharine Hepburn, Ginger Rogers) and 1939's The Women (Joan Crawford, Rosalind Russell); these days, the works are more problematic, resulting in pieces that represent the good (The Joy Luck Club), the bad (Beaches), and the awkward (Fried Green Tomatoes).

At first glance, it's hard to know what to make of Divine Secrets of the Ya-Ya Sisterhood. Adapted by writer-director Callie Khouri (along with Mark Andrus) from a pair of novels by Rebecca Wells -- Divine Secrets of the Ya-Ya Sisterhood and Little Altars Everywhere -- this is the sort of film that obviously was whittled down from pages and pages of text. I haven't read either book, but given the movie's whiplash schizophrenia, they must have been more comprehensive than what's presented on the screen.

Because it largely takes place in Louisiana (though filming was done in Wilmington), it's appropriate to tag the movie as a big pot of gumbo, with varied ingredients all swimming together in a sea of saucy girl power. Yet while many of these ingredients may stick to the heart, they don't necessarily stick to the head. Divine Secrets is sloppy in a number of fundamental ways, including the basic principle of sound chronology. One character ages at least six years between the Atlanta premiere of Gone With the Wind (1939) and the US entry into World War II (1941). Meanwhile, another protagonist appears to age only 20 years in a span of three or four decades. And it doesn't stop there. Shifting between at least three different time periods, the movie is so haphazard that for the most part, we never figure out which girls grow up to be which women. At one point, there's a suggestion that one of the primary characters was involved in an incestuous tryst, but I'll be damned if the movie ever makes it clear one way or the other. And while one of the principals is revealed to have a brother and a sister, their circumstances are never touched upon, an odd exclusion in a movie that's largely about family matters.

And yet, for all its random chaos, Divine Secrets works because of the power of its convictions -- and its cast. Performers who might not seem especially compatible on paper blend together seamlessly on celluloid, and they punch across the ultimately affecting sensibilities of this curious melodrama.

The title outfit refers to four young girls who form a lifelong bond that will enable them to get through the tough times with the support of one another. Cut to decades down the road, and it's obvious that the club will need to spring into action to save a relationship involving one of its members. Vivi Walker (Ellen Burstyn), a handful if ever there existed one, is outraged that her daughter Sidda Lee (Sandra Bullock), a successful New York playwright, let slip some unfavorable comments regarding Vivi in a Time magazine profile. Vivi swears to have nothing else to do with her now-disowned daughter; this declaration couldn't please Sidda Lee more, since she's spent her adult life resenting a parent who was abusive, alcoholic, and MIA for part of her childhood. Yet Vivi's three comrades in the Sisterhood -- no-nonsense Teensy (Fionnula Flanagan, The Others' spooky housekeeper), witty Caro (Maggie Smith) and fluttery Necie (Shirley Knight) -- realize that if Sidda Lee only knew all the details about her mother's troubled past (Ashley Judd plays Vivi in these flashback sequences), then all might be forgiven and true reconciliation might get under way. So without Vivi's knowledge, they in effect kidnap Sidda Lee, bring her back to the Louisiana of her childhood, and begin to regale her with revelatory stories from the past.

Divine Secrets tackles many themes (even racism gets addressed in one heavy-handed scene), yet at its center this is a mother-daughter story whose roots can be traced back to such vintage soapers as Stella Dallas and Mildred Pierce. That such a potentially hoary device manages to remain moving can largely be attributed to the tough-love approach of Khouri (still best known for her awesome, Oscar-winning script for Thelma & Louise) and the various actresses playing these key roles. As Vivi, Bullock hasn't been this winsome in years, while Burstyn finds the Southern-fried eccentricities in her character without turning her into a caricature. And Judd, whose early promise has rapidly been getting extinguished by too many lame "women in peril" thrillers, is allowed to demonstrate great range as the vivacious Vivi, especially in the disturbing later scenes in which she lashes out at those who love and need her most.

In the other significant roles, that of the other Ya-Yas (or "yo-yos," as another character calls them), Flanagan, Smith and Knight create memorable characters with what relatively little subtext they're given. And while men in these sorts of movies often don't seem to matter to the writer (quick, can you name one defining trait of the guys played by Tom Skerritt, Sam Shepard and Dylan McDermott in Steel Magnolias?), James Garner and especially Angus MacFadyen nicely flesh out their respective roles as Vivi's patient husband and Sidda Lee's patient fiance.

A prime example of summer counter-programming, Divine Secrets of the Ya-Ya Sisterhood should please those folks not especially interested in lightsabers or webslingers. An effective weepie, it should also help beachgoers wash that sand right out of their eyes with a few well-earned tears. *