View From The Couch | View from the Couch | Creative Loafing Charlotte
Switch to the mobile version of this page. 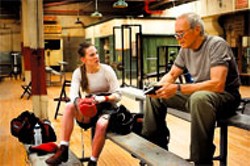 CONSTANTINE (2005). Based on the DC Comics/Vertigo series Hellblazer, this disappointment casts Keanu Reeves as John Constantine, a man who's always had the ability to recognize the angels and demons that walk the earth in human form. Yet as he goes about his business of wiping out as many of the demonic "half-breeds" as possible (in an attempt to "buy" his way into Heaven), he realizes that there's a seismic shift occurring in the underworld, and the only way he can get to the bottom of the mystery is to join forces with a police detective (Rachel Weisz) investigating the apparent suicide of her psychic twin sister. Script writers Kevin Brodbin and Frank Cappello, whose previous credits were vehicles for Steven Seagal (The Glimmer Man) and Hulk Hogan (Suburban Commando), respectively, have clearly bitten off more than they can chew without choking, as they attempt to incorporate religious and philosophical elements into the film's thriller framework. From the connotations of its hero's name (Constantine was the Roman emperor who endorsed Christianity more for personal gain than for any spiritual fulfillment) to depictions of Hell that borrow heavily from the works of Hieronymus Bosch, Constantine tries hard to include heady material that will allow for post-screening discussions around the water cooler or in cinephile trades (something Reeves' The Matrix accomplished masterfully with its rampant theology). But the movie never brings its debates into focus, choosing instead to pile on its issues like so many toppings on a baked potato. And because it's an exhaustive exercise keeping abreast of the story's seemingly haphazard developments, Constantine ends up resembling nothing so much as a punctured tire with a slow leak, letting all the air seep out until what's finally left is flat and fairly ineffectual. The only extras on the DVD are 18 minutes of additional scenes and the theatrical trailer. However, a two-disc deluxe edition is also available and includes additional extras and a collectible comic book.
Movie: **
Extras: *1/2

MILLION DOLLAR BABY (2004). The Academy got it right: Million Dollar Baby was the best picture of 2004, although Sideways came so close that I'd hate to live on the difference. Orson Welles once called Clint Eastwood the most underrated director in America, a designation that could be brushed aside once Eastwood received his due for Unforgiven. And now, presumably even the few remaining doubters of the legend's prowess behind the camera dissipated in the wake of his most recent triumph. Whereas Unforgiven, Eastwood's revisionist Western, deconstructed genre conventions, turning them inside out to expose the inherent contradictions and compromises, Baby leaves many of the cliches intact, deriving its power not by upending them but by burrowing so deeply that it feels like we're witnessing familiar sights for the first time. Eastwood (capping his career with his finest performance) stars as a gym owner who's urged by his only friend (Morgan Freeman) to train a young woman (Hilary Swank) determined to make it as a boxer. Yet what starts out as a familiar story (though brilliantly told) eventually changes course and emerges as a profound and moving experience. There's very little about this movie that feels extraneous - it's tight, taut storytelling, anchored by three astonishing performances and helmed by a man still able to teach Hollywood's young punks a thing or two. In addition to its Best Picture honor, the movie also earned Oscars for Eastwood (as director), Swank and Freeman, meaning almost nobody went home empty-handed that night. Warner Bros. has seen fit to issue the movie in different DVD versions: The most comprehensive is the three-disc deluxe edition: Disc 1 offers the movie and the theatrical trailer; Disc 2 features a joint interview with Eastwood, Swank and Freeman the day after the Oscars, a behind-the-scenes feature, and interviews with writer-producer Paul Haggis and coproducers Albert S. Ruddy and Tom Rosenberg; and Disc 3 is the soundtrack CD featuring Eastwood's sparse score for the film.
Movie: ****
Extras: ***

UNFAITHFULLY YOURS (1948). The most tantalizing of the extra features included on this Criterion DVD are the reproductions of the numerous memos written by Fox studio head Darryl F. Zanuck. It's a fascinating snapshot of how movies were made under the old studio system, when the man at the top was as involved as anyone in the production of a motion picture. In these typed letters to Unfaithfully Yours writer-director-producer Preston Sturges (who was coming off a string of box office hits), Zanuck's enthusiasm soon turns to anxiety, as he expresses concerns and even predicts that the film might prove to be a flop. Sturges' picture did indeed turn out to be a financial debacle for the studio, and what's interesting to note is that, while it's natural for film fans to want to see Sturges' vision preserved, it's also easy to empathize with Zanuck as he suggests specific - and, in some cases, sensible - cuts in an effort to recoup the studio's investment. Unfaithfully Yours is an uneven picture by Sturges' standards, a black comedy in which moments of pure comic brilliance are occasionally interrupted by lulls in the pacing. Rex Harrison plays Sir Alfred De Carter, a world-famous composer whose idiotic brother-in-law (Rudy Vallee) plants the suggestion that Sir Alfred's wife (Linda Darnell) is having an affair. As the evidence against the woman's innocence mounts, a jealous Sir Alfred plots the various ways in which he can exact his revenge, with the most elaborate scenario finding him killing her with a straight-razor and framing her lover (Kurt Kreuger). Yet once Sir Alfred tries to actually carry out his best-laid plans, things go disastrously wrong. In addition to its standing as a commercial bust (though its critical ranking continues to rise), this also suffered the indignity of a tepid 1984 remake starring Dudley Moore and Nastassja Kinski. Other DVD extras include audio commentary by three Sturges scholars, an introduction by former Monty Python member Terry Jones and an interview with Sturges' widow Sandy Sturges.
Movie: ***
Extras: **1/2

Tags: View from the Couch, film_hometheater.html