Voices From The 'Other Charlotte'

Where were you at 4 p.m. on Tuesday, September 20, 2016? Were you picking up your kids from middle school in south Charlotte? Were you in an Uptown office building making dinner plans with a colleague? Were you headed out to have a craft beer in NoDa?

Maybe you were inside your home at the Village at College Downs apartment complex. Did you hear the shots? Did you see the police?

Did you know Keith Lamont Scott?

Where were you by 8 p.m., after word had spread across the city that police had shot and killed Mr. Scott? Were you preparing dinner for your family in Matthews? Were you talking football with a friend at Tavern on the Tracks? Were you headed over to see Campdogzz at Snug Harbor?

Maybe you had scrawled "Black Lives Matter" on a sign and were making your way to the Village at College Downs apartment complex, where some 100 other people had begun to gather to express their anger, fear, frustration and rage. 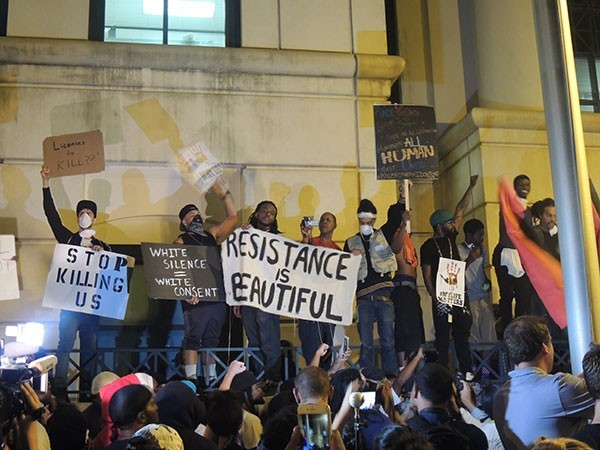 I was in my apartment in Richmond, California, across the bay from San Francisco, reading my social media feed, wanting to be closer to my friends back home in Charlotte.

One poignant comment from Facebook friend Quent Young, a Charlotte rapper, sent a chill up my spine: "I pick my son up every other day from that same street (Old Concord Road), feet away from where everything happened. I drop my son off every morning at school. So you mean to tell [me something] as simple as letting my son ride the bus and getting off work early to pick him up could lead to my death?"

And there was this, from OnQ Productions founder Quentin Talley: "I pray the strength of all my brothers and sisters in Charlotte today, especially those who work in corporate America. If you feel someone even look like they about to say something ignorant or bout to come sideways, whether you can sing or not, look them dead in the eye and at the top of your lungs just burst into 'Lift Every Voice and Sing' or 'What's Going On' or 'Formation' or '1960 What' or 'Say It Loud' or 'Mississippi Goddamn.'"

And this, from CL's Kia Moore, who wrote simply, "I just cannot watch the videos of my people being shot by the blood-stained hands of the people sworn to protect us. I will eventually watch them, but I just can't right now."

Where you were and what you were doing or thinking or writing or saying a year ago this week depends on what Charlotte you represent.

Are you satisfied with life? Are you happy-go-lucky? Are you blessed? Are you fortunate? Are you spritual but not religious? Are you concerned but don't like to get too involved?

Or are you the Other Charlotte?

In this week's cover story, news editor Ryan Pitkin talks to four women — Patrice Funderburg, Jasmine Hines, Linda Hill and amalia deloney — whose mission is to give voice to the Other Charlotte. The four have founded The Real Majority, which over the past few months has started filming commentary from 100 people of color living in marginalized communities throughout the city and who represent voices that are rarely heard on panel discussions or Facebook threads about life in post-Keith Lamont Scott Charlotte.

"We were all doing work in different areas and it was clear that there were communities that were impacted in different ways," deloney tells Pitkin in "Dispatches from the 'Other Charlotte,'" in this week's news section. "We come from the same communities and populations, but at the same time, because of our professional jobs, we're all in spaces all the time where those people who are impacted aren't in the decision making."

The commentary in the videos of people who are not "in the decision making" ranges from anger to, perhaps surprisingly, support for Charlotte police.

But mostly, it's frustration.

One young black man at a YMCA basketball court says he's seen no palpable change in his part of the city since the shooting. "It's still the same," he says. "White cops harassing us, me, black males, so nothing's changed."

A food vendor in west Charlotte says he's skeptical of change. "I would love to say more has changed," he says. "It sure the hell needs to. People don't have nothing, and it's getting worse. I hear a lot of, 'We're trying,' but I'm tired of try. We need do."

The Real Majority would like to turn the Titanic-sized imbalance of voices heard in Charlotte around so that the Other Charlotte's feelings and frustrations and perspectives and ideas are heard and taken seriously.

"Our root belief is that the power is with the people," Hines tells Pitkin. "But if the people don't have a platform for their voices to be heard, then it's always submerged by the predominant narrative."

Were you driving over to the Quail Hollow country club?

Were you being pulled over by police on Rozzelles Ferry Road?