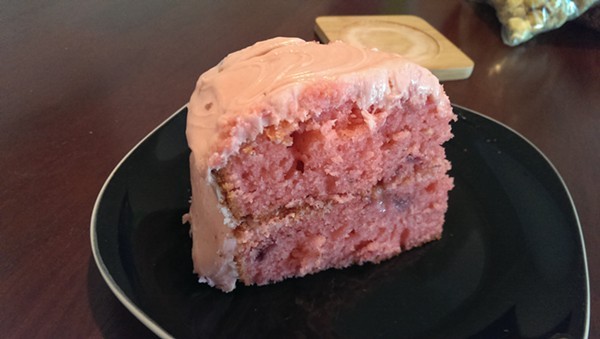 When you make a cake, you're not just making dessert. You're making a monument of sugar, flour and glory.

Sure, you've made batches of cookies or a few cupcakes before. And they were good, right? Delicious, even. Betty the old, crotchety neighbor down the street raved about them for weeks! People bought them in droves at the bake sale! You're gonna save town hall and have that parade after all!

But admit it. The minute someone puts one of your measly handfuls of frosting next to a towering, three-story-tall chocolate-coconut masterpiece, you just feel ... inferior. And it's not a matter of flavor, either. You know those cupcakes are good. You had five of them last night at 3 a.m. over a cup of coffee and a rousing game of "c'mon man, seriously don't call your ex this time." Of course they're good.

They're just not impressive. Not the way that cake is. A cookie is something you make because you're sad and you want something warm and chewy in the general vicinity of your mouth. A cake is a magnificent Machu Picchu made of fudge. Know the difference.

So, because it's been rainy and hot and gross as all hell this week, and I know you all probably feel like garbage, we're gonna make a big-ass cake. We're gonna make a Strawberry Cake. And we're all gonna feel glorious together.

First, preheat that oven of yours to 350.

Whisk together all the dry stuff, except for the sugar, in a small bowl. That's flour, salt and baking soda.

Beat the eggs in your stand mixer, (if you don't have a stand mixer, stop not having a stand mixer - they're magical) then add the oil, sugar, and gelatin. Mix the yogurt and milk together in a separate bowl until they're smooth, then add that in and stir the whole thing together.

You can just use a ½ cup of buttermilk instead of the yogurt and milk, but it's 2013. Unless you live on a farm or some weird tourist trap recreation of a farm, it's way more likely you have some yogurt lying around than a carton of buttermilk.

Add the dry stuff and mix it in until it's smooth. That means no lumps.

Push the berries into a sieve (that's a strainer for you people who start developing a nervous rash every time you see a French word) until you get a half cup of juice from them. If they're not cooperating, just warm them up for a couple seconds in the microwave and they should start giving up the good stuff.

Save the juice for later, and fold the berries into the batter.

Get yourself two 8-inch round cake pans and spray them with non-stick, or grease them with butter if you're a person who likes doing things the unnecessarily hard way. Sprinkle a bit of flour on the bottom and around the sides of the pans, then turn them upside down over the trash can and give them a couple of taps. You need some of the flour to make sure the cake doesn't stick to the pans, but you don't need a mouthful of powdery stuff either. Make sure you do the tap. 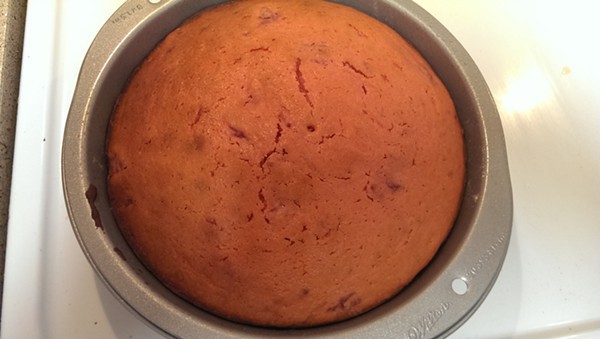 Throw the pans into the oven for about 30 minutes until they're golden brown. If you stick a toothpick in the middle and it comes out clean, you're in good shape.

When the cakes are completely cool (be patient now, my fellow fatties), start in on the frosting. This part's easy.

Mix the butter and sugar in your stand mixer. 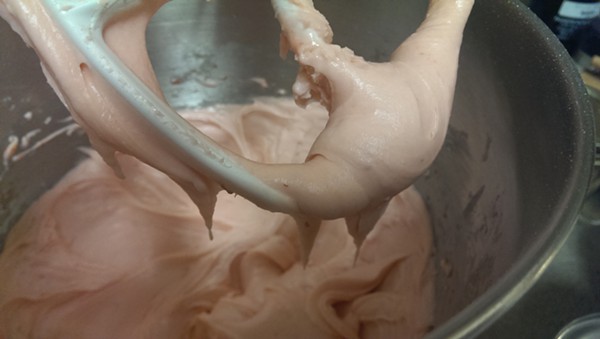 Add a 1/3 cup of the strawberry juice in and mix until frosting-y. If it's not a good consistency, add more. I ended up adding just short of the full 1/2 cup, but it might be different depending on your location/kitchen/personal beliefs/etc.

Take a serrated knife (trust me, unless your cake is made of raw beef tenderloin, it needs to be serrated) and cut off the tops of the cake.

Frost the first layer of the cake, stick the next layer on top, and frost that too. Easy.

Not as easy as picking out this week's beats, though. This one's been bumping in my brain for the last week in a half, and it's gonna be in yours just as long as that cake's in your mouth. Take a bite of "Genie in a Bottle (Buy the Lunch!)" from Grip Grand and DOOM:

This isn't just a pile of baked batter you have standing before you, readers. It's your castle. People don't just walk up and grab a piece, they have to approach it with reverence. They have to steel themselves in preparation for the sheer tastiness that's going to envelop their stomachs.

Now, doesn't that feel a lot better than just having a plate of oatmeal raisin cookies?