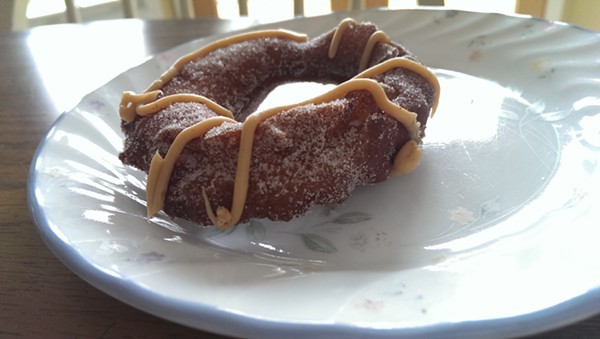 I'm not generally a fan of anything that gets plastered over a zillion billboards and TV ads, but I feel the need to defend this whole "pumpkin spice/apple" mania the country seems to go into every fall.

I like it because it IS fall, and fall tastes and smells goddamned amazing. And the other seasons have their things too, their iced teas and peppermint sticks and tables full of Grandma's hellaciously soggy "stuffing" that'd probably seep out of a turkey like a paper bag full of ice cream. But if you ask people what the definitive taste of winter or spring or summer is, it's going to be totally different depending on who you ask. Some people think of roasted chestnuts in the winter, while others think of the inviting smell of a half-empty bottle of Wild Turkey and a freshly-loaded handgun. To each his own.

Say "fall," on the other hand, and you get the same answers from everyone: pumpkin spice, apple cider. Every. Damn. Time. And there's a reason for that: THEY'RE DELICIOUS.

Like I said, I'm not super into obsessing over anything too much. But the way I see it, this whole fall thing isn't obsessing, it's just giving people what they already know they want. And I want some Apple Cider Donuts with Peanut Butter Frosting.

Donuts:
- 1 cup apple cider
- 2 3/4 cups cake flour
- 1 teaspoon baking powder
- 1 teaspoon salt
- 1/4 teaspoon freshly grated nutmeg
- 2/3 cup sugar
- 2 tablespoons non-hydrogenated shortening (if you have lard, use it. I save the drippings from bacon to use as lard, and sweet jesus does it make these donuts amazing)
- 1 egg plus one egg yolk
- 1/3 cup buttermilk
- Canola oil (it's for frying the donuts, so get a lot of it)

You're going to need to chill the dough a bit ahead of time, so fair warning: start this earlier than you want to eat it. Like a day earlier, if you can help it.

Take your apple cider and boil it until it's down to 1/3 cup, then take it off heat. Make sure you keep an eye on it too; otherwise you'll let it boil too long and end up with roughly a tablespoon of apple-goo instead of syrupy apple goodness.

While that's boiling, whisk the flour, nutmeg, baking powder and salt in a medium bowl.

Cream the lard/shortening and sugar together, then add in the eggs and mix for about 5 minutes on high.

Once the cider's cool, mix the buttermilk with it.

Alternate between adding the dry stuff and the cider/buttermilk to the sugar/shortening mixture until it's all combined and doughy. The original recipe says your dough should come out looking like cookie dough. That recipe is a liar. It'll look like regular dough, because that's what it freaking is.

Put your dough in a bowl, cover it with plastic wrap, and leave it for anywhere from an hour or overnight. If you can, do it overnight because, as you'll see, this dough is a BITCH. 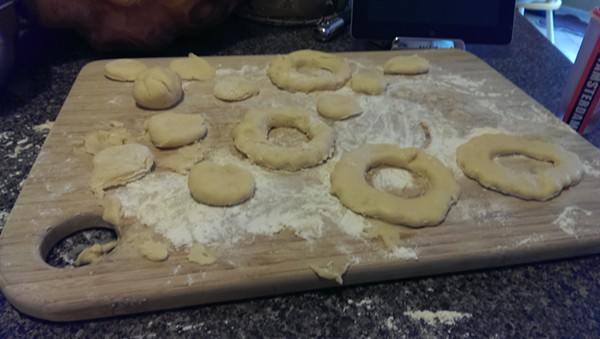 So... that dough. Make sure you put a ton of flour down on your working surface. A TON. The dough's going to get sticky no matter what, so just do the best you can and work as quickly as you can to roll it down to 1/2 thick.

Get a round cookie cutter and keep cutting and re-rolling until you've used up the dough as much as you can. Make sure you cut out some donut holes too, otherwise you'll just have stupid round wads of dough instead of donuts. I used a shot glass to do it, but anything roughly that size will work.

Let the cut donuts chill in the fridge for 15 minutes, and mix together your cinnamon and sugar while they're cooling off.

Now's the time to make your frosting, too. Cream together the cream cheese and powdered sugar (and do it SLOWLY, otherwise you'll end up with a face full of sugar, and not in a good way), then add the peanut butter and salt and mix those in as well. Mix in the vanilla last, and you're good to go.

Once the oil's close to 370 (you're not going to get it exact, just trust me on this) and the donuts are chilled, start putting the donuts and donut holes in, making sure you don't crowd up the pot too much. You want them to fry for a minute on each side, just enough to get them nice and golden brown.

After each batch is done, put them on a plate with paper towels and pat the tops with another paper towel to get rid of some of the oil. Immediately toss them in the cinnamon sugar and pray you don't burn the everloving shit out of your hands like I totally didn't do, then put them on a cooling rack.

Now comes the dilemma. You're going to want to eat some of these hot and fresh, and you totally should. But if you want the frosting to stay unmelted, you're gonna have to let the things cool down a bit. I know, I know ... life's hard.

Use a small, round tip to frost the donuts like the picture up there, and you're good to go.

I promise I didn't pick this week's song because it sounds like "peanut butter" at the beginning, but that helped. It's the Wu-Tang Clan with Gun Will Go:

Sure, maybe this whole thing is all a big marketing ploy, but you know what? I don't care. If some suited-up Patrick Bateman types got together in a boardroom and conspired to make my mouth taste like cloves and cinnamon, let them. I'll sip on that cynicism all day, haters.

PS- Here's the recipe I lovingly borrowed from.