When the Art Institute of Charlotte hosts a Locally Twisted Dinner on Dec. 4, beef-tongue ravioli will not be the most unusual aspect of the evening. That's because, unlike most foodie fundraisers, this dinner does not boast a team of well-known local chefs. Instead, everything about the event — from original recipes and hand-crafted drinks, to the logo and restaurant décor — comes from the efforts of five students enrolled in the culinary program's Senior Practicum.

Diverging from typical cooking courses where chef instructors determine menus and hand out recipes, the practicum hands the reins to students about to enter the culinary workforce. "We have a chef instructor, but pretty much all the ideas and concepts have come from the students," says senior Kristen Beasley, who spoke to me as the event's marketing manager. "Instead of class lectures, we have meetings about how to [run] the restaurant."

The folks at Olde Mecklenburg Brewery have been making moves to set themselves apart recently, and are now calling on Charlotteans to help them do that on a national level. What they’re asking for is simple, but it could have pretty long-lasting effects.

Currently, OMB is ranked by USA Today and 10Best Readers’ Choice Awards as having the No. 1 brewery tour in the country, but that could change if the city falls asleep at the tap. OMB has been neck and neck with Magic Hat Brewing Co. from Burlington, Vermont, and is the only brewery from the Southeast that made the list. Major breweries such as New Belgium, Samuel Adams, Sierra Nevada, Stone, and Dogfish Head are all trailing.

Ryan Self, director of sales, hopes that Charlotteans will continue to vote to keep them at the top of the list. “We think if we can get Charlotte behind us, we can win this,” Self said in an interview with the Charlotte Business Journal.

OMB offers an experience unique from its competition in the fact that it adheres to a very strict German Beer Purity Law — The “Reinheitsgebot.” No inferior ingredients are allowed in their production process. Barley, hops, water and yeast. That’s it.

Readers can cast their vote for OMB until the ballot closes on Dec. 1 at noon.

Down and Dirty In which a northerner works to understand greens

One of the worst moments of my childhood was the day some horrible person told my parents that beet leaves were edible. Spinach was bad enough, but now there were two kinds of nasty green bitterness they could torture me with.

Obviously, I am not a greens lover, and perhaps as obviously, my parents are not Southerners. Otherwise they would have known that "greens" is a multitudinous category of plant matter. This fall, as they multiply in the market, I turned to Dani Rowland of Rowland's Row Family Farm in Goldsboro to educate me.

When I stopped at her stall in Atherton Market to ask how many types she and husband Joe grow for market, the sprite-like young farmer needed some time and all her fingers to count. The list finished at 11, including three kinds of kale, and cabbage as a possible contender. Yes, beet greens and spinach were on the list, along with collards, turnips, rutabagas, mustard and bok choi. 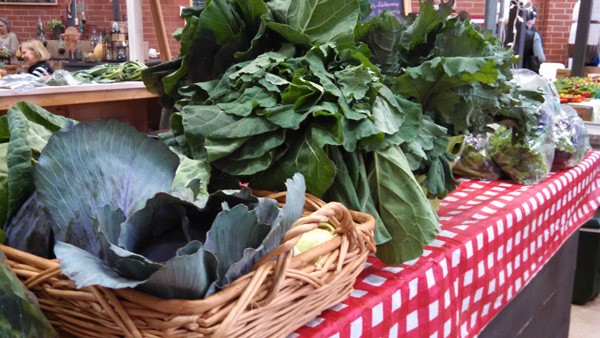 Keia Is Hungry Eat This: Porchetta at Little Spoon Eatery

If you didn’t already know this about me, I’m a proud supporter of swine consumption. I like pig in all of its delicious iterations, and I’ve never met a meat sweat I didn’t like. To be fair, I’m an equal opportunity carnivore, and when I walked into Little Spoon, the Selwyn Avenue breakfast and lunch eatery open since late July, I was looking for a different dish. Thanks to a chance run-in with one of my most trusted food advisors, I was swayed by the siren call of pork when she ordered the porchetta ($11).

Beer A recap of one of Charlotte Beer's biggest weekends

I’m not particularly known for hyperbole. When I say that last weekend was one of the biggest for Charlotte Beer, I mean it.

• Ladies and gentlemen, we have a new local brewery. In case you somehow missed out on its Saturday afternoon grand opening shindig, Sycamore Brewery has opened its doors in South End, at 2161 Hawkins St. to be precise. The owners invited thousands of their closest friends in the Charlotte beer community to celebrate, with five in-house beers flowing at their inside bar and at outside taps set up for the event. Conveniently, they’re just up the street from Lenny Boy Brewing, making this street a one-stop good afternoon.