From food to artwork, the theme at Nan and Byron's, opening this week, is classic Americana. The rustic American eatery will boast a bountiful selection of craft cocktails, with the help of bourbon, moonshine and corn and rye whiskey made in the USA. With a unique selection of 15 cocktails, the Nightshade is just one of two martinis on the list that are vodka-based. That being said, the dark-hued martini is expected to be its most coveted sip. Though the pomegranate flavor may lead you to think of summer, this delectable cocktail transcends any season with an enticing, well-rounded flavor that you'll want to drink all year long.

"Everyone can, and will, drink it," says beverage manager Mark Childers. "The deep color and the large, fresh garnishes will be appealing to men and women alike. Ladies will love the fruit-forward freshness, and gentlemen will be pleased that it isn't nearly as sweet as they thought. It's definitely a cocktail for the co-eds."

Update (Oct. 10, 5:24 p.m.): Well, I guess I shouldn't have gotten so excited at the prospect of seeing a huge-ass rocket in the neighborhood. Just got word from the folks at Soul that the Ardbeg folks have postponed their appearance to November.

Oh, so many ways to use the phrase "out of this world" come to mind as I start to write this post ...

The folks with Ardbeg - a single malt Scotch whisky, for those of you who just toss glasses back without a second glance at the label - will be at Soul Gastrolounge Thursday evening for a Scotch tasting. Soul - who won Best Spot for Bar Bites and a Creative Cocktail List in our Best of Charlotte issue - has just released its fall cocktail menu, and its selections look tasty. 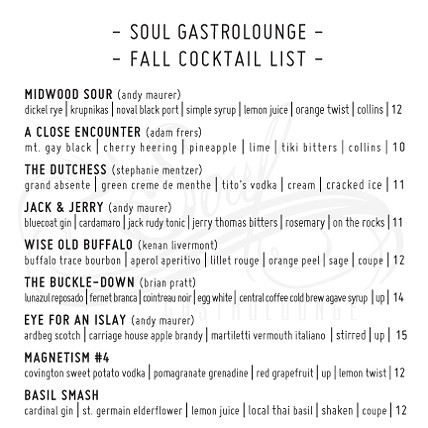 Liquid Diet When getting canned is a good thing

Last week, NoDa Brewing Co. unveiled a new package for its popular Hop Drop 'N' Roll IPA and Jam Session Pale Ale: cans. The move is a first amongst Charlotte breweries. "Canning/packaging beer allows us to expand our brand to more diverse markets where kegs may not be available," says Brian Mister, NoDa's director of community optimism. "This is also a much more portable product, allowing people to bring NoDa along with them in their active lifestyle."

When NoDa's owners looked at options for entering the world of portable packaging, canning made the most sense because it shields the beer from light, which can affect the beer in a number of ways, including taste. The vibrant design of the cans is courtesy of local brand management company Saturday.

The 16-ounce cans will be available in NoDa's taproom in mid-October, and soon after in Panthers Stadium, bottle shops and other places. "By the end of 2013, we should be into the market pretty heavily," Mister says.

The next beer slated to be canned is NoDa's award-winning porter Coco Loco.

Some people like their wine dark and robust. Others prefer it light and fruity. Some like a sip or two with dinner, while others have a bit of dinner with their wine.

Me, personally? If I could take a cab to work, I'd have a glass in the morning to start my day.

Either way, wine is an integral part of the lives of many Charlotteans. Lucky for us, three upcoming wine tastings have something for everyone.

The EpiCentre will be playing host to Sip and Stroll, a two-day event set to kick off Friday, Sept. 13 and continue on Saturday, Sept. 14. More than 20 wine selections from brands like The Naked Grape, Tres Agaves and Angry Orchard Hard Cider will be featured during the event. Local and national artists will also be performing live demonstrations both days. Tickets are $25 or $40 for both day. More information can be found at www.sipandstrollcharlotte.com.‎

The next wine tasting to add to your calendar is Sip and Savour Gallery Crawl, held Sept. 21 with registration beginning at Allison Sprock Fine Art Gallery at 6 p.m. Providence Gallery, Mccoll Fine Art Gallery and Shain Gallery are the next three stops for eager wine tasters. Proceeds will benefit Melissa's Voice to raise money for individuals struggling with eating disorders. Samplings from shops such as The Wooden Vine, Bond Street Wines, Petite Philippe and more will be featured at the galleries. Live music will be at every gallery along the route as well as all of the amazing artwork on display. Tickets are $25.

If you prefer a more laid-back atmosphere to enjoy a day of wine sampling, Great Grapes is a one-day event that features only select North Carolina vineyards and wineries. Great Grapes will be held at Symphony Park in Southpark on Oct. 5 from 11 a.m. to 7 p.m. With more than 220 wines to be sampled this day, a designated driver will be surely needed in every carload. Wineries such as Bottoms Up, Carolina Heritage, Slightly Askew and Southern Charm will be featured. Live music includes the tunes of Celtic rock band Uncle Hamish and the Hooligans. Adult admission is $25 in advance ($30 on site) and comes with your very own souvenir wine glass and unlimited samples and performances. 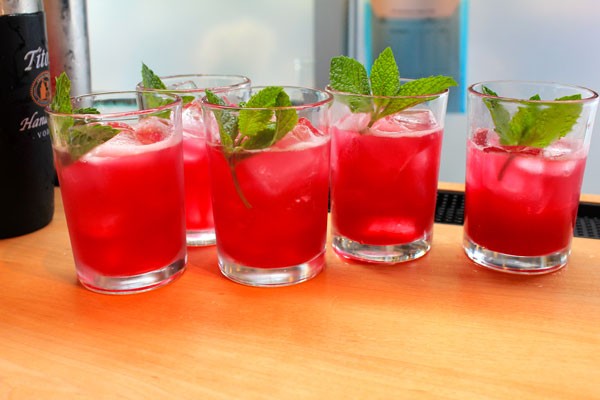 Block and Grinder boasts a farm-to-table concept focusing on seasonal, artisanal ingredients both in the kitchen and behind the bar. Beverage director Kyle Crabtree perfected the art of the craft cocktail while working at upscale eateries and bars like Soul Gastrolounge (where he worked as an opening consultant). He works to create balanced concoctions inspired by fine cuisine, using fresh herbs, quality liquors and hard-to-find essentials, such as Scrappy's aromatic, handcrafted bitters. "I'm a big fan of nouveau cocktails, but I like to give respect to the classics," Crabtree says. "They're classic for a reason."

Recently, Crabtree turned the craftsmanship over to home mixologists when Block and Grinder held its Summer Sip-Off contest, encouraging enthusiasts to submit original cocktail recipes to showcase in front of a panel of judges. Emily Pederson, whose husband also submitted his own cocktail recipe, created the aptly named sweet and sour cocktail Veruca Salt. The winning drink claimed a spot on the Block and Grinder cocktail list. 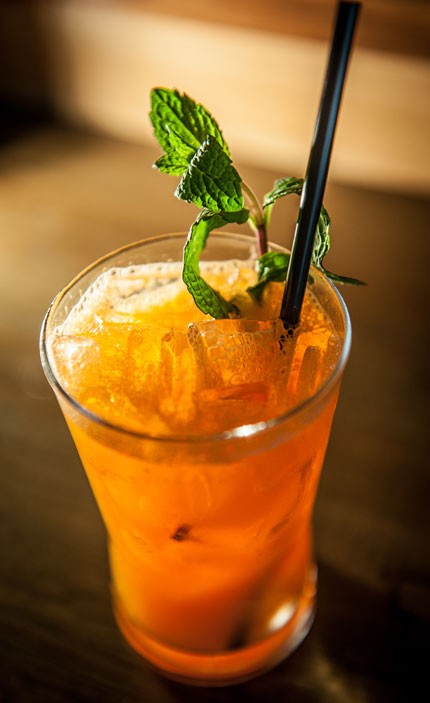 Like most of e2's cocktails, the What's Up Doc was born out of the desire for a challenge. "The reason why it came about was because we had a few regulars challenge us that we couldn't make a drink with just anything," says bar manager Miki Nikolic. "'How about carrot?' they said. The next thing you know, they're sipping on this one."

Nikolic thrives off of challenging cautious, finicky drinkers to enjoy their "least favorite liquors." If you claim you're not a bourbon drinker, you'll soon be sipping on Wild Turkey under the impression that it's anything but whiskey. Later, he'll fill you in, at which point, you won't even mind. You'll be converted.
Nikolic, an old-school bartender, isn't a fan of new titles and crazes in the industry, and hates the word mixologist. Still, he's crafty when it comes to creating drinks at the fresh-forward bar at e2. His sought-after recipes are simple in execution, and Nikolic lives by a five-minute time limit for cocktail crafting. The Serbian legend is brimming with stories spanning international locales and the kitchens of famous chefs, and you'll most likely hear about them. He knows the recipe for a good bartender requires equal parts craftsmanship and conversation.

The folks at NoDa Brewing Company are so cool.

Today's NoDable series release is SIPA, a social IPA. Social in the sense that they joined other breweries around the world to brew this beer on the same day, the process of which was broadcast live on Google+.

They're so fancy, huh.

So basically, if you go to NoDa Brewing tonight and try the NoDable release, you're sipping on a SIPA that's been internationally sipped. 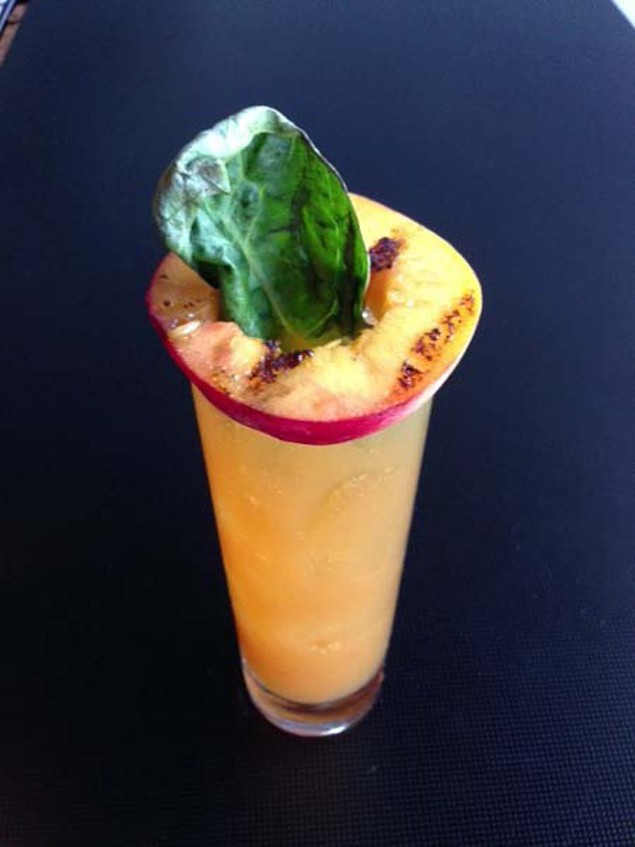 If you thought the summer of '69 were the best days of your life, the soundtrack to your summer is about to change. "Generations to come will refer back to this one as the summer of carbonation," Pisces bartender Bob Peters jokes. He recently started experimenting with bubbles and the outcome is delightfully effervescent.

Pisces is, to our knowledge, one of the first joints in town to don and use a carbonator system. The geek chic cocktail device churns out some of the best summer sips you can imagine, with a little sparkle to excite the palette. From what started as something Peters found "fascinating, terribly interesting and fun," is now available for the taking in a highball glass at Pisces. The Carolina Peach is the epitome of a poolside sip and is almost too easy going down.

"I think it screams summertime. It screams summer drink, summer cocktail. I'm not sure how it's going to work in the winter but I'll figure something out," Peters added.

Come opening hours, even on weekdays, NoDa Brewing's tap room (located at 2229 N. Davidson St.) quickly fills up with locals and beverage connoisseurs alike who are enamored by the company's unique and ever-evolving craft brew lineup. However, a seasonal brew of the company has recently elevated itself beyond the pale ale, selling out almost immediately and inciting a thirsty demand unforeseen by even the company's owners.

That brew is the NoDajito - a witbier flavored by lime and spearmint echoing the refreshing summer staple of a mojito. Light, slightly sweet and crisp in palette, the selection is an almost perfect companion to warmer weather - if it could only stay on shelves and be readily available, then perhaps it could be a paragon. 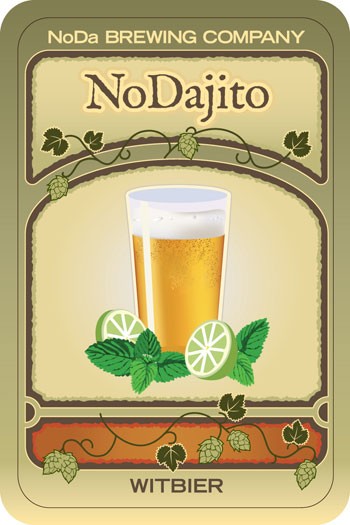 "We created it last year, and we were just going to do it at one or two festivals, but it was so popular that we decided to do it on the big system," said brewery owner Suzie Ford. "It definitely will be our summertime beer, and we use it to kick off the festivals that start in April and May."

Since its opening just over a year ago, 5Church has wooed locals and out-of-town celebs alike with a well-curated menu prepared by Chef Jamie Lynch. But it's more than just the wasabi-crusted salmon and renowned lamb burger that brings diners back for more. The buzzing bar entices with small plates and the promise of elbow-rubbing with the who's who of Charlotte and beyond. Thus, the cocktail is key.

5Church manager and head mixologist Mark Childers says he "likes to take a newer look at older cocktails." Describing himself as a classic traditionalist, Childers creates old-school cocktails with a modern twist. For instance, "The Wild Berry Mojito is a spin on the traditional mojito," he says. "It just takes it to the next level. For the summer months coming up, there's nothing better than a fruity mojito ... combining the freshness of the mint with the fresh fruit makes for an amazing dance on the palate."