Just in time for Easter, two religious epics about the son of God.

The 1960s witnessed battling Jesuses on the nation's screens, as 1961's King of Kings was followed four years later by The Greatest Story Ever Told. King won the box office battle (it earned slightly more and cost much less) while Story could claim Oscar bragging rights (five technical nominations versus King's shutout), but which film is actually better? My vote goes to the first one out the gate. 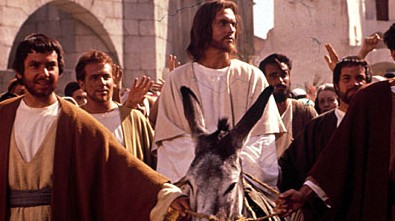 Because the makers of King of Kings took a chance by casting heartthrob Jeffrey Hunter as Christ, this was quickly dubbed by industry wags I Was a Teenage Jesus (a play, of course, on the era's I Was a Teenage Werewolf and I Was a Teenage Frankenstein). But the film is far better than that label would suggest, even if Hunter, for all his sincerity, is a bit too bland in the pivotal role. What's more, Philip Yordan's screenplay and the unfussy direction by Nicholas Ray (Rebel Without a Cause) allow the film to sometimes tread off the beaten path of the other religious epics of yesteryear. Gone are many of the standard scenes (e.g. the moneychangers in the temple); in their place is more of an emphasis on the politics of the Roman court, as well as a running contrast between Christ's attempts to free Jewish souls and Barrabas' (Harry Guardino) efforts to liberate the Jewish flesh. Miklos Rozsa's score is outstanding and, with the possible exception of Peter Gabriel's work on The Last Temptation of Christ, the best ever created for a Biblical epic.

Director George Stevens (Giant) certainly knows his way around an awe-inspiring shot, and some well-staged sequences are primarily what The Greatest Story Ever Told has going for it. But the film is largely hampered by the poor all-star casting: Max von Sydow, who can normally act circles around Jeffrey Hunter, is too pious as the Messiah — his lack of animation is better suited to a fresco than a movie — and, on the other end of the spectrum, hammy performances are hand-delivered by Charlton Heston as John the Baptist, Telly Savalas as Pilate, and, in the most notorious bit of casting, John Wayne(!) as a Roman soldier overseeing the crucifixion ("Truly, this man was the son of God," drawls the Duke).

Blu-ray extras on King of Kings consist of two vintage newsreels — one about the film's location shooting near Madrid, Spain, the other on the picture's East and West Coast premieres — and the theatrical trailer. Blu-ray extras on The Greatest Story Ever Told consist of two vintage behind-the-scenes featurettes; one deleted scene; and the theatrical trailer.

(For reviews of more new Blu-ray releases, check out this week’s View From The Couch column at www.clclt.com/film.)