Opening the door to Jerald Melberg Gallery’s new solo show of paintings by Brian Rutenberg is much like stepping into Dorothy’s shoes as she opens the door to a Technicolor Oz. Color is everywhere, thanks to a new exhibition titled River. These intensely hued abstract works hint at landscape, though any such illusion is overshadowed by the painter’s craft: panes of color, heaping brushstrokes, swipes of the finger, and the weave of linen beneath, which sometimes sneaks to the surface.

Rutenberg was born along the South Carolina coast and inspired by its natural beauty to paint from an early age. He remembers absorbing the colors of blooming azaleas by sinking his face into them; learning the power of rhythm through the ceaseless lull of crashing waves; and experiencing texture by way of pluff mud, which he sank his hands into, gathering piles to make mounds and cakes.

Rutenberg went on to receive his BFA from the College of Charleston and subsequently study at New York’s School of Visual Art. He's a voracious student of art from all ages, and even a short conversation with him is flooded with laudable references to past artists, whom he treats as revered ancestors. He admits, “I like taking older things, things that have been proven, things that have been worked and lamented over for centuries, and using those. That’s my right as a painter.” In a short conversation, he mentioned Tiepolo’s illusionistic, swirling frescoes, the treatment of spacial depth among the Canadian Seven, and Hans Hofmann’s mastering of light.

Perhaps gleaned from the intense study of these artists, a theme resonating in every work of the show is Rutenberg’s dedication to the exploration of oil paint, which he toys with in a respectfully experimental way. Paint is layered upon itself in different colors, building out toward the audience in thick slabs. Small peaks of it remain where a brush removed itself from a swath of color, prickling out at the viewer, or otherwise lazily lopping atop itself. The texture of the paint is comforting because it is evidence that the work was made by specific human hands, lending it a true identity.

Rutenberg is, at his core, a landscapist, though he's much more concerned with its conceptual definition. He aims to share the experience of a place over reliving it, which he achieves through raw color and composition. He believes a painting is a river between two lands, connecting the space where the painting was created and where the viewer eventually sees it. In most every work, Rutenberg has literally depicted this idea, with forests bisected by this connective river.

The largest painting in the exhibition, fittingly titled "River," shows an abstracted landscape of tightly packed tree trunks in a parade of colors. As the eye trains from an edge to the center, the building up of oil paint and layering of hues becomes more intense until it abruptly reaches a middle section of smoothed and glazed hues, which immediately snatch the viewer's gaze. This composition is echoed through the show, as with the cool colors of "Gray Thunder," or with the blaring "Red River." 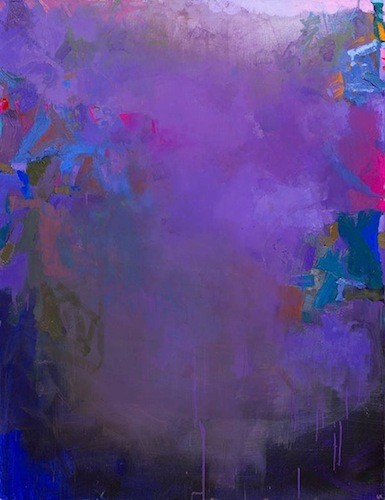 The show has two seemingly anomalistic paintings, vertical canvases named "Late Pond" and "Late Pond 2," which stray from the forest and river composition. The portrait orientation suggests a doorway or window for the audience, whose gaze is strongly pulled toward a light-filled center. Rutenberg describes them as “swirling vortexes of color,” and their kinetic quality is undeniable, each with a collection of movement around the edges. Rutenberg admits his intended feeling of disorientation, “are you looking through or up or down?” They are reminiscent of a flashlight shining through murky water, or a searchlight through morning fog.

The thread that runs through every work in the show is the rainbow of color. Rutenberg is a child of the brightly (and synthetically) colorful Myrtle Beach, chock full of mini golf courses, theme parks and neon lights. This “prismatic sparkling color,” though predominantly artificial, built a strong color foundation for the artist. He has a remarkable and passionate way with color, handling it effusively, never sparingly, and speaking of it with casual reverence, like an old mentor. He gestures his hands like a potter when talking about it, suggesting the malleability of it, the manipulability of it. Great love and respect for paint and color are the open arms his paintings present; he allows his audience to sink into his paintings and experience them like he did the azalea bushes and pluff mud of his youth.