Seeing a show as distinctively original as The Lion King with fresh eyes the third time around can be a little daunting for a critic who wishes to give the wonder of Julie Taymor's staging adequate weight. So I did a couple of things to pep up the experience that worked well for me: I brought a child with me, and I watched another critic. 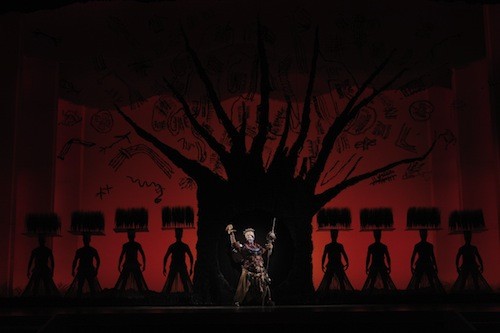 Actually, the grandchild's parents also clamored to join me and Grandma, so it was near-miraculous that Blumenthal Performing Arts could come up with three unsold seats so near to mine on such short notice. We were seated well in advance of the famous lockdown at the beginning of the show, when the magnificent puppet animals parade down the aisles, summoned by Rafiki's stirring shamanistic chant of "Nants' Ingonyama."

There's a lot to take in during the procession, whether it's onstage, on the aisles, or up in the boxes, where there are percussion perches on both sides of the proscenium. On the other hand, Rafiki isn't working her mojo in English, making it easy to split my attention. No need for apologies really, since the wonderment of the children at Belk Theater is one of the things that makes The Lion King so unforgettable. The glow on little Leah's face was certainly sparked by the charm and grace of the individual creatures - the cheetah was her absolute favorite - but also by the pulsating superabundance of it all.

Her enthusiasm was all the reminder I needed to savor the spectacle from my prime aisle seat. Mine is not a terrible job at moments like these. You have to look way up to take in the tallest creatures, but it was when I looked down momentarily during the parade that I chanced to see Charlotte Observer critic Larry Toppman across the aisle. He was gazing upward at the most imposing beast on parade with an undisguised awe, wonder, and delight that gladdened my heart. Turns out, as he confessed in his review, that he was a first-timer nearly 16 years after the original Broadway opening.

He picked a fine touring edition for his initiation. Tshidi Manye is the best Rafiki we've had here, earning her laurels when the griot is called upon to emit the exotic clicking sounds that are part of the expanded palette of the Bantu languages. They explode from her deliciously like popcorn. Chemistry between Jelani Remy as the adult Simba and Nia Holloway as the adult Nala is magnetic enough to give parents second thoughts about bringing the kids along - again, the best we've had. Yet there is no mistaking the warmth between Jordan A. Hall as Young Simba, the future king (the adorable Hall timeshares the role with Nathaniel Mcintyre), and L. Steven Taylor as his royal father, King Mufasa.

All the comical critters are also top drawer, beginning with Andrew Gorell as Zasu, the craven and flutteringly officious dodo who loyally serves whoever happens to be king. As the meerkat-warthog comedy duo who serve as Simba's foster parents while the child is in exile, Nick Cordileone is wiry and chattery as Timon, while Ben Lipitz applies a robust Brooklynese to the wind-breaking vulgarity of Pumbaa.

But of course it's the evil Scar who drives the plot, usurping his brother's throne by murdering Mufasa, convincing his nephew that he is guilty, and casting Simba into the wilderness to die. With its electronically driven head, Scar's costume is also my high-tech fave. Toting a cane as he descends the circular stairs that lead to the royal peak of the lions' territory, the bedraggled Patrick R. Brown looks like cross between a tiger and a Sumurai warrior. He is the most cunning and crazy malignancy we've had here, adding an electricity we haven't seen before in the early action, but he really seems to need that cane, so Brown's performance in the climactic Act 2 action scenes is notably lackluster.

On my third time around, some of the less striking elements of the production struck me afresh. The salient storyline, often remarked upon, has Prince Simba following in Prince Hamlet's footsteps, but there are fainter, more ancient echoes along the way. When Mufasa points up to the skies or looks out over the landscape that Simba will inherit, you might find your thoughts drifting to the biblical Abraham or a key moment in the epic Roots TV saga. In that seemingly lightweight interlude where Young Simba sings "I Just Can't Wait to Be King," there's a splash of the biblical Joseph in the boy's conceited exuberance - underscored by scenic designer Richard Hudson's sheer technicolor breakaway from his prevailing mix of savannah earth tones and tropical colors.

Or how about those moments in Act 2 where Nala goads Simba out of his lazy retirement to come to the aid of his beleaguered kinsfolk? It's a theme that has been around since The Iliad was first sung millennia ago, when Achilles sat sulking on the fields of Troy and Odysseus tried to coax him back into battle. Yes, there is a richness of reference in The Lion King that complements the richness of the spectacle and rewards repeated viewings. But the first time is still the best.