In the early days of television, Gypsy Rose Lee was a "personality." She was the sort of artist/performer who appeared exclusively on late-night talk shows or Hollywood Squares - like Polly Bergen, Peggy Cass, Orson Bean, or Oscar Levant - for reasons only my elders could fathom. Even among this talky coterie, Lee stood apart, for while the others merely chattered away, encounters with the famed ecdysiast inevitably turned to her colorful past. 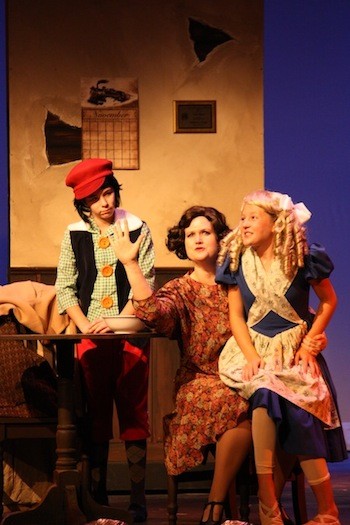 Burlesque was already dead and buried, and even if television had been grown-up enough to show all of Elvis performing fully clothed, there were no YouTube or movie clips to spice up the conversation. So the legendary striptease devolved into a coy, irritating talk-tease during my growing years.

Then along came Gypsy in 1959, a brassy Broadway musical based on Lee's memoirs with a Jule Styne-Stephen Sondheim songbook starring Ethel Merman, for better or worse the brassiest musical stage-and-screen star of all time. Huh? Merman was three years older than the title character - and considerably less attractive on her best day.

But it all sorted out. Merman was actually starring as Lee's mom, and the showbiz songs that she sang, particularly "Rose's Turn" and "Everything's Coming Up Roses," fit her like a glove. When the movie came out in 1962, the beauteous Natalie Wood had the title role opposite a termagant Rosalind Russell, giving me a faint idea of the artistry that had been generated in the theater.

Merman notwithstanding, the real cultural earthquake unleashed by Gypsy was the children's novelty song that sisters Baby June and Baby Louise sing at the start of the show in a vaudeville act under Mama Rose's tutelage, "May We Entertain You." When we reach the turning point of Act 2, June has eloped, vaudeville has died, and Mama Rose is so desperate that she's ready to violate her own ban against Louise degrading herself and performing burlesque.

In a moment that echoes the great renaming episodes of scripture and myth from Abraham down to Robin Hood and Batman, Louise becomes Gypsy Rose Lee in the space of a wardrobe change. Doubling down on that old mythic transformation - this is Broadway, folks! - the sheet music for that old children's novelty song is still in the family's traveling trunk, suddenly resurrected as "Let Me Entertain You," the ultimate bump-and-grind anthem.

So from 1959 onwards, Eisenhower Era or not, you didn't have to buy orchestra seats for this new hit musical to get a whiff of what burlesque had once been. All you needed to do was turn on a TV set, where one temptress after another sang "Let Me Entertain You" on the variety shows. And the first time I heard that zesty little greeting interpolated, "My name is Gypsy Rose Lee; what's yours?" I finally got what she was all about.

Of course, if the song is done right, Louise becomes Gypsy while she's singing it. But all the rightful praise heaped upon Merman's performance and the rich complexity of Mama Rose's character has tended to devalue the importance of this bold affirmation. This is not only a woman seizing her independence. It's a woman discovering her sexuality and reveling in its empowerment.

That aspect of Gypsy has finally arrived in town with the current Theatre Charlotte production directed - and costumed - by Jamey Varnadore. After decrying the use of body suits in a production down in Fort Mill, I had to despair when the same dodge was applied in a subsequent production at Theatre Charlotte in 1997. The 2005 effort at CPCC Summer Theatre was hardly less disappointing. So Varnadore's costume designs here should not be dismissed as a factor in finally getting this musical right.

In the climactic "Strip Routine" built around Gypsy's anthem, successive Varnadore striptease outfits nicely complement Lisa Blanton's choreography. You'll get the idea without having to worry whether the cops are around the corner.

More importantly, Cassandra Howley Wood puts her body and soul into Gypsy's sudden transformation, making the denouement powerful, alluring, and even moving. The whole arc of Louise's development is beautifully drawn, but you can rest assured that she doesn't upstage Lisa Smith Bradley's turn as Mama Rose. Sixteen years ago opposite KatiBelle Collins, Bradley was Louise at Theatre Charlotte, a singer becoming an actress as she tackled the younger role. When she does "Rose's Turn" now, it's easy to declare that Bradley is fully formed, with depths to dig into.

Though ably conducted by music director Zachary Tarlton, the orchestrations for septet sometimes struck me as anemic, particularly the overtures. Aside from the scallop-shell footlights, emblematic of the Jazz Age and the Great Depression, Gordon W. Olson's set designs look underfunded rather than atmospherically seedy. Fortunately, the corner-cutting on the orchestrations and set budget doesn't carry over to the casting, which continues to be as strong as any you'll see for locally produced musicals.

Carlyn Head is a genuine scene-stealer as Baby June, paired with Jessie Sherman as Baby Louise, so we're not impatient for the siblings to reach puberty, and Emma VanDeVelde commands the stage sufficiently as the elder June for Wood to yield the stage to her. The Newsboys and Farmboys who back up their lame vaudeville acts are all topnotch, and its good to see a shred of credibility in the elder strippers of the "Gotta Get a Gimmick" trio after the travesty of 1997, with Allison Snow Rhinehart as the slatternly Tessie Tura, Emily Hunter as Electra, and Veda Covington bumping the trumpet as Mazeppa.

After seeing him as a leading man in Pajama Game this past summer up in Davidson, it was a little disconcerting to see Bill Caswell as Rose's agent boyfriend Herbie, whose woebegone shambling template was long ago established by Jack Klugman and Karl Malden. But the longer his smile shone on Rose through thick and thin, the righter he seemed. When he, Bradley, and Wood sang their "Together" trio, I felt a twinge that signaled my heart opening to the possibility they could actually become a family.

That's the kind of energy and chemistry that pervades this Gypsy at the Queens Road barn.