I'd assume that it wasn't an unprecedented phenomenon, but I can't remember the last time I saw two different shows directed by the same person at two different theaters on the same weekend. It happened because I was playing catch-up after sneaking off to New York to see my mom, daughter, grandson, sister, and a baker's dozen of shows. So I caught up with CPCC Theatre's final weekend of Some Enchanted Evening and one of the opening performances of Children's Theatre of Charlotte's Petite Rouge: A Cajun Red Riding Hood. 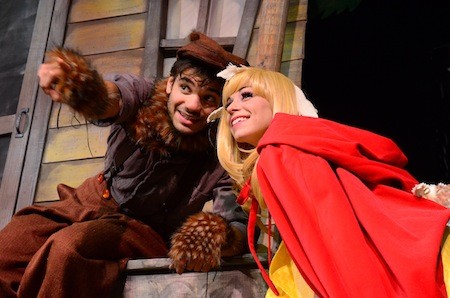 Both were directed - and choreographed - by Ron Chisholm with very uneven results. You'll readily guess where my preference lies when you hear that Some Enchanted Evening was an adult musical boasting music by Rodgers & Hammerstein and live musicians while Rouge is a kiddie tuner with book, music, and lyrics by Joan Cushing and a prerecorded score.

Truth is, Cushing and canned music handily trounced R&H because Petite Rouge packaged two key ingredients that Some Enchanted Evening lacked: a story and dancers who could make Chisholm's choreography shine. Furthermore, Chisholm was tasked with injecting electricity into a medley of R&H classics at Halton Theater using the instrumental ammunition of only two pianos. There's a place on CPCC's campus for such an intimate concept - Pease Auditorium, where Enchanted Evening might have been more enchanting.

At one point during "A Fellow Needs a Girl," Chisholm strove for intimacy by having his male vocalists, Ryan Deal and Patrick Ratchford, sidle up to his pianists, Ellen Robison and Drina Keen, and engage in some brief badinage. But they had to walk upstage to the pianos, painfully underscoring the space between the performers and their audience.

Nor did Chisholm do himself any favors by taking on the extra responsibility of designing costumes. There really didn't seem to be any costumes until after intermission. Then while the guys sported tuxes, the three female vocalists - Susan Sanford, Allison O'Connor, and Karen Christensen - came out in various wispy red dresses of almost the exact same shade that suggested that they might be able to dance or figure skate. After all, it was the final week of the Winter Olympics. The effect was particularly cruel to Christensen in her duets with Deal and Ratchford, adding to the plasticity of her too-ready smile.

Perhaps figure-skater artificiality was apropos when Christensen soloed on "A Cockeyed Optimist," her best moment. Best of the other solos were Deal's spotlights from South Pacific, "This Nearly Was Mine" and "Younger Than Springtime," and Ratchford's bodacious Billy Bigelow rant from Carousel, "Soliloquy." The heft of a true musical was more easily simulated in the duets and trios, most notably in the Deal-O'Connor "If I Loved You" and the women's "I'm Gonna Wash That Man Right Out-A My Hair" - the only scintillating vocal arrangement in the score.

James Duke's classy but sparse scenery did nothing to add any pizzazz, and his lighting was merely functional. A chorus intermittently appeared with all the poise of people arriving at a party where they were unsure if they were in the right place or invited. The music also sparked intermittently, rarely with enough voltage to dispel the impression that we were in the studio audience of a show hosted by Liberace or Lawrence Welk.

Give Chisholm a story and a few hoofers and it all changes at ImaginOn. Walking into the ImaginOn's McColl Family Theatre, you're immediately greeted by an imposing set designed by Andrew Gibbon and Tim Parati. A ramshackle shack looms against a somewhat spooky bayou background, with cypresses that arch upwards to the flyloft. This is the abode of Petite Rouge and her mom, Mrs. Duck. When word reaches our poultry heroine that her Grandmère Duck is down with the flu, Rouge's trusty feline companion TeJean pushes a boat up to the shoreline.

For the path to Grandmère's isn't through the woods as it was in Charles Perrault's fairytale (or Stephen Sondheim's musical) but through the cypress swamp, and Rouge's basket is laden with gumbo, extra-hot sauce, and a hunk of Mom's indispensible cornbread. Nor does Rouge encounter a hungry wolf on her way. Wheeling in an old-fashioned pushcart, with assorted pots dangling from its roof, is Claude the gator. When Mark Sutton sings Claude's "I'm Hungry," the eyes of the costume designed by Magda Guichard are illuminated with a piercing red glow and he swishes some serious tail.

Clinching the whole Cajun deal, Sutton delivers his vocal with an unmistakable Dr. John rasp, accompanied by a trio of Alley Gator backup singers - Kayla Piscatelli, Lucianne Hamilton, and Jany Bacallao. An even more elaborate spectacle, with even more flavorful ensemble choreography, ensues shortly afterwards when Claude accosts Rouge and TeJean, tempting them to follow him to his lair with "What You Waiting For!" Sort of a Cajun tango.

Cassandra Howley Wood periodically shakes her feathery booty just to remind us of Petite Rouge's taxonomy. Her accent is lighter than Sutton's, not at all a concern when she belts out her ballad, "Waiting for Life to Start!" or croons her "Riverboat Waltz." Oh yeah, the path to Grandmère's is ultra-circuitous, wending through a Mardi Gras sequence down in New Orleans - a pretty dazzling set change - as Claude first stalks Rouge then beats her to her destination.

Cushing's music isn't a huge threat to the R&H estate, but as her previous compositions have shown in past Children's Theatre of Charlotte hits, namely Junie B. Jones and Miss Nelson Is Missing, Cushing is adept at the complete package, melody, dialogue, and lyrics. With a smashing design team and ace performers bringing it vividly to life, Petite Rouge is another big ImaginOn hit for the whole family.