When Charlotte Repertory Theatre first staged it at Booth Theatre in 1996, Angels in America was undoubtedly the most controversial and most publicized local dramatic production to ever hit the city. Besides the banner headlines when Christian wackos got their panties in a twist, there was a literal banner across College Street and a billboard on Tyvola Road proclaiming the event, pandemonium in our houses of government, and protesters at the Performing Arts Center - turning the question of whether the show would be allowed to go on into a cliffhanger.

Good Morning America turned the controversy into a live debate on ABC. Even Tony Kushner, the playwright who won two Tony Awards and a Pulitzer for Angels, was compelled to come down and see our surprisingly backward city for himself. At the Booth, Charlotte Rep scored the biggest hit in its history, with more than 11,000 tickets sold to see its most epic production.

Back in '96, it was difficult to sort out how many people were coming to Angels to see what the hubbub was about and how many were coming to see what Angels was about. Eighteen years later, we've seen diminished news coverage as opening night of Carolina Actors Studio Theatre's Angels drew closer, less of a publicity offensive from CAST, and no public hysteria or protesters. So without the hubbub, we're now getting a clearer picture of how many people in Charlotte will come out to Angels to see what Angels is about.

It's not a pretty picture.

Though the thrust theater at 2424 N. Davidson St. isn't even half the size of the Booth, empty seats predominated on Saturday night as Part 2: Perestroika closed out the second full presentation of Angels - more of them than I usually encounter at CAST. Hard to understand. If the Charlotte premiere had been six or eight years ago, we might suppose that our city and its hardcore theatergoers had simply had its fill of Angels. But in 18 years, a whole new generation of men and women who were newborns, pre-schoolers, and middle-schoolers in 1996 have joined CAST's target audience.

Given the fact that Angels has garnered more pre-publicity than usual for CAST, I must reluctantly surmise that today's audience is intimidated by the mighty prestige of Kushner's masterwork and spooked by its Pulitzer and Tonys. Furthermore, they must be largely ignorant of the fine dedicated talent that has been gathered to make this grassroots Angels possible - without anything near the massive support that Charlotte Rep had (and subsequently sacrificed) from our Arts & Science Council.

Seminal, shmeminal! In our CNN-Fox age, unless there is a hubbub - disaster, scandal, controversy, or wingnut outrage - there is no interest.

Folks like me who saw Angels at the Booth will be fascinated by differences time and altogether new personnel have made. Unburdened of the anxiety that something I might see would justify the expostulations and fury of Concerned Charlotteans and City Council, I was actually able to enjoy CAST's Angels with the same serenity I experienced when I spent a whole day with Part 1: Millennium Approaches and Part 2: Perestroika on Broadway before the pair closed in 1994.

Nudity and foul language are so beside the point 20 years later, but homosexuality remains on the front burner of the work Kushner subtitled A Gay Fantasia on National Themes. While victory for the gay struggle is far from a fait accompli, despite recent triumphs for gay marriage, we've unquestionably evolved. Kushner himself seems ambivalent about whether Belize's dressing in drag tarnishes the brand, though he can still cop the plea that he's objectively showing us 1985, but even his Heaven-ordained prophet Prior Walter doesn't envision all the positive transformations that have occurred in American life.

Another thing that makes the CAST experience more akin to my Broadway immersion is that Rep opened the two halves of Angels a month apart. From the outset, Wednesdays and Fridays are now devoted exclusively to Part 1, Thursdays and Saturdays are always Part 2, and two Sundays during the run are set aside for all-day marathons. Certain things are simply perceived more clearly when you see Angels on successive nights, like the parallel beginnings of the two parts, where orations are delivered by Paula Baldwin, first as Rabbi Isidor Chemelwitz in Millennium and then as the "World's Oldest Bolshevik," Aleksii Antedilluvianovich Prelapsarianov, in Perestroika.

Set designers Dee Blackburn and Ken Ellis have splayed out a variety of settings that nearly span CAST's theater wall-to-wall, with Joe Pitt's office on one side and a hospital room on the other bookending the panorama above ground level. A further incursion occurs downstage, where a few audience seats have given way to a park bench. Upstage, a staircase leads up to a ledge where Mr. Lies, Harper Pitt's valium-induced travel agent makes his appearances, sliding down on a fire pole.

Other scenes are set up during the four intermissions, and the sleek sledges that I saw on Broadway and at the Booth bearing scenery are gone. Mike Snow presides over the straitened budget as tech director, coordinating with lighting designer Michael R. Simmons and video designer Donald Devet. Nothing except snow and Angel feathers drops down from above, and our Angel isn't flown. She appears with wings, but they really aren't her own - a good thing, because she's obliged to walk up and down stairs.

Without all the outrageous anguish and press lavished upon Alan Poindexter's genitalia, and without all the technical fanfare lavished upon the angelic visitations that beset him, I was astonished by how little of Kushner's attention is actually devoted to Prior in Millennium Approaches. There are numerous other plot threads going on, including Louis Ironson's moral rehabilitation after walking out on Prior; Joe Pitt's sexual and moral confusion as he mulls over a job offer at the Justice Department masterminded by the villainous gay Jewish shyster, Roy Cohn; and Cohn's dying agonies afflicted with AIDS, indomitably determined to remain closeted until his final breath.

Getting all these engines revved-up onstage without making Part 1 play like a glorified soap opera isn't at all easy. Largely because Rep's 1996 production avoided this pitfall far better than the original on Broadway, I still regard that Millennium Approaches as the best theater production, local or touring, I've ever seen in Charlotte. So it's not a terrible knock on the current CAST production when I say that its Millennium too often resembles a soap. So did Broadway's.

Co-directors Charles LaBorde and Thom Tonetti have assembled a fine cast, mostly established blue-chippers who deliver consistently solid, sometimes revelatory performances. I was chiefly astonished by Bob Paolino as Roy Cohn. Who knew that the McCarthyite monster could be so satisfying with Paolino's added Archie Bunker tang? Yet the man's malignity and ruthlessness are never compromised. His suffering is white-hot. 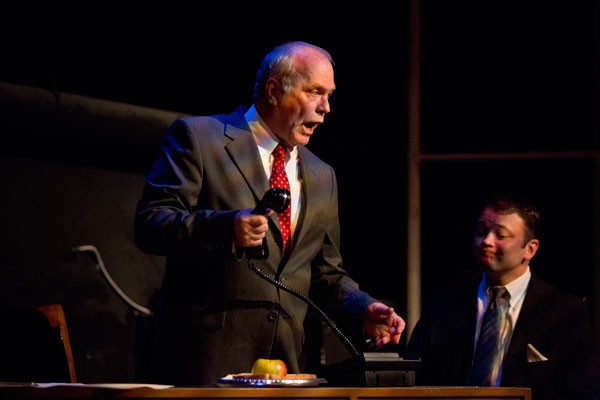 Cohn struggles with his own angel, Ethel Rosenberg, and her ministrations over her tormentor at his deathbed still reach a summit that is only shared by Lear's reconciliation with Cordelia. I wish this sacred moment could be done centerstage, but with Paula Baldwin in peak form as Ethel, the scene still delivers a mighty wallop. I'm almost crying just remembering it. Extra kudos for her Yiddish and Aramaic. Baldwin is also excellent as Cohn's physician and as Hannah Pitt, Joe's Mormon mother.

The three relative newcomers are quite extraordinary. She may be miked as the Angel of America, but Kindra Steenerson is formidable in all of her roles, which include a hospital nurse and Sister Ella Chapter, a Salt Lake real estate agent. Robin Tynes ranks right up there with all the Harpers that I've seen onstage and on TV, bringing a vulnerability to the tripping pill freak that is all her own. While Will Triplett isn't quite the golden boy Scott Helm was in '96 as Joe Pitt, that's a good thing in a way, for we're less apt to forget Joe's past crimes - ironically against himself - as he struggles to discover who he is.

Berry Newkirk as Prior and JR Jones as both Belize and Mr. Lies are mildly disappointing because LaBorde and Tonetti encourage them to play these over-the-top eccentrics decidedly under-the-top. Prior is sullen rather than insulted in response to Louis' betrayal, a valid enough take, but it causes Newkirk to blurt his hurt rather than deliver more fully rounded scoldings. Jones is certainly a believable Belize, but a less flaming Belize is a less fun Belize, and his Mr. Lies is supercool - almost Barry White cool - but too muted. All three of these under-the-top interpretations yield a lot of under-projected acting in Millennium Approaches, which only drew a B grade from me when it played Broadway.

When we get to the A+ Perestroika - more spiritual, more dramatic, more spectacular and more overtly political than Millennium Approaches - Newkirk becomes more energized after his encounter with the Angel. So does Jones during Belize's continued battles nursing Cohn. It would be nice if LaBorde and Tonetti could follow Steve Umberger's example and take Kushner at his word when he categorized Perestroika as a comedy, but Jones is riveting telling Louis off, authoritatively maturing as a nurse, and Newkirk handles everything beautifully from the moment Prior climbs the stairway to Heaven until the majestic Epilogue when he addresses us.

Maybe the ultimate revelation is Joe Rux, who nearly elevates Louis to the stature of Kushner's main protagonists, Roy and Prior. If you ask me whether Rux's Louis is the best I've ever seen, I couldn't say no. He gets Prior's dastardly boyfriend down to the bone: his squeamishness, his sensuality, his prevarications, his lies, his self-deception, his wearisome ambivalence, and his intellectual logorrhea are all so Jewish and so New York, right down to his ignorance of his own religious heritage.

All the people in Angels are facing wrenching changes in their lives. Even in the heavenly sphere, the angels are panicking because God left them in 1906 and hasn't returned. LaBorde and Tonetti blunder in reducing the angelic host to a rabble akin to the mechanicals in A Midsummer Night's Dream, yet they are sure-footed in capturing the forward movement of the flawed and wounded souls on Earth and spot-on in underscoring Prior's heroic rejection of God and his heavenly angels.