In their own words 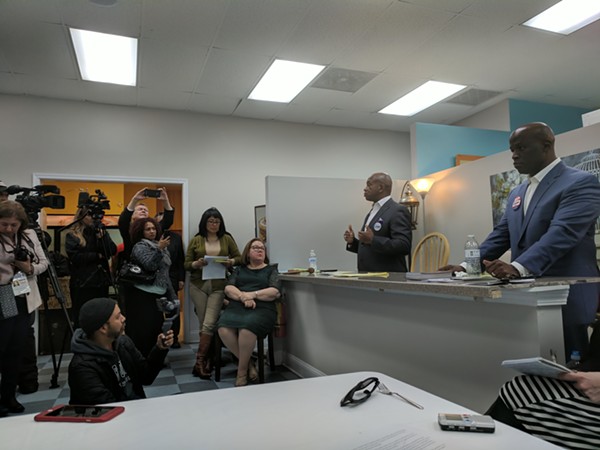 The race to become the county's top law enforcement officer is heating up, as incumbent Mecklenburg County Sheriff Irwin Carmichael has been taking flak for his office's more controversial policies, namely its participation in the 287(g) program.

On Tuesday, March 13, Carmichael held a press conference defending his office's use of the program, which gives the department access to a federal database that allows them to identify undocumented immigrants coming into the jail, then flag them for consideration by Immigration Customs and Enforcement.

Outside of the press conference in Uptown, community organizers held a small rally calling on the county to pull out of 287(g), which it's been involved in since 2006. Both of Carmichael's opponents in the upcoming May primary, Gary McFadden and Antoine Ensley, signed the protesters' petition in support of ending the program in Mecklenburg County.

The following night, Ensley and McFadden, both former CMPD officers, participated in a debate hosted by the Latin American Leadership Civic Engagement Committee at Las Delicias Bakery in east Charlotte. Carmichael did not participate in the debate, stating he had a prior commitment.

The following direct quotes were pulled from the debate, as well as from a one-on-one interview with Carmichael in the days following the debate. They touch on some of the campaign's most-discussed issues.

First, each candidate addresses the 287(g) program, which led to 1,300 inmates being flagged last year and 290 being deported, according to ICE.

Irwin Carmichael: There's so much misinformation out there that we're deporting people. We've never deported not one person. [The 287(g) program] is used to identify exactly who is inside our jail, and we have to know that for safety and security.

Plus for classification; if a person is a member of the MS-13 gang, we need to know that, and we're able to properly classify them inside our jail, because the last thing we want to do is put them in a cell with other MS-13s or rival gang members.

So, it's about safety and security, no other reason. We don't round folks up, we don't do any of that. You have to be arrested and charged with a crime and brought to our jail. 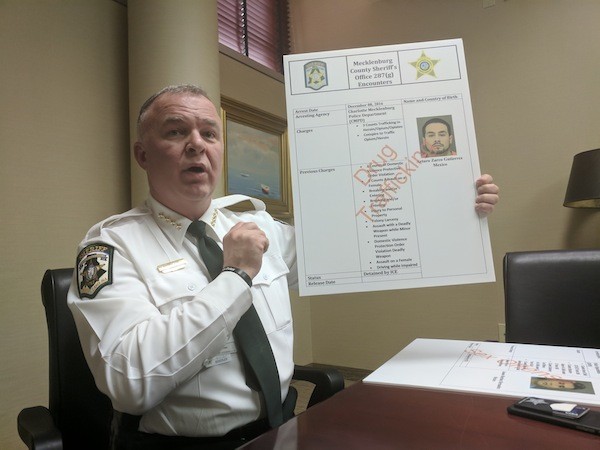 Gary McFadden: 287(g) does not bridge a gap to this community or any other community. I know 287(g) very well, because 287(g) hindered my job as a homicide detective.

Why? Because I had a couple of cases here on this street [Central Avenue] and Albemarle Road, open homicide investigations, because people are afraid to talk to the police.

There's no trust, there's no loyalty, so why should they come and talk to us? They're afraid that if I talk to them about a case, they will be arrested.

I know personally there is a young lady in this community who has been assaulted by a law enforcement officer, and we all know that case very well. There's a young lady who was afraid to come forward because she was afraid that her husband would be arrested for the 287(g).

Antoine Ensley: 287(g) becomes a barrier because the sheriff's department has made it a barrier. But if 287(g) is not there, what will be the excuse later? Law enforcement must get in communities, must build relationships in these communities, must show up in churches, businesses and make sure that our immigrant community feels like they're one with the community as well.

So let's be honest, let's not just say 287(g) is the only problem. It's the easiest problem to solve. As soon as we dismantle it, it's gone.

Another policy that Carmichael's staff has gained negative attention for is the end of in-person visitations at the Mecklenburg County Jail, which was implemented in October 2016. The jail now allows inmates two free video visits per week, with an option for unlimited remote video visits for a fee.

Everyone discusses about the payment. You don't have to pay. You get these two visits to come down free of charge, and if you don't want to pay, they don't charge you anything. But if you want to do the convenient remote visits, then you have to pay for that.

So the whole purpose is keeping them connected with their family members.

Ensley: When I started as Superintendent [of Juvenile Justice Programs in Norfolk, Virginia], my goal involved secure detention in less secure facilities.

So, within those facilities, visitation was very important. Visitation helps those people transition properly back into the community. It's a fundamental. It's a human rights responsibility that the sheriff must deliver to the people.

People must understand that the sheriff's department is a direct service business. So, it's important to allow people to have visitation — not video visitation, the right visitation — because it's part of helping people have good mental health.

Confinement is challenging enough, so when you don't have visitation, when you can't interact with your loved ones directly, it hinders the process of people transitioning back to the community. 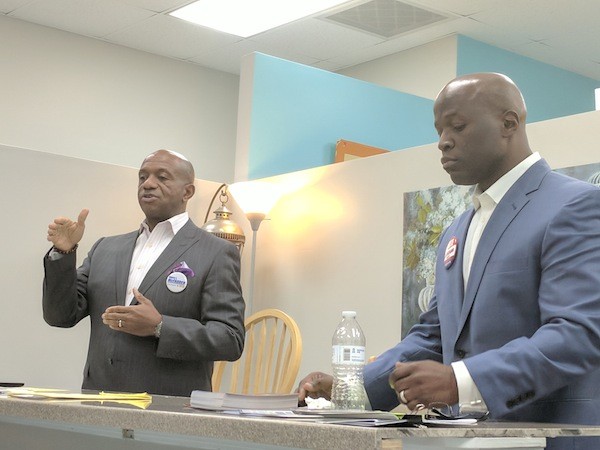 McFadden: I would allow video visitation for someone who is out of state, but not even make them pay for that visitation.

If a parent hasn't seen their child, while they're going to court, that's going to be a problem.

In 2016, Carmichael defended the use of Disciplinary Detention Units, which consist of single-person jail cells where youthful offenders are sometimes placed as a punitive measure. Called "torture" by the state's NAACP branch, Carmichael said the units meet North Carolina's standards of accreditation.

McFadden: If you go to Jail North [on Spector Drive in north Charlotte], Mecklenburg County has a facility that they do not use. When I'm elected sheriff, we're going to change that.

What I would like to do is take that facility that we have up there and utilize it instead of having a child inside of a block, in solitary confinement — bring him out, give him a mentor, give him someone to talk to, and actually have his parents come and visit him in that facility.

Why? Bridging that gap between a mother and a child when they have been separated.

No matter what crime they have caused, let's think about it, because the mental health issue is going to also be a problem.

But they're still allowed visits with their clergy, their doctors, they still have access, it's just they cannot see their family members. It's a disciplinary thing, because they assaulted someone.

If they're coming in and they're following the program, they have full freedom. They're going to be out, they're able to see folks, they're in school, they're getting their high school diploma. They're working in the programs. But if they're causing havoc, as I always tell people, is there a better solution? Tell me what it is.

They put themselves in that position. They come in, everybody's treated equally at all times from the start.

Ensley: As North Carolina begins to raise the age here in our state in 2019 [the state recently passed legislation ending the practice of automatically trying 16- and 17-year-olds as adults], we have to be very intentional about building alternatives to detention.

It's not enough to say that kids are going to jail; let's build alternatives in the community so that kids who don't need to be in jail don't have to be in jail. That's going to require us to make some very important, fundamental decisions about how the sheriff's department shows up in this community.

Young people are developed different, they're migrating in their thinking differently, so we have to be very clear that the sheriff understands the broad issues that we're dealing with in the sheriff's department in this day and age.

It's just not enough to wrap programs around kids when they're actually in detention. You have to actually serve them in the community as well.

So, let's think very broad about the work that needs to be done and the sheriff needs to show up and get in the juvenile justice business.