Why do Soulja Boy, Trey Songz and Tila Tequila have to be the only ones who can have their fans sit and stare at them do relatively mundane things online in the middle of night?

J. Cole, a Fayetteville, N.C., native and first Roc Nation signee, reached out to his small but loyal force of fans at 2 a.m. on July 23, answering questions, telling stories, playing new and old tracks and even jumping in the booth to record a new song while UStream-ing live online from a studio on the West Coast.

UStream is the live interactive video broadcast platform that lets anyone with a camera and an Internet connection to quickly and easily broadcast to a global audience of unlimited size. 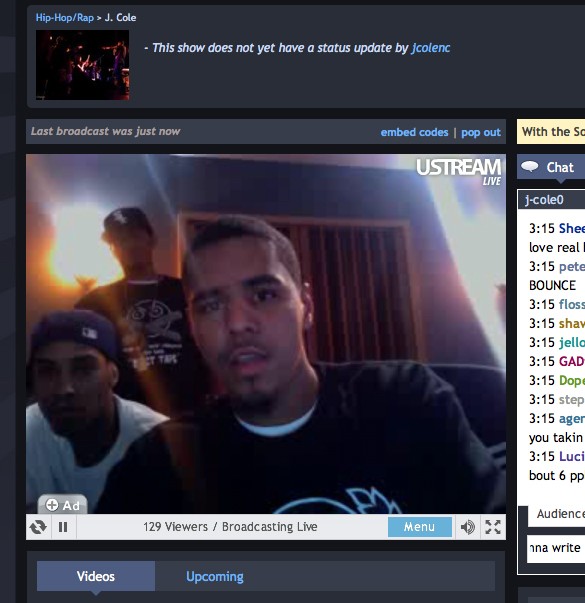 While swigging on a Heineken like it was a 40-ounce, Cole managed to keep 160-odd registered users (and reported 700+ guests) entertained for about 90 minutes. In between, hundreds of "I got beats," "where do I send beats?" comments and a seemingly endless stream of university, hometown and homeboy shout outs viewers kept posting, he actually managed to find some good questions buried in between.

After playing one track, and nodding hard enough to at least sprain his neck, Cole casually states that he's trying to get out of mixtape mode to get ready for his album, but says he has "some freestyles left in him." Viewers of course assume that means another mixtape which prompts the artist to explain his thoughts on overexposure. "I'm thinking about it, but I'm not really into giving so much free music," saying Cole, who just dropped a 22-song mixtape for free five weeks ago.

"Some people put out too much," he continued as a few viewers laughed and took shots at Brooklyn-rapper Charles Hamilton. "Just give me seven weeks to sit on them 22 songs," he laughs.

Unsold on the power of Twitter, Cole declares he wants to see if he can get 100 new followers tonight, then a viewer asks if 100 new followers means new music and jokingly Cole replies "I gotta get 1,000 for new shit."

The room is moving quick, but Cole is keeping up and beginning to answer the rapid questions with short answers. Wale, Little Brother, Nas, Jay-Z and countless others get quick seals of approval, but by this time, everyone is joking that he should do a song with actor turned rapper, Drake, since bloggers seems to be creating an imaginary beef between the two. Cole also addresses other random beef questions including one viewer asking "why Jay-Z didn't diss The Game?" after he dissed Cole's employer on a new track. The grateful employee laughs and replies, "cause he's fucking Jay-Z"

Before Cole was rapping for a living, he was a student at St. John's University in New York City and apparently the world's laziest telemarketer, admitting that he made no calls and actually spent all his time browsing hip-hop blogs online. That online "research" at work, led to the best story of the night.

While he was reading a blog online at work, he first heard the buzz about Jay-Z's then upcoming album, American Gangster. Cole thought God had given him a sign. "I'ma go home and do some shit and I'ma make it," he said. So, he goes home, makes a beat called "Top of the World" which he thought would be perfect for the album, throws on a shirt that says "Produce for Jay-Z or Die Tryin" (playing off the huge success of 50 Cent's "Get Rich or Die Tryin'" at the time) hops the train with some friends to Bassline Studios in N.Y.C. and proceeds to wait outside in the rain to give Jay-Z this beat that would change his life.

After waiting for a few hours in the rain, Jay-Z pulls up in a Black Phantom. "He was either on the bluetooth or faking, when he gets out of the car ... my heart is beating like crazy," said Cole. Cole walks up to him casually and holds out a CD. A security guard steps in and asks, "What's that?" In Cole's nervousness, he blurts out "American Gangster."

The room erupts in laughter.

"My life was destroyed," said Cole. "On the train I thought he was gonna take the CD, play it and be like, GO GET THAT KID!"

Cole continued, "I was devastated, dog, I looked like a helpless child ... this is my moment."

Cole and his crew continued to stand outside of Bassline Studios as his boys reiterated, "that's fucked up." A while later, they see Jay-Z and Beyonce leaving the studio together and can only muster a "hey" in between the "oh shit" thoughts going through their head.

Cole says he told Jay-Z the story when he signed with Roc Nation in February and Hov laughed about how things come full circle. With everyone's interests peaked, Cole turns on the beat and it does sound exactly like something from the American Gangster album.

The crazy instrumental and story of persistence leads to heaps of praise (especially for 2:30 a.m.) for the 24-year-old MC. One viewer calls him "a star" to which Cole replies, "Trust me, I'm far from a star right now." One teen fan even throws out a Nas comparison and even Cole's impression was like "Whoa, too far."

He gets a little excited and says "Light skin niggas taking over the game!" laughs, then immediately apologizes laughingly "That was whack, my fault." The rapper seemed to be almost blown away by the support, as he turns and talks to his boy about how he used to be the same shit and how hype he would've been if Cannibus had a UStream back in the day. "I would've been on there all night," said Cole.

After getting lost in the chat for nearly an hour, Cole realizes that he still has work to do in the studio but instead of logging off, which most artist probably would have done, viewers convince him to turn his MacBook around and record himself dropping a verse in the booth (its 2:48 a.m.)

In the booth Cole looks like he's reading his lyrics off his hand or cell phone but walks through the track with his other hand moving crazy. Viewers got a chance to get a sneak peek into the studio experience with Cole dropping lines like "I made straight A's now try to degrade us" and "I'm the unibomber bitch, I'm blowing up over night!"

The first take was good. Cole even laughs that he's trying to be 'one take Hov' but he asks for another shot. This time he stumbles in the last bar of the verse. A few quick-on-the-keys viewers dub him, "three-take Cole" an obvious stab at him not being as good as Jay-Z just yet.

On the third take, Cole ends the verse with "lemme check my USTREAM" then leans on recording booth glass so he can read his laptop. Clever, but the verse didn't deter some viewers from saying he'd just dissed Drake. "Diss drake? Damn sure didn't," said Cole.

It didn't take long for a friendly chat to turn into an impromptu roast session with J Cole and his crew becoming fair game. Viewers hurled their best jokes at the crew, including calling Cole a "jail house version of Chris Brown" and random NBA player look-a-like comparisons that kept them laughing.

After Cole stepped out the booth, many of the viewers who were still up wondered aloud who his musical influences were. "2Pac, lots of West Coast shit, Snoop, Dre ... Kriss Kross," says Cole.

Cole shamefully admits that he's been rapping since he was 12, when he'd freestyle with his cousin from Louisiana, repeatedly calling 12-year-old lyrics, "whack."

After saying he was about to sign out but continuing to be glued to his screen, one viewer got him to admit that was indeed an internet addict. Before he signs out for the night, Cole asks the now dwindling viewers, what their favorite track of his is and seemed to be excited every time a viewer dropped a new song title, repeating them outload excitedly and co-signing.

After a goodbye that included pulling an electric guitar out of God knows where, J. Cole bids new fans, and old, an adieu and fellow insomniac music heads had to figure what else they could do at 3:25 a.m.

WHAT DID WE LEARN?

- One of his dream collabs would be Alicia Keys

- What would've happened if he had made the basketball team at St. John's? "I'd probably be on the bench."

MOST LAUGH OUT LOUD MOMENTS: Like every other chatroom that's ever existed J. Cole's wasn't without spammers and haters, but he managed to take the digital criticism in stride. When one such spammer decided to type in all caps that Jay-Z was going to shelf his album (meaning delay it's release — for non-music heads), Cole replied "Yeah, Jay got my album on the shelf ... top shelf nigga!" Classic!

After going through his academic credentials, one user congratulated the rapper, then said that he had graduated from college with a 1.9 GPA because of racist teachers. Cole laughed and replied, "It ain't enough racism in the world to give your ass a 1.9."

You can find more info on J. Cole at his Web site, or just follow him on Twitter. You can also download his latest mixtape The Warm Up here.