Over the past three years, we've seen violinist Livia Sohn perform each season during the lunchtime Bank of America Chamber Music series at Spoleto Festival USA in Charleston, S.C. Most notably, Sohn played the Kreutzer Sonata, one of Beethoven's supreme masterworks, during the final weekend last year, signaling she was ready to become more prominent in the constellation of instrumental stars who play at the Dock Street Theatre. 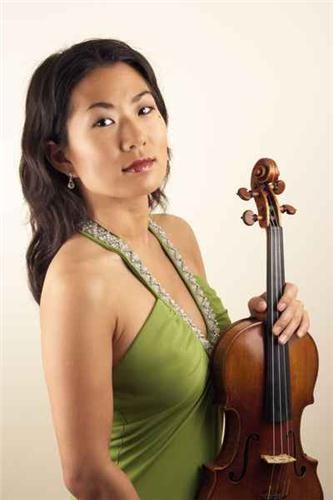 This spring, she returns to Spoleto on the heels of her first CD as a member of Trio Latitude 41, releasing Schubert's Piano Trio #2 and Notturno on the Eloquentia label. After receiving the new CD, I sent word back through the label's publicity agent that Sohn needs to know that her name means Leviathan in Hebrew - so I expect her to become more assertive the next time she performs at Spoleto, held in Charleston, S.C., between May 25 and June 10, 2012.

Compared to two other charismatic Kreutzers I've heard live in the past 14 months - Daniel Hope's at Savannah Music Festival last spring and Shlomo Mintz's at Temple Israel last month - Sohn's was rather bland and vanilla. The new CD is better, beautifully played with truthful sound and a genuine flair from pianist Bernadene Blaha, whom I'd never heard before. Still it lacks those last ounces of fire that distinguish performances which leave a lasting mark, and the recording engineer has only underlined Sohn's diffidence by tilting the balance toward the piano.

But the Schubert was recorded in September 2010 at The Banff Center in Alberta, long before Sohn's Kreutzer and longer before I could inform her of her biblical stature. So, a new Sohn may rise at this year's Spoleto since she's definitely getting more play: Ernest Chausson's Concerto for Violin, Piano and String Quartet (May 25-26), the Waltz from Joseph Lanner's Dornbacher Ländler and Domenico Gallo's Trio Sonata #1 (May 28-29), Henryk Wieniawski's Étude‐caprice (June 2-3), Partita V from Heinrich Franz von Biber's Harmonia Artificioso‐Ariosa and Schubert's Duo in A major (June 6-7), Gabriel Fauré's Piano Quartet #1 (June 8-9) and Schoenberg's arrangement of Debussy's Prelude to "The Afternoon of a Faun" (June 9-10).

Meanwhile, if you're interested in getting into Schubert, two other CDs have recently crossed my threshold that I can highly recommend. Both of these RCA Red Seal recordings feature David Zinman conducting the Tonhalle Orchestra in Zurich. If plodding or bland performances have soured you on Schubert's symphonies, these new recordings should win you back - and kindle excitement for a complete Schubert cycle that promises to best Claudio Abbado's more than 20 years ago.

Zinman isn't going in strict chronological order, and he's meandering into non-symphonic territory. The first CD presents Symphony #1 paired with #2, two pieces we don't often hear in the concert hall. Both are surprisingly vibrant under Zinman's baton, particularly the #1 in D. Even though the #2 in B flat isn't as taut and exciting throughout, the first two movements retain a lightness that hearkens back to early Mozart, and the final two movements, a Menuetto and a Presto, bring back the thrusting zest modeled more on Beethoven. Why these pieces aren't heard more often is beyond me. 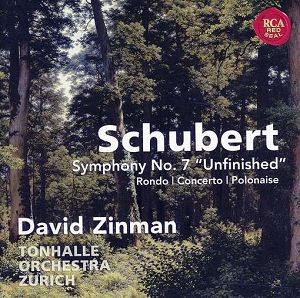 The Tonhalle is even more impressive on the second CD, headlined by the famed "Unfinished" Symphony #7 in B minor. Sweet spots are effectively contrasted with the thunder in the opening Allegro, plenty of airiness from the violins complementing the wondrous definition from the winds. Nor does the ensuing Andante lie down to die, infused with sweet vernal delicacy, gently waltzing until moments of fearsome grandeur or ethereal sublimity break through. Increasing the appeal of this beautifully recorded "Unfinished," Zinman couples it with three rarities, all of them single-movement works by Schubert for violin and orchestra.

Andreas Janke makes a delightful classical recording debut as the soloist, beginning with the Rondo in A. Yes, the Polonaise in B flat is slighter stuff, both instrumentally and orchestrally, but Schubert's ability to enchant us with melody is as beguiling as ever, and there's more than enough bounce here to affirm the dancing title. The Konzertstück is the most virtuosic of the three mini-concertos, with occasional hints of gravitas from the orchestra and the soloist, but Janke keeps the listener engaged even when Schubert keeps repeating his main melody.