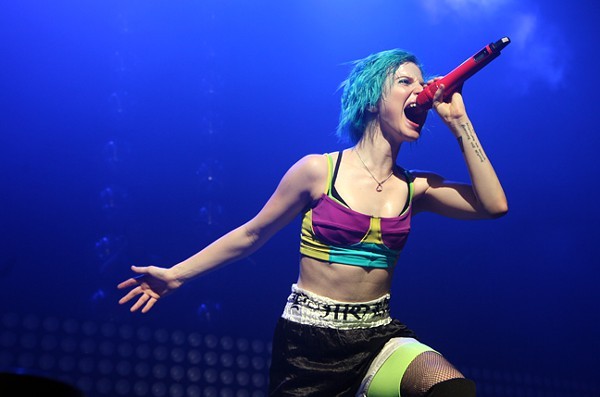 Paramore and Fall Out Boy are, in some ways, cut from the same cloth. Both came up as pop-punk bands on the smaller record label Fueld By Ramen more than a decade ago. Both have scored top singles on pop and alternative-rock radio alike in their 10 years on the scene (going “mainstream” as it were). Both bands cut their teeth on festival circuits like the Vans Warped Tour as newbies. Yet despite all of this, the labelmates have never toured together. Until now.

The “Monumentour” rolled into Charlotte Wednesday night at the PNC Music Pavilion to an almost sold out show and put on what can only be described as a spectacle.

Despite the crippling heat and humidity, hardcore Fall Out Boy and Paramore fans pressed into the outdoor arena and rode through an almost three hour show by feeding almost exclusively off of the two bands' energy. Denmark-based newcomers New Politics offered an appetizer to tide fans over until the main event, but the question remained: which of the two top charting bands would be the real “headliner” on this co-headliner tour?

The answer came when Hayley Williams, Taylor York and Jeremy Davis as they took the stage to start off the show with a bang, literally. Launching into its set with one of the band's most successful singles to date, “Still Into You,” Paramore buzzed through a show filled to the brim with streamers, confetti, smoke machines and even disco balls. It was the most high tech, as far as special effects, the band has ever been.

But the best part of Paramore is that the band don’t use effects as a way to distract its audience from mediocre playing. In fact, even though there have been lineup changes over the years, Paramore's members have honed their craft finely over their 10 years as a band. They’re truly better live than they are on their albums. And the streamers? Well, they just add to what’s already a huge party.

The set was a bit shorter than usual, thanks to the co-headlining nature of the show. So, Paramore skipped staples like the anthem “Now” and “Playing God.” However, the band played a few rarities and avoided only playing the hits.

When the last pieces of confetti fell, Fall Out Boy (Patrick Stump, Pete Wentz, Joe Trohman and Andy Hurley) took the main headlining slot seemingly through circumstance. Someone had to go first/last, right?

Fall Out Boy arrived in style; rising onstage as a fireworks display went off, the band immediately began raging with “Phoenix.” Fitting when you consider this is their first big-venue tour since the band's hiatus — FOB is metaphorically (and literally, with the fireworks) rising from the ashes as a band.

Though last year’s album, Save Rock and Roll, was technically considered a comeback album for Fall Out Boy, the band played the majority of its tracks for a show punctuated by pyrotechnics, fireworks and an impressive moving LED screen display. 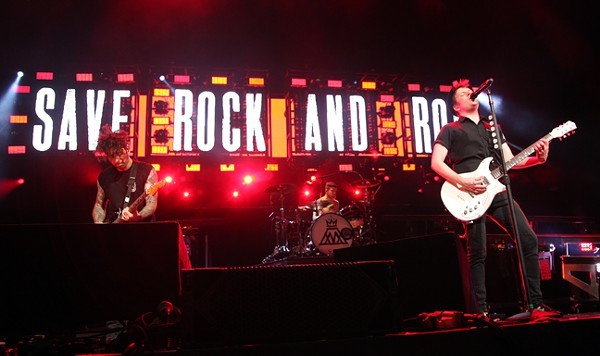 Those who only knew their hits may have been disappointed, but the die-hard fans lost it as they watched Stump belt out the newer, soulful numbers. Fall Out Boy still holds up as a live act even after a long hiatus. The crowd danced to Paramore, but screamed along with Stump to every word, exploding when hits like “This Ain’t a Scene” and “Sugar, We’re Going Down” emerged.

Truth is, both headliners on this tour completely stole the show: just in different ways. There’s not a clear standout between Paramore and Fall Out Boy, but only because both of them rock so hard in the first place and connect with their fans on such a level that live shows are explosive to be around.

The Monumentour continues through August as it crosses the nation and if you missed the Charlotte show? You should probably see if there's another nearby show; this is a rare opportunity not to be missed.

Paramore
Still Into You
That’s What You Get
For a Pessimist, I’m Pretty Optimistic
Ignorance
Pressure
Decode
The Only Exception
Let It Happen
Feeling Sorry
Misery Business
Let the Flames Begin
Part II
Proof
Ain’t It Fun

Fall Out Boy
The Phoenix
The Take Over, The Break’s Over
A Little Less Sixteen Candles, A Little More Touch Me
This Ain’t a Scene, It’s an Arms Race
Alone Together
Death Valley
Sugar, We’re Goin’ Down
Miss Missing You
Dance, Dance
Young Volcanoes
Just One Yesterday
Grand Theft Autumn/Where Is Your Boy
We Are the Champions (Queen cover)
Save Rock and Roll
I Don’t Care
My Songs Know What You Did in the Dark (Light 'Em Up)