From the hour-long fury of Foals' set to the driving rock of Silversun Pickups and the solid warmup rock of Joywave, there was rarely a dull moment during Thursday night's concert, which also served as the 21st birthday party for local radio station 106.5 The End.

Foals offered 60 minutes of intense rock thunder that was relentless for the duration. Halfway through, I kept thinking, "I pity the band that has to follow these guys." While Silversun Pickups sometimes skews more mellow in radio play, the band had no problem holding its own as the headliner, finshing the one-two punch without a problem. 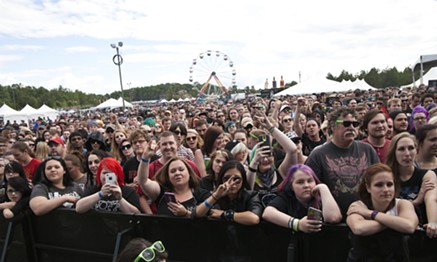 One of the most interesting things about Carolina Rebellion is just how much the festival has changed since it started. What began as a single-day event at Metrolina Expo Fairgrounds in 2011 has now become three days filled with metal mayhem at Charlotte Motor Speedway.

A good number of the acts return to perform on a regular basis, but festival organizers have worked to diversify it a bit, as well. I doubt anyone would have expected acts including Lynyrd Skynyrd and Collective Soul to be included on the bill when Carolina Rebellion first started.

For the festivals sixth year, fans were treated to a wide range of performers as well as fantastic weather and a handful of standout moments. Among the more memorable: