Abbott and Costello Meet Frankenstein, The Hand That Rocks the Cradle, Terminator box set among new home entertainment titles | View from the Couch | Creative Loafing Charlotte
Switch to the mobile version of this page. 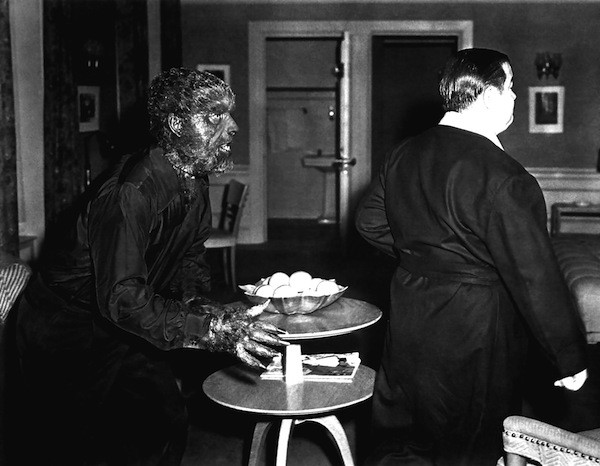 ABBOTT AND COSTELLO MEET FRANKENSTEIN (1948). In their heyday, the team of Bud Abbott and Lou Costello made a sizable number of smash hits, but none have endured quite like this horror-comedy classic, enshrined in recent times by both the Library of Congress and the American Film Institute. This is the best of the boys' efforts, allowing them to go for the nyuks yet never diminishing the standing of the classic Universal Studios monsters that figure in its plot. Bud and Lou are Chick and Wilbur, baggage handlers who end up delivering crates containing the bodies of Dracula (Bela Lugosi) and the Frankenstein monster (Glenn Strange) to a Florida horror museum. Soon, the ghouls are up and about, with Dracula planning to put Wilbur's dim brain inside the creature's body. Lawrence Talbot (Lon Chaney Jr.) arrives to warn the pair, but his aid is interrupted whenever a full moon turns him into the wolf man. This was the final film in the prosperous monster cycle that had begun with the one-two punch of Dracula and Frankenstein in 1931; as for Abbott and Costello, the success of this picture led to them Meeting other horror icons over the ensuing years, including the Mummy, the Invisible Man and Dr. Jekyll and Mr. Hyde. 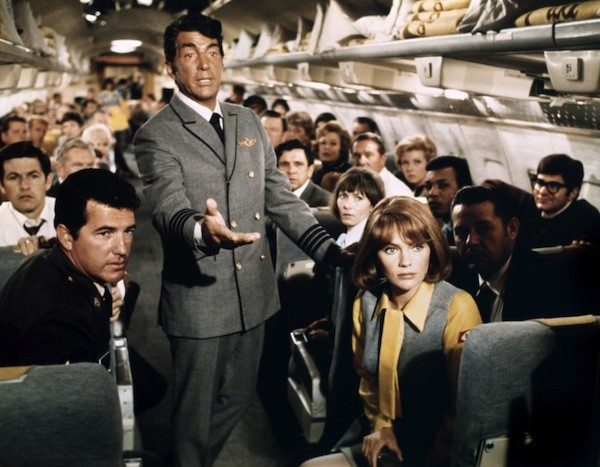 AIRPORT (1970). The story goes that when someone informed Burt Lancaster that Airport had scored a barrel of Oscar nominations, he retorted, "I don't know why. It's the biggest piece of junk ever made." Considering that Lancaster was the film's top-billed star, such candor is refreshing, but truthfully, the movie is better than his comment suggests — yes, it may be junk, but it's irresistible junk, like cotton candy, chicken nuggets or Gilligan's Island reruns. Ranking second only to Love Story (for my money, a worse movie than Airport) as the biggest moneymaker of its calendar year, this adaptation of Arthur Hailey's gargantuan bestseller ended up serving as the opening salvo in the decade-long cycle of disaster flicks. An all-star cast mills about in this melodrama in which a blizzard paralyzes a major airport while a plane is subjected to the whims of an unstable bomber. Lancaster plays the airport head, Dean Martin portrays a pilot, George Kennedy commands the ground crew, and so it goes. Top acting honors go to Van Heflin as the distraught bomber and Maureen Stapleton as his concerned wife. Nominated for 10 Academy Awards (including Best Picture and Best Supporting Actress for Stapleton), this copped the Best Supporting Actress trophy for Helen Hayes (as an elderly stowaway). This was followed by Airport 1975 (poor), Airport '77 (not bad) and The Concorde ... Airport '79 (absolutely awful).

Blu-ray extras include the theatrical trailer and two featurettes tied to Universal's 100th anniversary: The '70s, and The Lot. 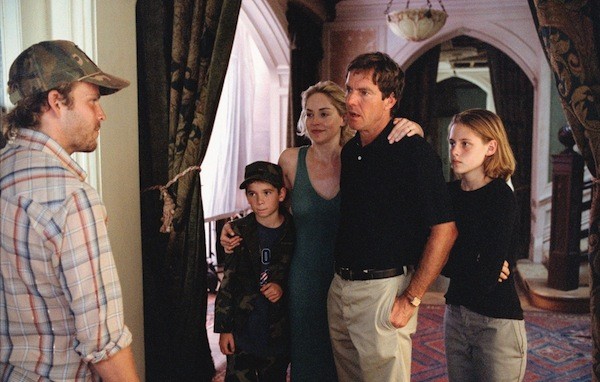 COLD CREEK MANOR (2003). This dud from director Mike Figgis (Leaving Las Vegas) is like a dead-end street in a swanky neighborhood, offering some interesting glimpses along the way but ultimately leading absolutely nowhere. Dennis Quaid and Sharon Stone headline as an NYC couple who, tired of the big-city bustle, grab the kids (including a daughter played by a 13-year-old Kristen Stewart) and purchase a mansion out in the sticks. Everything's fine until the previous owner (a typically underwhelming Stephen Dorff), a rube just released from prison, shows up; after that, bad things start happening — a dead horse in the swimming pool, a live snake in the bedroom — and the family begins to suspect that their new home may have been host to tragic events in the past. What Richard Jeffries' script lacks in originality, it makes up for in gaping plotholes — hardly what I would call a fair trade-off. Incidentally, Figgis also composed the score, which during the tense scenes merely sounds like a two-year-old incessantly banging on random piano keys.

Blu-ray extras include audio commentary by Figgis; deleted scenes; an alternate ending; and a making-of featurette. 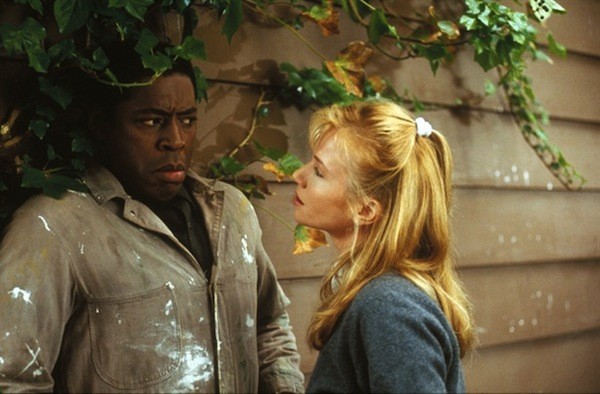 THE HAND THAT ROCKS THE CRADLE (1992). Five years before adapting and directing the modern masterpiece L.A. Confidential, Curtis Hanson helmed this sizable box office hit that, like 1987's Fatal Attraction, used home invasion as a crafty commercial hook. After a gynecologist (John de Lancie) is revealed to have acted inappropriately toward numerous patients, he takes his own life, leaving his pampered wife (Rebecca De Mornay) penniless. Swearing vengeance on Claire Bartel (Annabella Sciorra), the woman who lodged the initial complaint, the widow creates a new identity and lands a job as nanny to Michael (Matt McCoy) and Claire's young daughter, Emma (Madeline Zima, now all grown up and recently co-starring in Californication). Trusted by the family, she sets out to thoroughly destroy Claire's life, with only the Bartels' mentally challenged handyman (Ernie Hudson) and Claire's best friend (Julianne Moore, memorable in only her second screen appearance) seeing through her. Hanson and scripter Amanda Silver respect their audience enough to avoid throwing in the usual nonsensical cheap scares — no cats suddenly jumping into the foreground in this picture — but the cluelessness of Claire and Michael is often too hard to swallow.

There are no extras on the Blu-ray except for theatrical trailers. 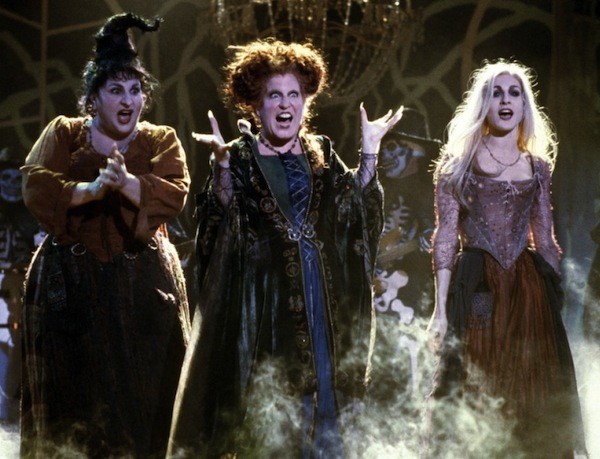 HOCUS POCUS (1993). A break-even release during the summer of '93, this Disney comedy has since emerged as a favorite around Halloween, though it strictly remains more "trick" than "treat." After being hung in 1693 Salem, three witches (Bette Midler, Sarah Jessica Parker and Kathy Najimy) reawaken 300 years later, ready to wreak havoc once more; the only ones who can stop them are three kids (Omri Katz, Thora Birch and Vinessa Shaw) and an immortal black cat that can occasionally talk to humans. Midler (made up to look like a Cats reject) and her two co-stars are defeated by tiresome characters, and under the supervision of director Kenny Ortega (of Newsies notoriety), the whole production (including the visual effects) looks garish and cut-rate — a recurring problem with many live-action Disney flicks from the period. The highlight would have to be the engaging scene in which Midler leads her backups in a rousing rendition of Jay Hawkins' "I Put a Spell on You"; the lows are too numerous to mention, though the comic antics of a shuffling zombie and the embarrassing cameos by sibling filmmakers Penny and Garry Marshall (cast as a bickering married couple) immediately spring to mind.

There are no extras on the Blu-ray except for theatrical trailers.

SIXTEEN CANDLES (1984). Billy Idol and Oingo Boingo appear on the soundtrack. Culture Club and Heather Thomas can be spotted on bedroom posters. Add an Asian character with the decidedly non-PC name of Long Duk Dong ("I gotta sleep under some Chinaman named after a duck's dork"), and there's no question Sixteen Candles clearly emerged out of the 1980s. The late writer-director John Hughes would make an even more quintessentially '80s movie the very next year (1985's The Breakfast Club), but this was the feature that put him on the map as the spokesperson for the younger generation and also propelled Molly Ringwald and Anthony Michael Hall to stardom. Ringwald stars as Samantha Baker, who's mortified that her sister's upcoming wedding has resulted in her entire family forgetting her 16th birthday. On top of that, the obnoxious in-laws have come for a visit, her dream guy (Michael Schoeffling) is dating a popular blonde (Haviland Morris), and she's being pursued by a nerd named Ted, aka "The Geek" (Hall). The plotting is crude and haphazard, but the dialogue is amusing and the cast is appealing. Justin Henry, the kid at the center of the divorce in Kramer vs. Kramer, here steals scenes as Samantha's sarcastic little brother, while siblings John and Joan Cusack both appear as high-school have-nots.

Blu-ray extras include a retrospective featurette and two featurettes tied to Universal's 100th anniversary: Unforgettable Characters and The '80s.

TERMINATOR ANTHOLOGY (1984-2009). The four films in this science fiction series have been released on Blu-ray on several occasions in the past, but always individually. This box set, available exclusively at Best Buy, is the first time the quartet has been packaged together in one collection. 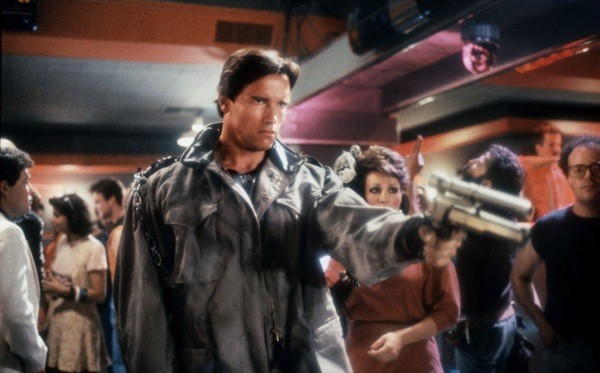 Still a toss-up between The Terminator (1984) and Aliens as to which James Cameron picture ranks as his best (don't anybody even breathe the word Avatar), this propulsively exciting yarn about a murderous cyborg has long staked its claim as a classic — science fiction or otherwise — for the ages. (For starters, the Library of Congress added it to its National Film Registry in 2008.) In retrospect, it's hard to believe it only grossed $38 million during its original run and received reviews that, while largely favorable, were hardly raves (give Time credit, then, for being one of the few major publications to include it on its year-end "10 Best" list). But the film found its sizable audience on video and, for better or worse, went on to spark Arnold Schwarzenegger's superstar status (although I would argue that the real star of this first picture is Linda Hamilton, terrific as Sarah Connor). And yes, the rumor is true: Cameron considered O.J. Simpson for the role of the Terminator but ultimately felt audiences wouldn't accept him since he was "too nice." 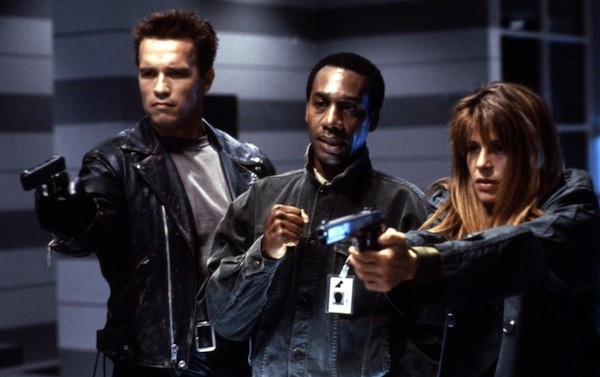 Cameron, Schwarzenegger and Hamilton are all back for Terminator 2: Judgment Day (1991), an explosive sequel in which Arnie switches to portraying a good Terminator while Robert Patrick is cast as the new-and-improved cyborg. This is the biggest of the franchise in practically every sense: It's the top-grossing of all four Terminator flicks, it sports the longest running time, and it's the only one nominated for any Academy Awards (it went 4-for-6, winning for Best Visual Effects, Makeup, Sound and Sound Effects Editing). 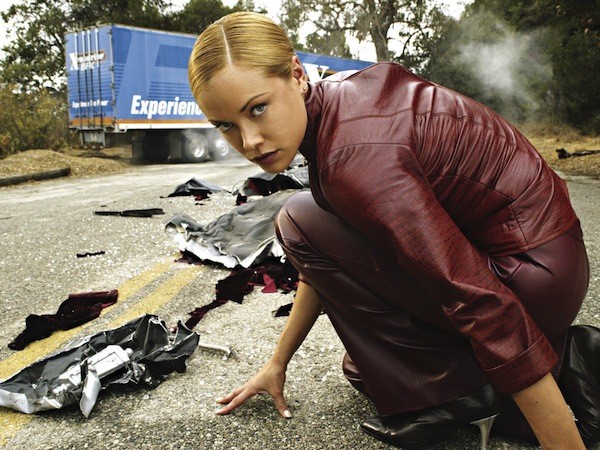 Clearly, sights were adjusted southward for the belated follow-up Terminator 3: Rise of the Machines (2003) — Cameron is missed behind the camera and Hamilton is missed in front of it, but director Jonathan Mostow and a trio of scripters thankfully treat the property with respect. Schwarzenegger's back in "good Terminator" mode, this time facing off against a female of the, uh, species (Kristanna Loken). Some interesting plot developments and a smashing (in both senses of the word) chase scene can't quite erase the familiarity of it all, but this is still a valiant effort by all concerned. 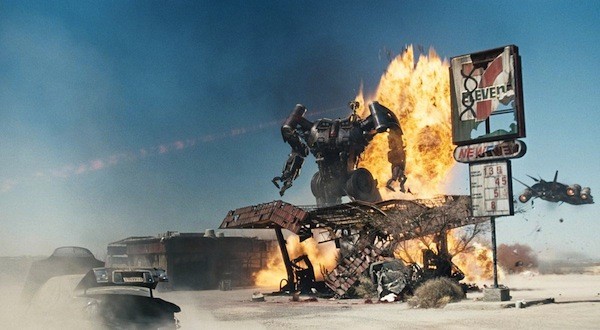 In much the same way as T3, the underrated Terminator Salvation (2009) doesn't especially deepen our understanding of the apocalyptic future world first glimpsed in Cameron's original movie, but it's entertaining and engrossing nonetheless. Complaints that the film is too bleak are ludicrous; at any rate, it isn't completely devoid of humor, as witnessed by a few knowing winks at fans of the first films. This isn't a classic Terminator model, but as the fourth line in a brand that was created over a quarter-century ago, it serves its purpose nicely.

Blu-ray extras on The Terminator include a retrospective piece; deleted scenes; and a look at the visual effects. The Terminator 2: Judgment Day Blu-ray includes the theatrical version and an extended special edition; extras include audio commentary by Cameron and co-writer William Wisher; separate audio commentary with 26 cast & crew members; behind-the-scenes featurettes; and interactive games. Blu-ray extras on Terminator 3: Rise of the Machines include three audio commentaries with cast & crew; an introduction by Schwarzenegger; plenty of behind-the-scenes material; and a gag reel. The Terminator Salvation Blu-ray includes the theatrical version and an extended director's cut; extras include the Maximum Movie Mode (basically behind-the-scenes material presented in a picture-in-picture format); a Terminator Mythology Timeline; and a discussion of the franchise.