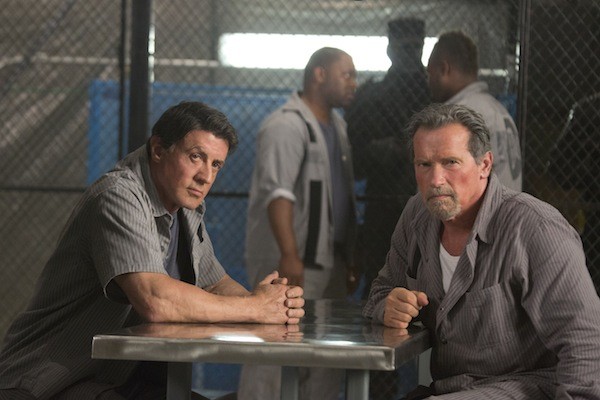 "It's not a tumah!" declared Arnold Schwarzenegger in 1990's Kindergarten Cop, one of the few instances when the muscle-bound actor knew how to properly deliver one of the countless quips that he was handed over the course of his career. Because let's face it: The performers who largely came of age as action stars in the 1980s — Arnie, Sylvester Stallone, Chuck Norris, Jean-Claude Van Damme, Dolph Lundgren, etc. — could outfight and outshoot the best of them, but none could deliver a one-liner that didn't land like a nuclear bomb on a Nevada test site (it took more Everyman actors like Bruce Willis in Die Hard to find the right combo of bruising heroics and smirky humor).

Schwarzenegger, bless his steroid-saturated heart, tried harder than most (even starring in out-and-out comedies like Twins, Junior and the aforementioned Cop), although the majority of the humor he manufactured was due more to recycling familiar lines ("I'll be back") than anything else. So it's something of a surprise to see how loose and giggly he appears in Escape Plan, a new action romp that teams him with Stallone. There's even a scene in which he's preparing to make an exit, and I fully expected him to dig up the old "I'll be back" standby — nope, it's not necessary, as his performance is amusing enough without having to go for the nostalgic kick.

Would that the rest of the film were as engaging as Schwarzenegger; instead, it's a routine programmer that's short on thrills but long on tedium. Stallone headlines as Ray Breslin, who's considered the world's leading expert on prison security. With Lester Clark (a coasting Vincent D'Onofrio) as his boss and Abigail (Amy Ryan) and Hush (Curtis "50 Cent" Jackson) as his accomplices, Breslin is hired by states to land himself in their supposedly escape-proof prisons in order to see if he can break out (thus allowing them to ascertain the weak spots and make the necessary improvements). Naturally, his success rate is high, doubtless spurred in part by his fee of $2.5 million per prison. When a government agent (Caitriona Balfe) offers him $5 million to test a new facility that will be used to hold those undesirables deemed unworthy of trials (terrorists, drug dealers and the like), Breslin reluctantly accepts the assignment. But once inside, he discovers that he's been set up by someone on the outside (no prizes for guessing who; in fact, readers should take it upon themselves to drop by the CL office with penalty cash in hand if they don't figure it out), and that the warden (Jim Caviezel) has no intention of ever letting him leave. Luckily, Breslin finds an ally in another inmate, a hulking, goateed fellow by the name of Emil Rottmayer (Schwarzenegger), and together they plot to break loose. 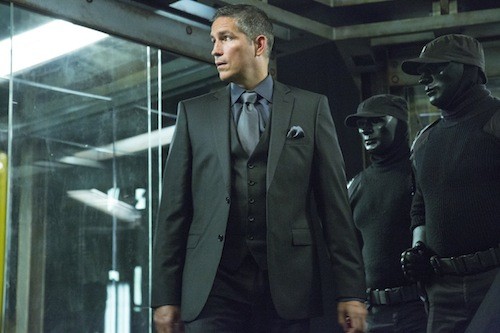 While Stallone and Schwarzenegger both appeared in The Expendables and its sequel, this is being billed as the first time these '80s icons are starring opposite each other in lead roles. It's a logical pairing, given their domination of the action market during that period as well as the way they playfully took digs at each other (as in Last Action Hero, where Arnie's character studies a life-size video-store standup of Stallone as Rambo, feels the bulk of his own muscles, and then smiles and waves off the stand-up). But for all the film's potential, the fireworks never erupt. Despite the shared marquee billing, Schwarzenegger is, as in the Expendables films, still playing second banana to Stallone, who has a much larger role. And while Schwarzenegger is clearly relishing the opportunity to add some eccentric touches to his characterization (there's an amusing scene in which Rottmayer launches into a rambling religious tirade against his captors ... in his Austrian tongue!), Stallone offers nothing new, playing a typically noble-with-a-capital-N hero whose only attempts at humor are lamely insulting Abigail's cooking. Speaking of Abigail, it's sad to see Ryan saddled with such a simplistic role, but at least she manages to deliver a watchable performance — the same can't be said for the hammy Caviezel, one of those actors with the rare ability to underplay and overact at the same time, and the monotonous 50 Cent, who really needs to give up trying to make this whole film-career thing work.

Prison escape films are often fun because we understand the layout and can follow along as the heroes attempt their breakout (the 1963 WWII classic The Great Escape remains the undisputed king of the genre). The problem here is that Barry Chusid's cluttered production design, coupled with the inability of director Mikael Håfström and writers Miles Chapman and Arnell Jesko to successfully map it out for us, means that there's little sense of where the escapees are at any given moment, what direction they have to take and how much further they have to go to taste freedom. Interestingly, Breslin's opening-act breakout from a regular prison, narratively employed to provide some exposition, offers much more in the way of clear objectives, clever tactics and genuine excitement than the showcase one which takes up the bulk of the film. If it weren't such a bother, I would suggest audiences simply enjoy this introductory interlude before making their own great escape into an adjacent auditorium.