Alison Leininger of Savory Spice Shop Breaks Down the Flavor

So you're looking to cook up our dukkah recipe from this week's food feature by Ari LeVaux, but you need to go shopping for the ingredients. We have you covered — at least in terms of getting the freshest flavors.

Savory Spice Shop at Atherton Mill in South End has been the go-to spot for the best spices in Charlotte since 2011, when then-franchise owners Scott and Amy McCabe opened its doors on a Small Business Saturday. The McCabes have since moved on, but the shop remains.

We sat down to put our 3-Course Spiel questions to its current assistant manager, Alison Leininger, who also happens to be a regular CL food writer.

Creative Loafing: If someone needed to get the ingredients for our dukkah recipe, could they get them all here?

Alison Leininger: Yes, and we could sell them just a small amount if they wanted to do just this one recipe. We had a gentleman come in for the holidays who has this proprietary blend he makes every holiday season for his family — he came in just to get four ounces of this and two ounces of that, according to the ratio he needed for that one recipe. You don't have to buy a full $7 jar of something if you're just trying it out or using something for one recipe. We can sell you an ounce, or sometimes even a half an ounce. 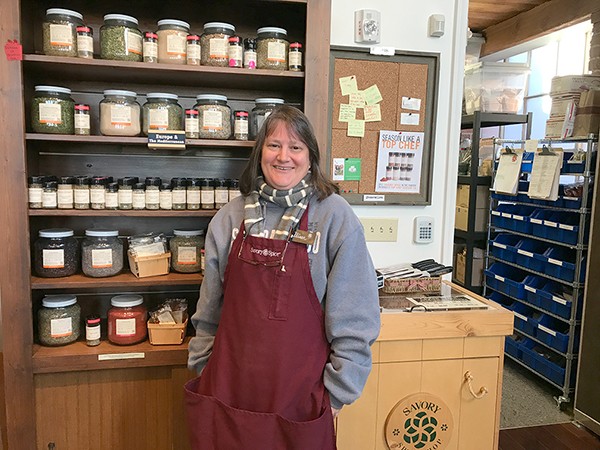 Why would someone shop at a little store like Savory Spice instead of just getting spices at the grocery store?

The primary reason is freshness. For most spices you get, the flavor's carried on the oils, and as soon as you crush or grind that — whether it's a seed or a nut or whatever — the oils will start to evaporate. For a whole spice, you can go up to two years without losing the flavor; for a ground spice, it's anywhere from six to 12 months. When you see spices at the grocery store, that stuff may have been sitting on the shelf for a year. Or it may have been sitting in the warehouse for a year. You have no idea. When you come here, you can taste our spices and you can smell our spices, so you know what you're getting. For example, we sell charnushka [a black nigella seed used in some dukkah recipes] but we don't sell a lot of it, so we don't order a lot of it, and what you get will be fresh.

The other thing is customer service and education. If you have a question, we'll find the answer if we don't already have it. Everybody who works here is really interested in cooking and we're constantly learning more. Also, customers will come in and maybe they have a son-in-law from India and they'll tell us something we didn't know. Customers come up with ideas all the time for how to use certain spices. So we take that in and share it, and we also have a ton of information ourselves just from our training. Someone will come in and say, "I was just hunting and I got some duck. What do you have for that?" and we'll have the answer.

Savory Spice is a company based in Colorado, with stores in other cities, but this shop has a very local vibe. How have you managed to maintain that?

I attribute it to the original franchise owners, Scott and Amy, who made it such a fantastic atmosphere for both shopping and working. Amy worked hard to establish relationships with a lot of local restaurants and breweries and bakeries and coffee shops and that kind of thing. Papi Queso was just in here earlier today. Haberdish was in here today. Diana Sapp, who's opening Undercurrent Coffee on Commonwealth Avenue, recently contacted us because she's doing a coffee festival called Pour and she wanted to do some tie-ins. She told us, "When I think of local coffee, I think of Savory Spice because everybody uses your stuff." We are very, very plugged in to this community.