All the right moves | Reviews | Creative Loafing Charlotte
Switch to the mobile version of this page.

All the right moves 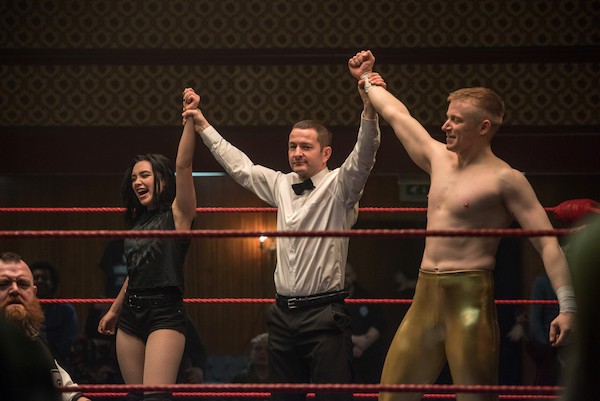 One need not be a wrestling fan to enjoy Fighting with My Family (*** out of four), a guaranteed crowdpleaser sure to entertain even those who just always assumed that Hogan was the surname of The Incredible Hulk rather than a lord-of-the-rings superstar in his own right.

Turning to both real life and a 2012 documentary for his source material, writer-director Stephen Merchant (co-creator of BBC’s The Office) examines the odyssey of Saraya Bevis (Lady Macbeth’s Florence Pugh), who hails from a family jam-packed with wrestlers. Under the proud tutelage of their parents Patrick (Nick Frost) and Julia (Lena Headey), Saraya, calling herself “Paige” in the ring, and her brother Zac (Jack Lowden), known as “Zac Zodiac,” devote their lives to landing a tryout with the WWE (World Wrestling Entertainment). They succeed, but after carefully screening all the applicants, only Paige is chosen by the trainer-scout (Vince Vaughn) to continue the path to possible WWE stardom. Among those sent packing is Zac, who must return to their Norwich, Norfork home in England while Paige heads to Florida for further tryouts.

Co-produced by Dwayne Johnson (who also appears as himself), Fighting with My Family is full of rowdy humor (much provided by a garrulous Frost) and introspective moments (most provided by a perfectly cast Pugh), but what elevates the movie’s game is its willingness to also follow Zac as he copes with crushing disappointment. If Paige’s journey infuses the piece with spirit, Zac’s ordeal provides it with poignancy, and the resultant tag team of emotions makes it easy to cheer for this family and this film.

Speaking of Film Review, Fighting With My Family