An Early Thaw | Features | Creative Loafing Charlotte
Switch to the mobile version of this page. 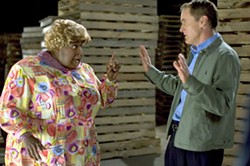 As the 2006 releases begin to filter into local movie auditoriums -- Hostel, Glory Road and Last Holiday were among the first batch of new year offerings -- they're having to share theater space with the 2005 titles that aren't quite ready to go away.

The Chronicles of Narnia and King Kong are still doing solid business at the box office, while Brokeback Mountain will continue to expand its Charlotte theater count in the coming weeks. Meanwhile, plenty of other year-end contenders haven't even opened here yet, among them Caché, Mrs. Henderson Presents and Transamerica. (The Matador is finally opening this Friday; see review in this section.) This means that, for a while anyway, 2006 will continue to look a lot like 2005.

But the cinematic floodgates will be busting open soon enough; to that end, here's a checklist of the 50 flicks scheduled to debut between now and the beginning of the summer movie season.

JANUARY 27: A young man (James Franco) from a poor family has trouble fitting in at the Naval Academy until he takes part in a boxing competition in ANNAPOLIS ... Martin Lawrence returns as the FBI agent with a knack for dressing up in granny's garments to thwart the bad guys in BIG MOMMA'S HOUSE 2 ... Based on Christianna Brand's "Nurse Matilda" books, NANNY MCPHEE stars Emma Thompson (who also scripted) as the title character, whose presence in the household of a widower (Colin Firth) and his seven rambunctious children leads to unexpected developments.

FEBRUARY 3: In the romantic comedy SOMETHING NEW, a black businesswoman (Sanaa Lathan) falls for a white architect (Simon Baker), only to be forced to make a decision when a seemingly perfect man (Blair Underwood) arrives on the scene ... WHEN A STRANGER CALLS, a remake of the minor 1979 hit, concerns the efforts of a babysitter (Camilla Belle) to escape a psychopath who's terrorizing her.

FEBRUARY 10: The animated family film CURIOUS GEORGE, featuring the internationally recognized star of a series of children's books, finds the little monkey involved in various big-screen shenanigans, all the while accompanied by The Man With the Yellow Hat (voiced by Will Ferrell) ... Tired of their grown son (Matthew McConaughey) living at home, two parents (Terry Bradshaw and Kathy Bates) hire a savvy woman (Sarah Jessica Parker) to permanently get him out of the house in the romantic comedy FAILURE TO LAUNCH ... More teens are slated to die, this time at an amusement park, in the horror sequel FINAL DESTINATION 3 ... A bank security expert (Harrison Ford) must crack the system he designed if he hopes to save his wife (Virginia Madsen) and kids from a merciless criminal (Paul Bettany) in FIREWALL ... The long-delayed comedy THE PINK PANTHER finds Steve Martin trying to fill the sizable shoes of Peter Sellers, who transformed the bumbling Inspector Clouseau into a screen icon in a series of popular films.

FEBRUARY 17: DATE MOVIE finds two of the countless screenwriters from the Scary Movie franchise spoofing Meet the Parents, Mr. & Mrs. Smith, My Big Fat Greek Wedding and seemingly every other hit from the past few years in this yarn about a couple (Alyson Hannigan and Adam Campbell) dealing with obstacles to their blessed union ... With no Eddie Murphy in sight, DR. DOLITTLE 3 centers on the ability of the doctor's daughter to likewise talk to the animals ... Inspired by a true story, the Disney live-action tale EIGHT BELOW concerns the efforts of eight sled dogs to survive the punishing Antarctica weather until a rescue can be mounted ... Based on Richard Price's novel and inspired by the Susan Smith story, FREEDOMLAND stars Samuel L. Jackson as a detective who questions the truthfulness of a woman (Julianne Moore) who claims her child was snatched by an African-American man ... On her wedding day, a bride (Piper Perabo) unexpectedly falls for a florist (Lena Headey) she spots while on the way to the altar in the romantic comedy IMAGINE ME & YOU.

FEBRUARY 24: Before he hosts the Oscars on March 5, Jon Stewart will be heard in the animated fantasy DOOGAL, in which three friends (Whoopi Goldberg, William H. Macy, Jimmy Fallon) and their dog Doogal (Kenan Thompson) try to prevent an evil sorcerer (Stewart) from freezing the sun and destroying the earth in the process ... A fledgling mobster (Paul Walker) maneuvers to recover a gun used in a hit before it's found by the cops in RUNNING SCARED ... It was almost exactly a year ago that Tyler Perry's Diary of a Mad Black Woman proved to be a sleeper hit, so now we get TYLER PERRY'S MADEA'S FAMILY REUNION, with Perry again dressing in drag to play the outspoken family matriarch Madea ... The futuristic sci-fi flick ULTRAVIOLET stars Milla Jovovich as a member of a race of genetically modified super-humans trying to protect themselves from the government that created and now wants to destroy them.

MARCH 3: Two teenage girls (Emma Roberts and Joanna "JoJo" Levesque) discover a mermaid in a swimming pool in AQUAMARINE ... The freewheeling concert film DAVE CHAPPELLE'S BLOCK PARTY, directed by Michel Gondry (Eternal Sunshine of the Spotless Mind), is exactly what the title promises, with the popular comedian performing his stand-up material while accompanied by such hitmakers as Kanye West, Mos Def and Erykah Badu ... A smash hit in its Russian homeland, NIGHT WATCH (NOCHNOI DOZOR) is the first entry in a trilogy based on Sergei Lukyanenko's sci-fi novels; it relates how the centuries-old battle between good and evil has been upset by the emergence of a figure known as "The Other" ... Arguably worse than run-of-the-mill spam, the cryptic e-mail making the rounds in PULSE (the latest remake of a Japanese horror flick) causes the recipients to commit suicide ... 16 BLOCKS is the distance that a detective (Bruce Willis) on the skids must escort a small-time criminal (Mos Def) without getting killed by those hoping to stop them from reaching the courthouse steps.

MARCH 10: Given the recent remakes of The Texas Chainsaw Massacre, Dawn of the Dead and The Amityville Horror, it only makes sense that THE HILLS HAVE EYES, based on Wes Craven's 1977 yarn about tourists being slaughtered by mutant mountain folks, would be hitting the multiplexes ... OutKast members Andre Benjamin (Andre 3000) and Antwan A. Patton (Big Boi) star in the original musical IDLEWILD about two musicians working at a Southern speakeasy during the 1930s ... After appearing in such dogs as Christmas With the Kranks and Joe Somebody, Tim Allen gets to play one in THE SHAGGY DOG, a remake of the 1976 Disney film (The Shaggy D.A.) in which a district attorney gets transformed into a canine.

MARCH 17: In what sounds like a modern-day take on Shakespeare's Twelfth Night, SHE'S THE MAN finds Amanda Bynes as a student who disguises herself as her twin brother (James Kirk) in order to attend his boarding school, only to fall for his roommate (Channing Tatum) ... Although set in England rather than the United States, V FOR VENDETTA qualifies as wish fulfillment for concerned Americans, as it centers on a disillusioned nation in which the tyrannical evildoers in charge are confronted by freedom fighters (among them Natalie Portman's Evey and Hugo Weaving's "V") interested in reclaiming their democracy.

MARCH 24: Spike Lee directs his most commercially accessible film yet: INSIDE MAN, in which the power struggle between a cop (Denzel Washington) and a bank robber (Clive Owen) becomes even more unpredictable thanks to the machinations of a power broker (Jodie Foster) on the scene ... Looking like a cross between the documentary Mad Hot Ballroom and every inspirational high-school drama that comes to mind, TAKE THE LEAD stars Antonio Banderas as an instructor who brings the art of ballroom dancing to an inner-city school in New York.

MARCH 31: ATL is set in, yes, Atlanta, and follows four teens as they listen to hip-hop and hang out at their favorite skating rink ... Sharon Stone reprises the role that made her a star in BASIC INSTINCT 2, which finds Catherine Tramell matching wits with a criminal psychologist (David Morrissey) in London ... The animated sequel ICE AGE 2: THE MELTDOWN finds the original's animal stars (including the scene-stealing Scrat) trying to prevent a glacial dam from breaking and flooding the entire valley ... In LUCKY NUMBER SLEVIN, an innocent bystander (Josh Hartnett) finds himself embroiled in a gang war involving two mob bosses (Morgan Freeman and Ben Kingsley), a seasoned assassin (Bruce Willis) and a diligent detective (Stanley Tucci) ... A small town confronts a deadly creature from beneath the earth's surface in the horror comedy SLITHER.

APRIL 7: A cast from Hell -- Rob Schneider, David Spade and Jon Lovitz -- pools its, uh, talents for THE BENCHWARMERS, a comedy about three spastic baseball players ... A young boy (Logan Lerman) leads the good fight to save endangered owls in HOOT, adapted from Carl Hiaasen's book ... Mo'Nique stars as one of the PHAT GIRLZ, afraid that her "plus" size will prevent her from finding Mr. Right.

APRIL 14: AMERICAN DREAMZ, written and directed by Paul Weitz (About a Boy), centers on a shallow US President (Dennis Quaid) who becomes a celebrity judge on his favorite TV series, an American Idol-like show hosted by a cynical Brit (Hugh Grant) ... The latest installment in the series that won't die, SCARY MOVIE 4 stars franchise vets Anna Faris and Regina Hall, features cameos by (among others) Dr. Phil and Shaquille O'Neal and takes aim at War of the Worlds, Million Dollar Baby, Saw and Ingmar Bergman's Wild Strawberries (OK, just kidding on that last one) ... With a plotline that sounds like Madagascar 2, the animated feature THE WILD focuses on the efforts of various zoo animals to save their lion friend (Kiefer Sutherland), who's been accidentally shipped from a New York zoo to an untamed wilderness in Africa.

APRIL 21: Tired of college rejection letters, a high school senior (Justin Long) and his buddies create a fake university from the ground up in the comedy ACCEPTED ... A Secret Service agent (Michael Douglas) finds himself framed for the murder of a colleague in THE SENTINEL, costarring Kiefer Sutherland, Kim Basinger and Desperate Housewives' Eva Longoria ... SILENT HILL stars Radha Mitchell (Pitch Black) as a mother who hopes that the secret behind her daughter's mysterious illness can be found in the title burg.

APRIL 28: With spelling bees now considered a viable screen subject (Spellbound, Bee Season), AKEELAH & THE BEE joins the list with its tale of an 11-year-old girl (Keke Palmer) who enters a spelling contest with the support of her tutor (Laurence Fishburne) and against the protests of her mother (Angela Bassett) ... The first of the year's two major 9/11 dramas (Oliver Stone's World Trade Center is due in August), Paul Greengrass' FLIGHT 93 focuses on the passengers whose valiant efforts against the terrorists hijacking their plane prevented further casualties on that modern day of infamy ... Barry Sonnenfeld (Men In Black) directs Robin Williams in RV, a comedy about a self-centered man who bonds with his family during a cross-country trip ... An outcast (Missy Peregrym) finds her calling as a gymnast in STICK IT, costarring Jeff Bridges ... WAIST DEEP stars Tyrese Gibson as an ex-con known as 02, who hopes that his unscrupulous cousin Wanna Be (Larenz Tate) and his hustler friend Coco (Meagan Good) will help him rescue his son from the clutches of gang leader Meat (played by rapper The Game).